Two collisions in New Brunswick and North Brunswick are under investigation.

Authorities responded to the area of Lee Avenue and Seaman Street in New Brunswick following the report of a hit-and-run involving a pedestrian at around 10:48 p.m. Sept. 10.

Upon their arrival, authorities located a male who sustained injuries. The victim was transported from the scene to a nearby hospital for medical treatment where he was treated for his injuries, according to information provided by Middlesex County Prosecutor Yolanda Ciccone, Director Anthony A. Caputo of the New Brunswick Police Department, and Chief Joseph Battaglia of the North Brunswick Township Police Department.

Shortly thereafter, at approximately 10:50 p.m. authorities responded to a crash on Georges Road in North Brunswick, involving a collision between a car and a van. The driver of the car was extricated from the vehicle and transported to a nearby hospital where he was pronounced dead, according to the statement.

A male was also transported to a nearby hospital for medical treatment.

The occupants of the van sustained varying injuries and were transported to a nearby hospital for treatment where they are in stable condition, according to the statement.

The names of all parties have been withheld pending notification to the next-of-kin.

It was unclear if the two accidents were related.

Anyone with information should call Traffic Safety Officer Jason Vallese of the North Brunswick Police Department at 732247-0922, ext. 318, or Detective Jonathan Berman of the Middlesex County Prosecutor’s Office at 732-745-4328. 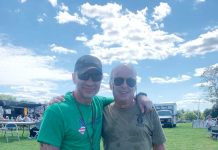