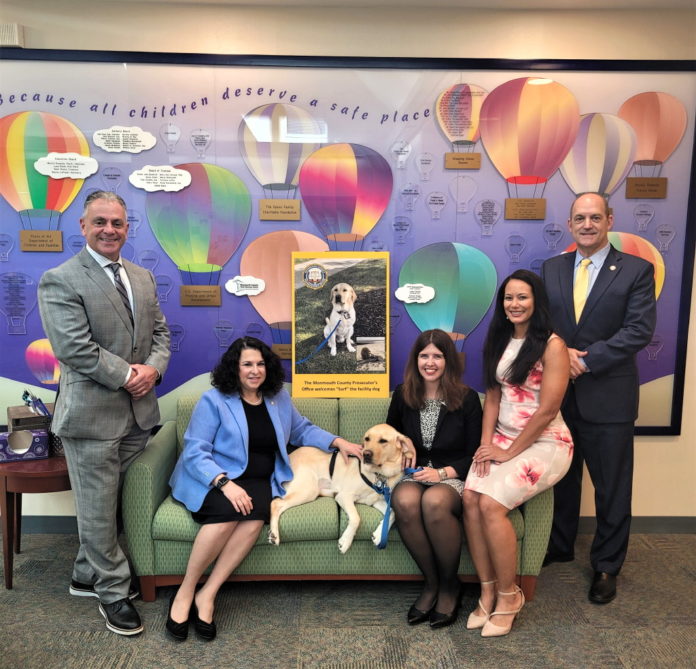 The newest member of the Monmouth County Prosecutor’s Office brings years of rigorous training, a relentlessly affable attitude and an unwavering commitment to service to his role. He recently marked his first day on the job, having been assigned to the Monmouth County Child Advocacy Center in Freehold Township. He is also 4 years old and covered in fur.

Surf the facility dog, a yellow Labrador retriever, will meet with young victims of abuse from across the county at the Child Advocacy Center two days per week, as the centerpiece of a new therapy initiative that has been shown to lessen victim anxiety and improve outcomes of investigations into such crimes, according to a press release from the Monmouth County Prosecutor’s Office.

“Our Child Advocacy Center is meant by design to offer a warm, welcoming
environment for our most vulnerable crime victims as they recuperate, and Surf’s
arrival here brings that to another level entirely,” Acting Monmouth County Prosecutor
Lori Linskey said. “We couldn’t be more thrilled to have him join us.”

Surf’s arrival was more than two years in the making, made possible in great part
by someone who has been working at the Child Advocacy Center long before that, according to the press release.

Melissa Boege, program director of the Family Growth Program of Monmouth and
Ocean Counties for Catholic Charities, has provided therapy to children, teenagers and
adults there since 2014.

In 2019, the California-based nonprofit group Canine Companions placed Surf with her permanently.

“The children I work with have expressed ongoing enthusiasm about working with a facility dog and have talked extensively about how the dog will help them feel better, talk about difficult things and feel comfortable in therapy,” Boege said.

“It is incredible to witness; children who were previously shy, anxious, disengaged and
defiant become interested, engaged, enthusiastic, open and connected,” she said.

Surf and Boege started working together with clients at the Family Growth Program’s Red Bank location several months after Surf’s arrival in New Jersey, and that same autumn they started visiting public and private schools across Monmouth County to present “Safety Steps,” a series of abuse-prevention workshops. So his newest assignment will not be his first rodeo.

“Surf has the ideal temperament to perform this unique brand of work; he is naturally calm, nurturing and reassuring, while also responding enthusiastically to children and adults who prompt him to show a more playful side,” Child Advocacy Center Multidisciplinary Team Coordinator Debbie Riveros said. “He fits in perfectly with our team.”

Facility dogs fall under a definition that sets them apart from service dogs or therapy dogs, according to Canine Companions.

To be designated as such, the dogs are expertly trained from birth, trustworthy in professional environments and able to perform more than 40 commands, according to the press release.

To be designated as a “facilitator,” as Boege is, one must be solely responsible for handling and caring for a facility dog, and also committed to long-term employment at a specific location for a minimum of 20 hours per week.

There are a limited number of facility dogs already serving at some of the more than 900 child advocacy centers nationwide, which serve more than 338,000 children annually, according to the National Children’s Alliance, the primary professional organization dedicated to supporting the model.

But that number is growing, with studies showing that use of facility dogs during therapy sessions drastically reduces anxiety among child abuse victims, drastically increasing the
likelihood of disclosure, according to the press release from Linskey’s office.