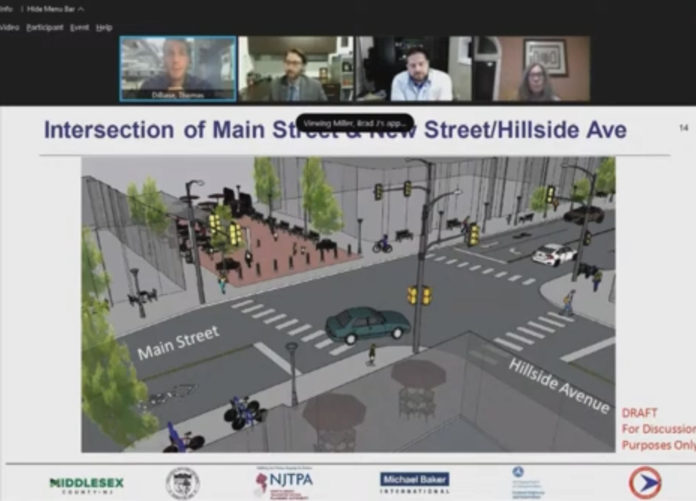 METUCHEN — A spirited debate has begun as borough officials seek input on whether or not to close New Street to Pearl Street and create a pedestrian plaza in efforts to create a safer intersection at Main Street and New Street/Hillside Avenue.

“There are so many passionate perspectives on this topic, including very important safety considerations, the significant amount of traffic in the borough, business impacts, and many other factors that will be considered by our Borough Council members and me,” Mayor Jonathan Busch said in a social media post on Sept. 22.

The mayor took to social media to ask the public to be civil with one another when debating the topic, which in some cases included “personal attacks, conspiracy theories and all out vitriol toward one another.”

“This type of dialogue has become commonplace in some communities, but has no place here,” he said. “Metuchen is better than that. Governing can be difficult and decision-making can sometimes take a while. The most comprehensive results typically come from deliberative processes like the one currently underway. We will carefully consider every comment that has been submitted through the NJTPA (North Jersey Transportation Planning Authority), but it is imperative that we maintain civility in doing so. We all have the same goal of making our community safer but we have to remember that even when our opinions are different, we are strongest when we work together.”

Borough officials are discussing several alternatives to increase pedestrian and motor vehicle safety at the intersection of Main Street and New Street/Hillside Avenue.

“This is the heart of our downtown,” Jay Muldoon, director of special projects, said of the area. “We know it’s a busy intersection … unfortunately it’s the most dangerous pedestrian intersection that we have. There’s no question we have a huge problem here.”

Borough officials joined representatives from NJTPA, Michael Baker International, engineering and consulting firm based in Pittsburgh, and Middlesex County for a second virtual public information center meeting on Sept. 20 to inform local residents, officials and businesses of the safety improvement project along Main Street between Talmadge and Brunswick avenues. The first meeting was held in October 2020.

The main focus of the second meeting was the intersection of Main Street and New Street/Hillside Avenue. The intersection has seen nine pedestrian strikes from 2014-19 and numerous near-strikes.

“Our goal is to improve pedestrian safety,” Muldoon said. “We want to avoid any degradation of our traffic situation and to make downtown, especially at this intersection, a much more viable and safe place.”

“Hillside [Avenue] and New Street are not aligned with each other and presents some difficulty for motorists that are making turns,” Miller said.

Miller and DiBiase presented two alternatives to reduce the conflict points. Alternative One includes leaving New Street between Main and Pearl streets as one lane of traffic. In June 2020, borough officials approved a business revitalization strategy, which closed the one side of the street from Friday to Sunday for outdoor dining due to the novel coronavirus pandemic. In November, officials extended the closure to the entire week.

The closure, officials said, has reduced the number of pedestrian strikes and near-strikes.

The only downside to Alternative One is the removal of 15 Main Street parking spaces, DiBiase said.

Alternative Two provides more crossing opportunities on Main Street every 60 seconds and pedestrians traveling north and south on the western sidewalk will no longer have to wait at the signal, officials said.

DiBiase and Miller provided examples of successful pedestrian plazas, including Division Street in Somerville and Newark Avenue in Jersey City.

Councilman Jason Delia said if the creation of a pedestrian plaza moves forward, the community would be involved in discussions to create it into what makes sense for the borough.

In January 2018, borough officials announced the receipt of a $9.3 million grant from the NJTPA to the County of Middlesex.

The grant for the project is through the NJTPA’s fiscal year 2017-18 local safety program, which is federally funded in conjunction with the New Jersey Department of Transportation (DOT). It is funded through the Federal Highway Administration’s Highway Safety Improvements Program, which advances safety improvements on county and local roadways.

The funds will be used to support Metuchen’s efforts to improve public safety, pedestrian safety, traffic signals and eliminate trucks from striking the Main Street railroad bridge, which is overseen by Amtrak, NJ Transit, the county and the borough.

The grant includes funding a little over $1 million for design and $8.4 million for construction and construction inspection services, according to Christine Mittman, manager of safety programs for local project development at NJTPA.

The approved project will cover a 1.1-mile stretch of Main Street and is one of 14 throughout the state, but the only one approved in Middlesex County.

Main Street, also known as Route 531, serves as the borough’s downtown commercial business area. It is one of the main arteries feeding traffic in and out of the borough. The corridor sees significant pedestrian traffic and includes a NJ Transit rail station.

Mittman said the project is ready to move forward to final design after input on how to proceed with the intersection of Main Street and New Street/Hillside Avenue.

Written public comment and suggestions can be sent to Ron Sendner, county engineer with the Office of Engineering, Department of Transportation up to Oct. 5. A suggestion form is available at www.MainStreetMetuchenSafetyProject.com.