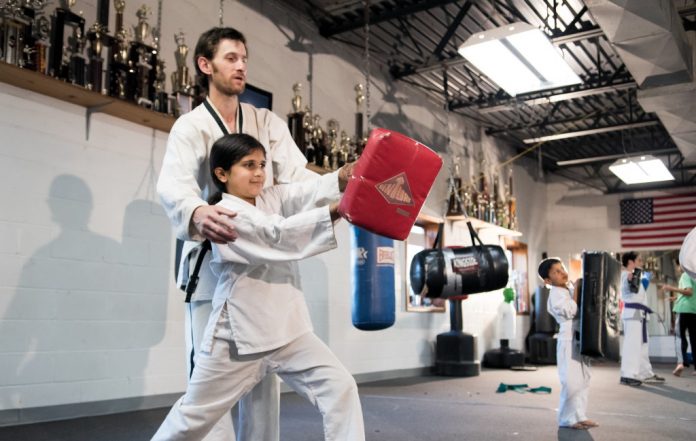 Sofia Shumsky, 15, and Cameron Massay, 14, earned a spot on the national team by winning at AAU National Team Trials held at the end of July in Houston.

Both athletes are 3rd Degree Black Belts and trained for the past 11 years with Master Charles Ferrone and Master Gabriel Basalatan at Fastkix Taekwondo, Spotswood.

“This is my second time making it. And it’s exciting making it with my teammate, we get to travel together,” Sofia said.

Cameron, now a freshman, began Taekwondo when he was 5 or 6, “and I wasn’t doing any sports then and my parents said I had a lot of energy so they just signed me up.” He was only 10-11 years old when he first made the team.

“At that age, all you have to do is win nationals, you don’t have to compete at the team trials process. Sofia won team trials before in the past. This is their first time doing it together where they both had to go compete against the top four athletes in their division. So it was just a little extra special,” Ferrone said.

Sofia, now a junior, said everyone around her neighborhood was enrolled in Taekwondo, so her parents signed her up.

Ferrone explained that Nationals are once a year, and the athletes compete year-round for that one event.

“Now when they win, they’ve got to make it to team trials. So they [Sofia and Cameron] went to a team trial in Houston this year and they have to fight the top four athletes from their division at nationals and they fight in a round robin format. Whoever has the best record at the end gets the national team spot.

“So, that’s something that is just a really big goal for us and that we shoot for every year. And it’s not often you get one person to make the team, so to have two is pretty special. They live in the same neighborhood together. It’s just kinda cool – they started together, they came up together, they made the team together, and everything like that.”

In the summer the athletes trained every day, and did two sessions every day and fought and trained and prepared. They do strength and conditioning training, like ladders, cardio, running – very similar to training for soccer, Sofia said.

The schedule may lighten a bit with the school year beginning.

“I wasn’t that nervous because I’m in my last year for my age division and in my previous years at nationals I did pretty well even though I was younger, so I was pretty confident,” Cameron said.

“For me, I wasn’t as nervous because I’ve beaten some of the girls that I was going to fight in my division, and it wasn’t my first team trials so I knew what to expect,” Sofia said.

Ferrone said from a spectator’s point of view, sometimes the sport is hard to understand.

“I think that’s something the game is trying to change a little bit, where the viewers from the outside, even if you don’t know much about the sport, can figure out what is going on. I’m glad to see it moving in that direction.

“This year in the Olympics we actually just had the first female to win the Olympic gold medal. We had the opportunity to meet her a couple times and see her at a couple events and watch her compete up close in person, so that’s pretty motivating for the kids.

“We’re a part of Global Athletes United which Anastasija Zolotic’s (Olympic Gold Medalist) original coach is from the same organization, and we get to work pretty closely with him, so it’s pretty cool stuff,” Ferrone said.

Now that the two have secured their spot on the team, Sofia said she looks forward to traveling, while Cameron said he wants to visit new places to spar against new people.

“There will be an international tournament. It’s not totally decided where they’re going yet, I know they’re going between South America somewhere, we heard that Europe might be in there. I know the AAU organization is still working out all of the little details, but we’re hoping for somewhere fun. I don’t know exactly when it’ll be; I want to say early 2022,” Ferrone said.

Ferrone’s father owns Fastkix Taekwondo, which is opening another location in Matawan.

“It’s something I’ve been doing since I was 3 years old, so I’ve just stuck with it. It’s Taekwondo, then it became a job for me, then I got more involved on the business side of things, now I’m running the team where I used to be competing. It’s just been my whole life,” he said.

As for the future, Sofia and Cameron said they both plan to continue practicing Taekwondo after high school.