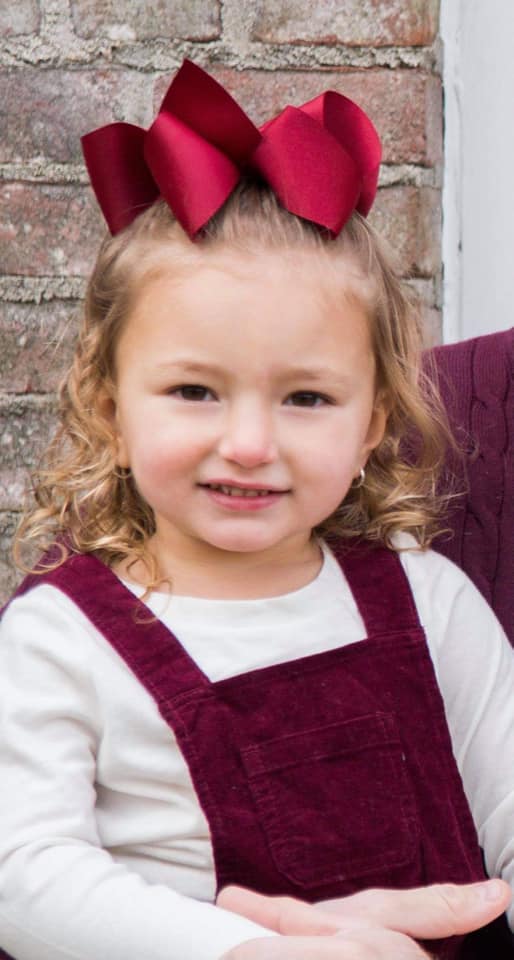 As a writer, sometimes things come to you. You don’t know why, but they do. Sometimes you are assigned to write something, write a story, and at times, a story finds you.

Baskets. We received a message regarding an ad placed on Facebook Marketplace for baskets we had for sale. The person wanted to purchase them and said that they needed them for a tricky tray. There was some back and forth about the exchange and the woman said the baskets were being used for a charity for a child with cancer, for an event to be held in Edison.

Immediately our thoughts went in an entirely different direction – a child with cancer. You know what, we don’t need the money, we’ll donate them. We brought the baskets up to Clark to the woman’s place of business. Noreen Croteau was grateful and emotional when we delivered the baskets. And then she told us all about a golf event and dinner, all for a close friend’s granddaughter.

We were so touched by what we were being told, and I immediately had to find out more. I was able to reach the child’s grandmother, Lucille Capone, a resident of Roselle Park, and she shared the story with me about her granddaughter.

Three trips to the emergency room over the next five weeks proved fruitless. The attending physicians diagnosed myriad things – a virus, an infection, gastro blockage, etc, always believing the problem was gastrointestinal. Several X-rays and MRIs were conducted, and two rounds of antibiotics were prescribed.

Nothing seemed to help.

And still no answers.

In the meantime, Charley was getting sicker – not eating, unsteady on her feet, and worsening headaches.

Given the COVID-19 situation at that time, there were no in-person doctor visits, which made the situation even more frustrating for the family as they were just looking for answers and help for Charley.

Their search led them to a pediatric gastroenterologist who conducted a virtual exam with Charley and her mother on Jan. 20 – three months after the symptoms began. The doctor scheduled an in-person appointment for a date in February.

However, the next morning, Nicole received a call from the doctor. The doctor told Nicole that she was up all night thinking about Charley. She asked Nicole to take Charley to the emergency room at Hackensack Meridian Jersey Shore University Medical Center in Neptune City for a CAT scan of her chest, neck, and head, and that she would set it all up for her.

Nicole arrived at the ER at around 8 p.m. that same night and a CAT scan was performed. A mass was found on the base of her brain, near the spinal cord about the size of a strawberry. Within a few hours, Charley was airlifted to CHOP (Children’s Hospital of Philadelphia). Mom Nicole accompanied the terrified Charley on the bumpy helicopter ride to Philadelphia while dad Steven rushed to meet them by car as no one could have expected this turn of events. It was only supposed to be a quick scan and suddenly the family is being whisked away.

Within hours, emergency surgery was performed to remove the mass.

Why, after so many examinations and consultations, was there no answer? Why did this one doctor, all of a sudden, think of this, which would seem to be out of the area of their concentration and expertise? Who was this doctor? I asked Grandmother Lucille to get me the name of the doctor, wanting to ask that question, knowing that they probably wouldn’t talk to me.

The doctor? Brittany Parlow, a pediatric gastroenterologist in Neptune City. Now, why did that name sound familiar? I Googled the name and found an old Facebook post welcoming Dr. Parlow to the practice. Lo and behold, I see a very familiar name “liking” the post. And so I sent the person, a close friend and classmate from high school, a private message.

“Hey Jerriann! Quick question…do you know a Dr. Brittany Parlow? She is a pediatric gastroenterologist.”

So that’s when it all made sense for me…why I had to write this.

Dr. Parlow was able to find what nobody else seemed to even consider.

But the nightmare for Charley was just beginning.

Charley did well to get through the surgery and was sent home after a 10-day stay. But then came 33 rounds of radiation treatment. 33. Every day for six weeks the family made the trip from their home in Manalapan to CHOP in Philly. And because Charley is so young, she needed to be put under anesthesia to receive the treatments, requiring a port to be placed into her chest so that she could receive the anesthesia and medication with the least amount of trauma.

And there are so many difficulties that come along with it. During the first month’s treatment, Charley developed sepsis – a serious condition resulting from the presence of harmful microorganisms in the blood or other tissues and the body’s response to their presence, potentially leading to the malfunctioning of various organs, shock, and death. She ended up being hospitalized for two weeks as a result.

The second round saw her develop another infection, resulting in a 10-day extension of her scheduled one-week stay.

Charley was enduring a lot and, as you could well expect, ”I miss my hair.”

At that point, a feeding tube was inserted so that she could get the nutrition and medication that she required, that she couldn’t consume orally.

One of the medications irritates the lining of the stomach and, during the third round of treatment, she had ulcers that caused so much pain that it delayed Round 4. Her treatment team decided that the harm to her outweighed the benefit and so Round 4 was never given.

Lucille said Charley is home now, the port in her chest has been removed, but the feeding tube remains. She will require physical therapy for walking, and other after-effects of the treatments.

She said that Charley is making progress, gaining weight, her hair had begun growing back, and that she even started preschool.

“You can only imagine what her family is going though, you hold your breath with every scan, actually every day,” said Lucille. “Every time she coughs, sneezes or had a headache you think the worst.”

The medical bills haven’t even all come in yet but the bill for the 33 rounds of radiation alone were $700,000. The family has health insurance, but even with that, the bills are overwhelming.

“I started ‘Staying Strong for Charley,’ a non-profit organization to help raise money for these bills and anything they might need,” said Lucille. “We decided a few months ago to have a fundraiser golf tournament on Oct. 19 at the Metuchen Golf and Country Club. The help of friends, family (like Noreen) has been invaluable. I’ve had strangers send letters and checks to help. It’s been amazing.”

The golf event still has openings for sponsorships and there are tickets available for the dinner.

The website is www.stayingstrongforcharley.com. The organization will continue to raise funds to help other families in need and support the fight for a cure.

“We are grateful for the unbelievable support from friends and family and everyone who has reached out to us,” said Nicole and Steven. “Charley is the most courageous little girl we know and watching her handle all of this with such positivity amazes us and gives us strength. We are so thankful for everyone’s well wishes and prayers. God Bless you all.”

It was tough writing this, for many reasons. As a parent, I can’t fathom what Charley’s parents have to go through. I could never understand what her siblings – six-year-old brother Frankie and five-year-old sister Emma – must be thinking at this point in their lives. I can’t for the life of me imagine what goes through the mind of a child through everything she has had to endure.

But sometimes you just have to stay strong. This time, it was for Charley.

Alan Karmin is a correspondent for Newspaper Media Group.