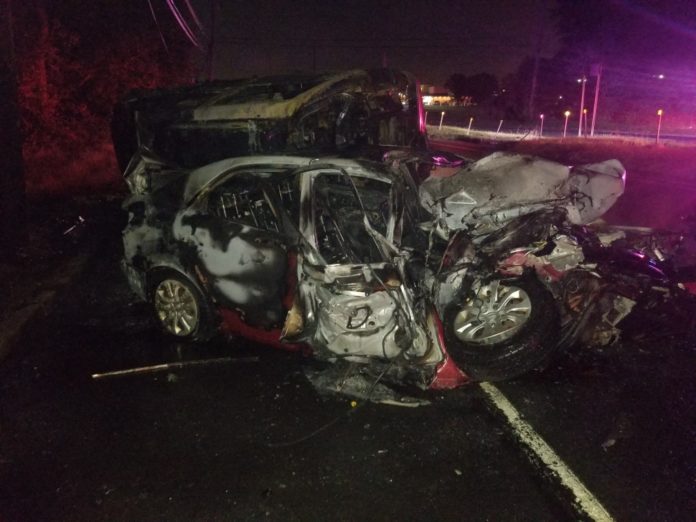 SOUTH BRUNSWICK – South Brunswick police continue to investigate two serious crashes that critically injured one person and left two other people with serious injuries.
Both crashes occurred less than a mile from each other in the Dayton section of the township.

The first crash took place on Oct. 6 at 8:53 p.m. at the intersection of Stults Road at Herrod Boulevard.

A 28-year-old East Brunswick man operating a 2005 Suzuki motorcycle was traveling eastbound when he attempted to pass a 2014 Nissan, operated by a 35-year-old Somerset man, in a no-passing zone, according to information provided by the South Brunswick Police Department.
While the Suzuki was passing the Nissan, the Nissan attempted to make a left turn onto Herrod Boulevard and struck the motorcycle, causing it to lose control and strike a utility pole, according to reports.
The East Brunswick man was taken by South Brunswick EMS and paramedics to Robert Wood Johnson University Hospital in New Brunswick. He was listed in critical condition, as of press time.

A 24-year-old Cinnaminson woman operating a 2010 Kia was traveling northbound on Route 130 when she attempted to make an illegal U-turn across the grass divider, according to police.
When the Kia crossed into the southbound lanes of Route 130, it was struck by a 2003 Ford operated by a 42-year-old man from Browns Mills who was unable to stop in time.
The crash caused both vehicles to catch fire, and both were engulfed in flames by the time the Monmouth Junction Fire Department arrived, according to the statement.
The driver of the Ford received burns and lacerations to his arms and head. The driver of the Kia received a head injury. Both were transported by EMS to Robert Wood Johnson University Hospital in New Brunswick with serious injuries not believed to be life-threatening, according to the statement.

Anyone with information should call the South Brunswick Police Department at 732-329-4646.