A 54-year-old truck driver has been charged in connection with the hit-and-run crash that killed a pedestrian on Brunswick Pike/Route 1 at Bakers Basin Road on Oct. 11, according to Mercer County Prosecutor Angelo Onofri and Lawrence Township Police Chief Brian Caloiaro.

Frank Claybrooks, 54, of Voorhees, was charged with leaving the scene of an accident resulting in death and endangering an injured victim in the crash, which killed Lawrence Township resident Maria Angelica Moran-Moreira, officials said.

Surveillance video and witness interviews revealed that Claybrooks, who was driving a flat-bed tractor trailer, was making a right turn onto Route 1 north from Bakers Basin Road when the crash occurred at 5:55 a.m. The tractor trailer struck the 54-year-old Moran-Moreira, who was in the roadway.

The crash was not reported until 6:38 a.m., when a motorist called police to report that he saw a person down in the roadway. When police arrived, they discovered that a pedestrian – later identified as Moran-Moreira – had been fatally struck by a vehicle. 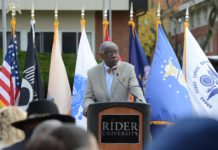