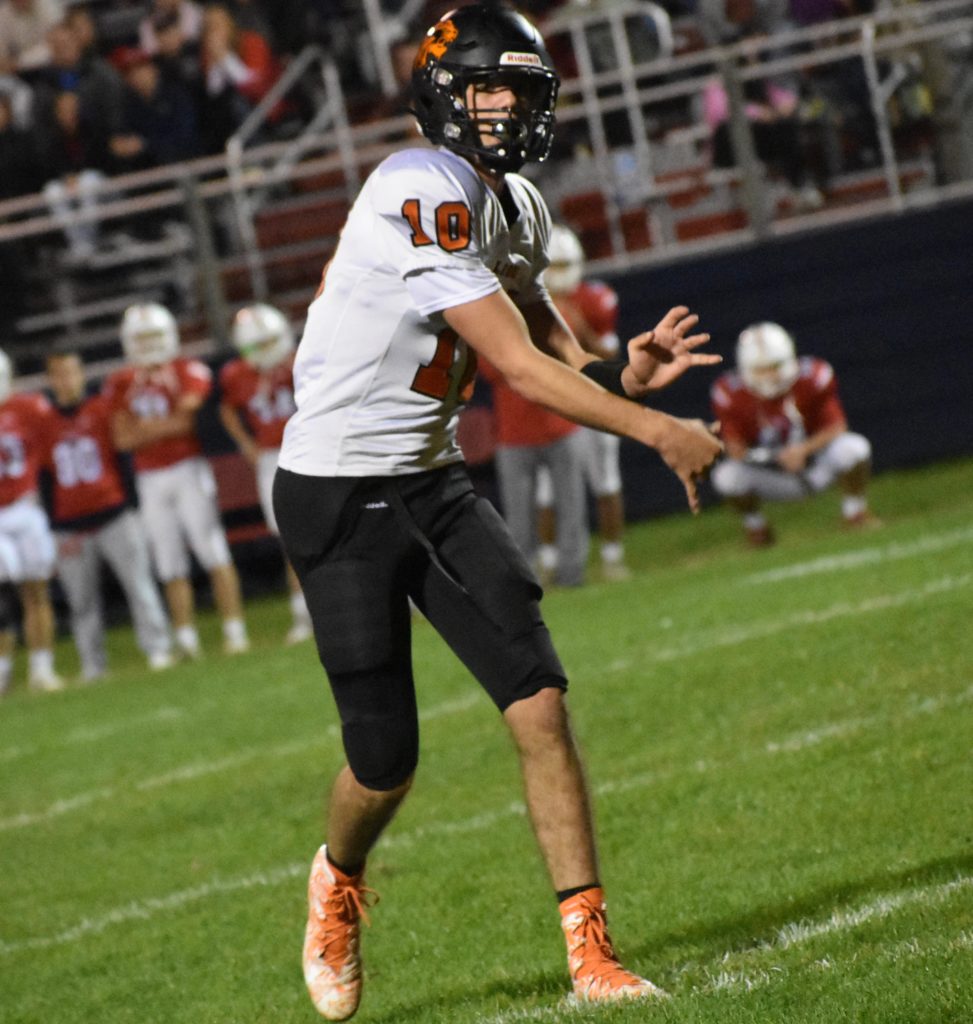 Middletown High School North quarterback Tommy Giannone completes a pass down the field during a game against Wall on Oct. 22 in Wall. Giannone has thrown 13 touchdown passes this season.STEVEN BASSIN/STAFF
× 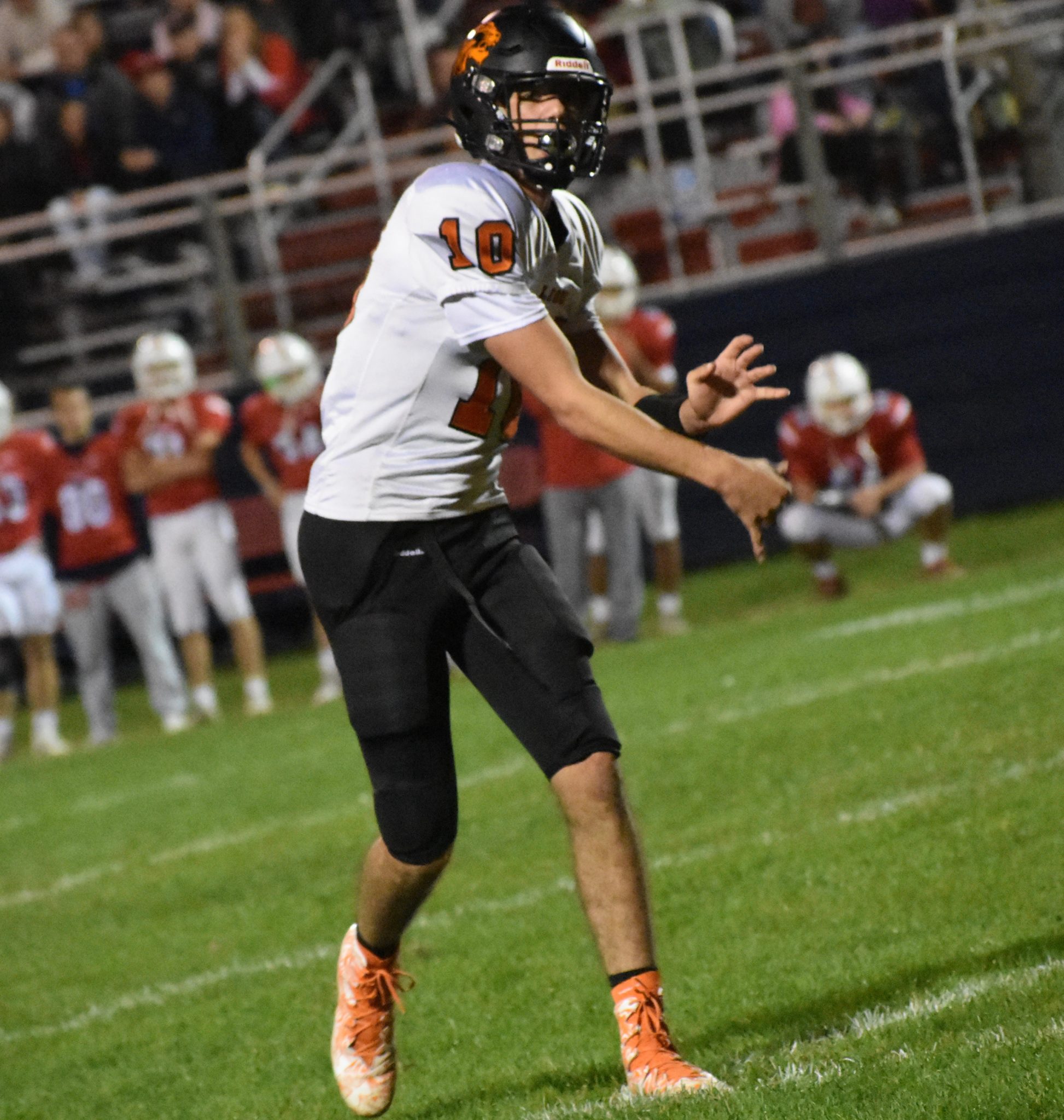 Middletown High School North quarterback Tommy Giannone completes a pass down the field during a game against Wall on Oct. 22 in Wall. Giannone has thrown 13 touchdown passes this season.STEVEN BASSIN/STAFF

MIDDLETOWN – One goal down. One goal to go.

The Middletown North High School Lions have already achieved their first goal of the 2021 football season by winning a share of the Shore Conference Independence Division crown. The co-championship marks the first time Middletown North has won a division title since 1983.

Now the Lions (5-2) are bidding for their second state playoff appearance in three years.

Middletown North currently stands at No. 8 in the NJSIAA North Jersey Group IV power rankings. The top eight teams after this week’s games will qualify for the state playoffs.

The Lions will host Point Pleasant Borough (6-1) in the regular season finale on Oct. 29 and need a win over the Panthers to have a chance to qualify for the state playoffs.

“It was nice to get that (division title) done,” Coach Steve Bush said. “I’m proud of our kids for doing that. That was one of our goals and the next one is to get ourselves into the playoffs and see what we can do from there.”

The Lions won five of their first six games in 2021 and scored three or more touchdowns in victories over Independence Division opponents Brick Township, Brick Memorial and Howell.

The only setback Middletown North suffered in division play was a 29-26 loss to Lacey. Both teams finished 3-1 in the division and will share the league title.

Middletown North’s success has been highlighted by the play of senior quarterback Tommy Giannone, who has thrown for 1,537 yards and 13 touchdowns. Giannone is completing just under 70% of his passes.

“He’s doing a great job,” Bush said. “He understands defenses and different coverages. He can extend plays. He understands what we want to do and he is executing it very well.”

Giannone has several key players around him, beginning with senior tailback Brian Haddow, who has accounted for 1,003 yards of total offense, including 651 yards on the ground and eight rushing touchdowns.

Haddow has also had an impact in the passing game. He leads the team in receptions (30) and receiving yards (352). Haddow has one touchdown catch.

Senior wide receiver Lucas Cerbo has contributed to the offense with 22 catches for 249 yards and one touchdown.

Junior Derek Soto and senior Levi Wilson have also been playmakers on offense.

Wilson has 18 catches for 313 yards and four touchdowns. He has rushed for one touchdown.

The Lions had a chance to take a big step toward a state playoff berth when they faced Wall High School on Oct. 22 in Wall Township. The offense went on an early 16-play drive that ended with a three-yard touchdown pass from Giannone to Searight. The extra point gave the Lions a 7-0 lead.

The Crimson Knights responded with a touchdown and the score was 7-7 going into the second quarter.

Searight has eight catches and four touchdowns in the Lions’ last two games. He caught six passes for 91 yards and two touchdowns in a 24-21 victory over Saint John Vianney on Oct. 15.

Sophomore placekicker Ian Poole-Morgan converted both extra point attempts against Wall and is 19 for 19 this season.

“We are a lot better than what we showed in the second half,” Bush said. “We gave up a couple of big plays on defense and made some mental mistakes. We have to clean those things up and get better. The next one is a big game for us. We have to keep our composure and keep fighting for all four quarters.”