Jack Pelling won the biggest race of his driving career so far on Oct. 23 when he guided Wickedly Innocent to a 6/1 upset win in the New Jersey Sire Stakes – Standardbred Development Fund final for 2-year-old filly pacers at Freehold Raceway.

Counterparty Risk, the winner of the first two legs of the series, got all the action at the windows, according to a press release.

Counterparty Risk went off as the 1/2 favorite, while Winx was the 3/1 second choice. Those two horses raced 1-2 throughout the early stages of the 1-mile race, while Wickedly Innocent rated in fourth.

As the horses moved up the backstretch toward the three-quarter-mile point, Pelling moved Wickedly Innocent after the lead and with a bold rush the filly took the lead around the final turn. She drew off to win by eight-and-a-half lengths in 1:55, with a final quarter of :27 4/5.

The win was Wickedly Innocent’s first from six starts. She finished fifth and third, respectively, in the first two legs of the series. She is owned by Hot Lead Farm, LLC, and trained by Jack’s dad, Brett Pelling.

Sale El Sol got up for second, while Counterparty Risk finished third.

After almost a year on the sidelines, Irish Joe Hanney celebrated his 39th birthday in grand fashion at Freehold Raceway on Oct. 22. He won the first race of his comeback, guiding Angel’s Pride to victory.

Hanney was injured in a spill at Freehold on Oct. 23, 2020 and spent months on the sidelines while recovering from shoulder and knee surgeries, according to a press release.

He made his return with one drive on the Oct. 22 card, Angel’s Pride, for trainer Scott DiDomenico. She went off as the 6/5 favorite in the six-horse field.

Hanney rated Angel’s Pride in third place early on. Sensing a slow pace developing, Hanney pulled and sent his drive to the lead. They easily cleared to the front and established control before the half-mile point.

A native of Dublin, Ireland, Hanney has been based in the United States for more than a decade. He won his first race as a driver at Freehold on May 4, 2012, and has won 281 races lifetime with earnings of more than $1.5 million.

In his most recent full season of driving at Freehold, 2019, Hanney finished 10th in the driver standings with 33 wins from 383 starts. 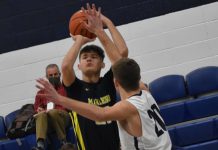