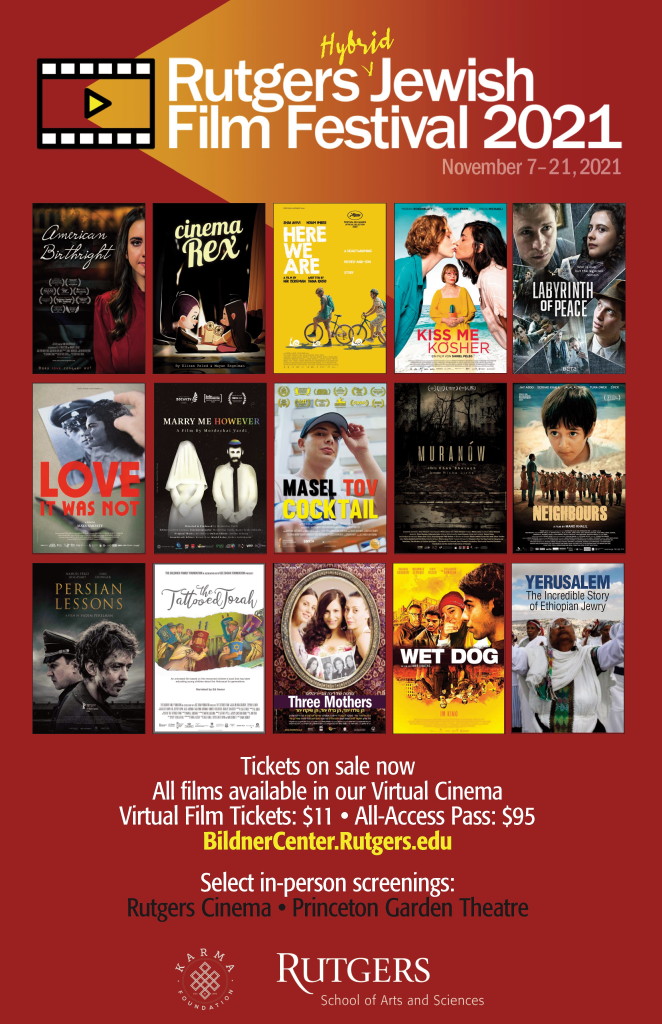 Tickets are now on sale for the 22nd annual Rutgers Jewish Film Festival, which will be held from Nov. 7-21.

Presented in a hybrid format this year – all films will be available in the Virtual Cinema and five film screenings will be presented in person at Rutgers Cinema and the Princeton Garden Theatre, according to a press release.

The festival features award-winning international films from the United States, Israel, Germany and Switzerland, as well as engaging online discussions with filmmakers, scholars and special guests.

Virtual film tickets are $11 and an all-access pass is available for $95. Some films have a limited time frame for online viewing and some are limited by geographic location.

Tickets for in-person screenings must be ordered online through the theaters and will be available Nov. 7, according to the press release.

Campus screenings are free, but tickets must be reserved in advance. All guests must be fully vaccinated and wear a mask in theaters.

The festival is sponsored by Rutgers’ Allen and Joan Bildner Center for the Study of Jewish Life and is made possible by a generous grant from the Karma Foundation.

The festival kicks off on Nov. 7 with “Wet Dog,” a moving German drama that explores complex issues of cultural and religious identity for a Jewish-Iranian teen living in a largely Arab and Muslim suburb of Berlin, according to the press release.

The film is based on Arye Shalicar’s provocative autobiography “Ein Nasser Hund,” and Shalicar will discuss the film on Zoom on the festival’s opening day. The in-person screening of this film is scheduled at Rutgers Cinema on Nov. 13 at 8 p.m.

The festival features the East Coast premiere of the Israeli documentary “Muranow,” named for a Polish neighborhood with a vibrant Jewish past (pre-World War II) that continues to haunt its present.

Director Chen Shelach will discuss the film on Zoom, in conversation with Nancy Sinkoff, professor of history and Jewish studies at Rutgers, according to the press release.

Two other powerful documentaries will make their New Jersey debuts at the festival.

The Israeli film “Marry Me However” is an important follow-up to the groundbreaking film “Trembling Before God” which the Rutgers Jewish Film Festival screened in 2001.

Twenty years later, the film explores the challenges for lesbian, gay, bisexual, transgender and queer/questioning Jews who have entered into traditional marriages in order to comply with Torah laws and to be accepted by their families and religious communities.

“Yerusalem: The Incredible Story of Ethiopian Jewry” tells the moving history of the Beta-Israel community who kept their Jewish faith against all odds for thousands of years.

Israeli director Levi Zini will discuss the film on Zoom. The in-person screening at Rutgers Cinema on Nov. 21 is co-sponsored by the New Jersey-Israel Commission.

The festival will feature online discussions with filmmakers who enrich and enhance the way the audience encounters the films, according to the press release.

Director Becky Tahel will discuss “American Birthright,” her personal journey to understand Judaism’s perspectives on interfaith marriage; Israeli filmmaker Maya Sarfaty will talk about “Love It Was Not,” the riveting true story of an SS officer at Auschwitz who falls in love with and protects a Jewish prisoner – and her testimony 30 years later at his war crimes trial; and Kurdish director Mano Khalil will discuss his new film “Neighbours.”

Inspired by the director’s own childhood, “Neighbours” is set in a Syrian border town in the early 1980s and looks at the absurdities of war through a child’s eyes.