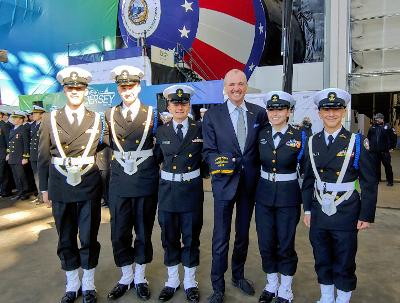 Five cadets from the Marine Academy of Science and Technology (MAST), on Sandy Hook in northern Monmouth County, provided the color guard for the christening of the submarine New Jersey (SSN 796) at the Huntington Ingalls Industries shipbuilding facility in Newport News, Va., on Nov. 13, joining Gov. Phil Murphy and Dr. Susan DiMarco and other officials at the gala ceremony.

Cadets Dylan Agnese of Lincroft, Tessa Campolattaro of Rumson, Jack Arhanic of Fair Haven, Sam Puleio of Tinton Falls, and Brandon Weiss of Oceanport traveled to Newport News on Nov. 11 with CDR Tracie Smith-Yeoman, U.S. Navy (Ret.), the Senior Naval Science Instructor at MAST, and Senior Chief Michael Vaccarella, USN (Ret.), the Naval Science Instructor at MAST, for a final rehearsal of the program on Nov. 12. The cadets returned home following the Nov. 13 ceremony and resumed their school schedule on Nov. 15, according to a press release.

“MAST NJROTC was so honored to be able to be part of the christening,” said Smith-Yeoman. “Despite the high visibility of the event and the numerous high-ranking guests and television cameras, the cadets presented our nation’s honors in a flawless manner.

“The christening is a huge milestone in the life of the submarine and it is part of a long-term relationship the cadets of MAST will have with the crew of the New Jersey.

“We were excited to bring Jersey pride to the shipyard and to our state’s sub and we look forward to the commissioning and to following the New Jersey’s sure-to-be-impressive career as she defends freedom around the world,” said Smith-Yeoman.

“This wasn’t just a local a local or even a statewide event. This was an opportunity to participate in something that is now part of United States naval history,” said MAST Principal Earl Moore, pointing out that the USS New Jersey is one of only about 35 Virginia Class Fast Attack Submarines in the United States.

“A ship is only christened once. That these five cadets were able to be a part of this ceremony means they are part of our nation’s history. We are very grateful to have been invited and our cadets did not disappoint. They did an outstanding job,” Moore said.

Monmouth County Commissioner Lillian G. Burry, who has been a longtime friend, supporter and advocate for MAST, said, “I am not surprised this outstanding color guard of
MAST cadets was selected for this honor.

“They approach every mission with dedication and enthusiasm, whether it is wrapping gifts for the Zilinski Foundation, taking tests, or providing color guards or participants in parades. For them, while it was a distinct honor in which they should take considerable pride, I am sure they treated it with no more attention than they do for everything they are asked,” Burry said.

“The christening is a Navy and shipbuilder tradition that celebrates the demanding work and dedication of the women and men who are building this magnificent submarine, readying her for the next phase of construction, which includes launch, testing, sea trials and delivery to the Navy,” said Jennifer Boykin, president of Newport News Shipbuilding. “We commemorate these American builders during a challenging time in our nation’s history.”

The ceremony was attended by hundreds of workers at the shipbuilding facility, together with their families, many wearing a variety of signs of pride in their work and the companies that employ them in building Navy ships, according to the press release.

“When New Jersey joins the Navy’s fleet, she will deliver firepower for freedom,
taking with her the skill of her shipbuilders, the spirit of her sponsor, the courage
of her commander and crew, and the pride of her fellow New Jerseyans,” Boykin
added. “These characteristics, united, forge a strong national defense that defines
America.”

Dr. Susan DiMarco, of Montclair, a retired dentist and wife of former Secretary of Homeland Security Jeh Johnson, is the ship’s sponsor and performed the traditional honor of breaking a bottle of American sparkling wine across the submarine’s bow during the ceremony, according to the press release.

In addressing the crowd, DiMarco noted, “As citizens today, we are more divided and disconnected from one another than at any time in our last 50 years, but the efforts that went into building New Jersey say otherwise. In order to complete this great ship, there must have been vital partnership and purpose. As a country, we are cooperative, generous and tenacious, and we can work together on exceptional ideas.”

Murphy was among the speakers at the ceremony, praising the numerous persons and products for which the Garden State is famous, from Bruce Springsteen to pizza and bagels.

Retired U.S. Navy Adm. Michael Mullen, former Chairman of the Joint Chiefs of Staff and former Chief of Naval Operations, provided the keynote address, according to the press release.

The company reached the pressure hull complete milestone in February, meaning all the ship’s hull sections were joined to form a single, watertight unit, one of the last major milestones before the christening.

Next it will be floated off to a floating dry dock for final outfitting and testing, expected within the next few weeks. It will take approximately three days and 56 heavy duty
sets of railcar wheels to move the 7,800-ton submarine the 960 feet to the dry
dock.

New Jersey is the 23rd Virginia class submarine and the 11th to be delivered by
Newport News Shipbuilding, and the first submarine designed with a modification
for male and female crew integration. Construction began in March 2016 and is
82% complete. It is scheduled to be delivered to the U.S. Navy in late 2022, according to the press release.