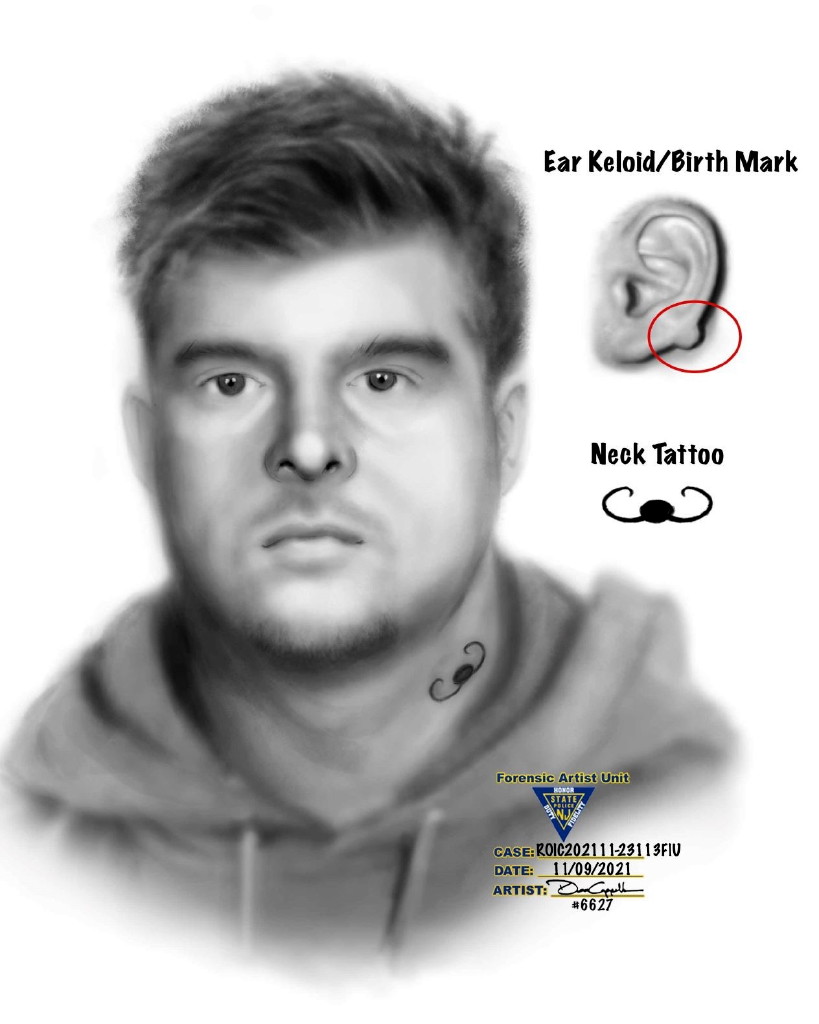 As of Dec. 1, law enforcement agencies were continuing to search for a white adult male who is suspected of committing a physical attack and an attempted sexual assault of a female jogger in a Monmouth County park in Marlboro during the first week in November.

In response to an inquiry from a reporter, Mark Spivey, a public information officer with the Monmouth County Prosecutor’s Office, Freehold Township, said, “this investigation remains ongoing and we continue to urge anyone with information to come forward, and for visitors to the area to be mindful of their surroundings.”

Spivey said that since the prosecutor’s office issued its initial press release regarding the investigation, a sketch artist with the New Jersey State Police has created an enhanced sketch of the suspect which highlights a distinctive physical feature on the suspect’s ear (known as an ear keloid/birth mark) and a distinctive tattoo on the suspect’s neck.

He said the appropriate contact for anyone with information regarding the incident is Monmouth County Prosecutor’s Office Detective Joshua Rios at 1-800-533-7443.

Spivey said anyone who feels the need to remain anonymous, but has information about this or any crime can submit a tip to the Monmouth County Crime Stoppers by calling the confidential telephone tip line at 1-800-671-4400; by downloading and using the free P3 Tips mobile app (available on iOS and Android – https://www.p3tips.com/1182); or by going to the website at www.monmouthcountycrimestoppers.com

The incident in Marlboro took place shortly after 11:45 a.m. Nov. 4, about 100 feet off the Henry Hudson Trail in Big Brook Park, not far from the trail’s eastern terminus at Boundary Road, according to a Nov. 6 press release from the Monmouth County Prosecutor’s Office.

An investigation involving members of the prosecutor’s office Special Victims Bureau and the Marlboro Police Department determined an adult female was running in the area when she noticed a male stretching nearby, according to the press release.

Moments later the man physically attacked the woman, causing her to fall to the ground. He then brandished a knife, which he used to cause minor injuries to her arms.

The man then allegedly exposed himself and attempted to sexually assault the woman, but she managed to fight him off, causing him to flee in an unknown direction, according to the press release.

The suspect is described as being a tanned white adult male with medium length hair,
standing about 6 feet tall and weighing about 240 pounds. He was wearing a
dark-colored hooded sweatshirt and sweatpants. He reportedly had a raised scar (keloid) on one ear, light facial hair and a distinctive neck tattoo.

The suspect is to be considered armed and dangerous, and anyone who believes they have encountered the man is urged not to approach him and to immediately dial 911, according to the press release.