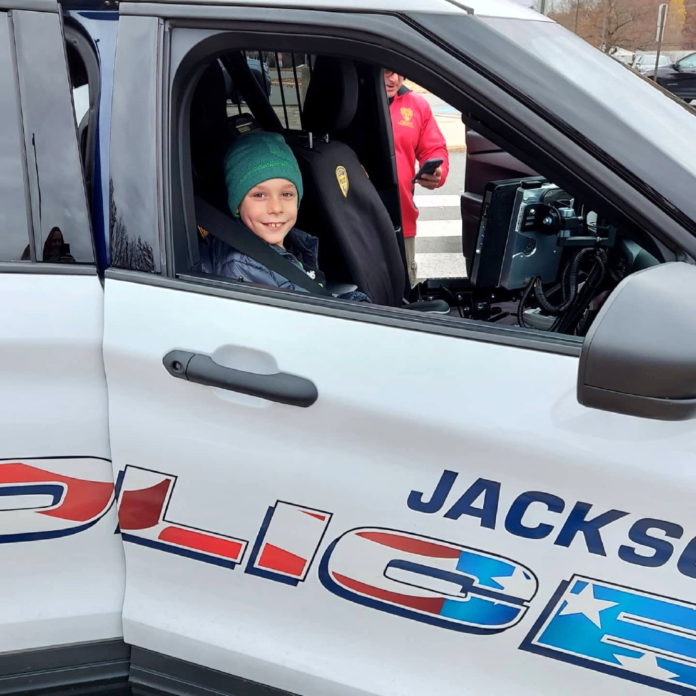 JACKSON – Jake Kulesa, who is 8, was diagnosed with cerebral palsy when he was 13 months old. A nonprofit organization to benefit the youngster was started in October after Jake’s trial run with a hyperbaric chamber.

Hyperbaric oxygen therapy is a medical treatment that supplies pure oxygen into an individual’s bloodstream while he lies in a pressurized chamber. While the individual is in  the chamber, the air pressure is increased three times higher than normal air pressure, making it possible for the person’s lungs to gather more oxygen, according to the Mayo Clinic.

Shannon and Gary were able to obtain a hyperbaric chamber offered by a family friend who was involved in another foundation and whose son had success using it. The friend had an extra hyperbaric chamber available and offered it to the Kulesas to try it for Jake.

After having treatments for several weeks in the hyperbaric chamber, Jake was off pain medication, sleeping better and his physical therapy was going well, according to Shannon.

However, after a few months, the Kulesas had to return the hyperbaric chamber because a boy who was a burn victim needed it.

Within three weeks of not having the hyperbaric chamber, Jake’s muscle spasms started again, he could not complete an hour of physical therapy, and he was not sleeping or speaking well, according to Shannon.

Eventually, Amazing Athletes in Howell, House of Shaves Barbershop in Jackson, and the JAR of Hope Foundation were able to raise $25,000 to get Jake a hyperbaric chamber of his own, according to Shannon.

“Right away I went to PBA Local 168 and asked them for money to donate. We gave $1,000 to help get the air chamber for him,” Grochowski said.

Jake’s dream is to be a police officer and a member of a SWAT team.

“I started talking to Shannon and she was explaining to me how her father used to be (on a SWAT team and taught at the police academy), and that is what Jake’s ambition is for later in life.

“So I said, ‘How about if I organize a chance for him to come out to the Jackson SWAT team and have a good day with it.’ So we came up with a plan to surprise him,” Grochowski said.

On Nov. 30, Jake and his family took part in a training session with the Jackson Special Response Team. Grochowski picked up Jake, Jake’s twin brother, Aiden, and their brother, Kyle, 11, from school and brought them to the police training range.

“Jake is great and so are his brothers. It was a complete surprise for Jake, but his brothers knew we had something planned. I’m silly, so when I drove down the dirt road (to the training area) I did four-wheeling with the police car and they were just giggling up a storm, and I let them use the speakers,” Grochowski said.

He said Jake was “acting like a police officer, sometimes, but then just having fun.”

Shannon said her sons “had the time of their lives. They got to meet the K-9 dog and watched him train. One police officer was in a big heavy duty suit and jumped out of a car pretending to be a bad guy and running, and the dog chased him and took him down. They got to see the flashbangs police throw in front of cars to disorient criminals so they can get them out of the car safely.”

The boys got to hide in a house that had been set up at the training site while the Special Response Team team members cleared each room to find them.

“Jake was really bad at being a bad guy, he giggled and laughed through the entire thing. He was really easy to find. The officers were just so good with them, they really were, the kids had such a great day. They were all over the police car, they got to use (night vision goggles), where if someone walks through the woods you can use these goggles and see where the person stepped because of the heat from their footprint. My kids thought that was just the coolest thing ever,” she said.

She said Jake would not stop talking about the event for two days and she praised the Jackson police as “phenomenal.”

“I guess he was about 3 when he first started saying he wanted to be a police officer … my dad did 30 years (as a police officer) so my dad is a big influence on that, I’m sure,” Kulesa said.

After seeing the supportive response from the community, the Kulesas decided to pay it forward and started the Jake’s Got This Foundation to help the parents of children who have special needs navigate difficult situations.

“We are doing two things; one is to get out the information, and not just to the families with cerebral palsy, but there are a lot of laws and regulations in place that a lot of special needs families have no idea exist. We want to get it out to as many people as possible that there are advocates who will go to your child’s school and fight for them to get the benefits they need,” Kulesa said.

For more information, visit jakesgotthis.org or on Facebook at Jake’s got this and Jake’s Got This Foundation.