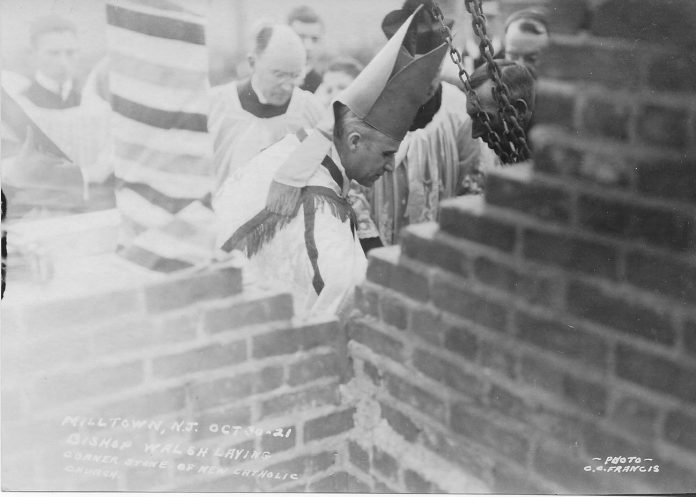 MILLTOWN – As Our Lady of Lourdes Church celebrates 100 years, it owes much of its humble beginnings to the French Catholic workers at the once bustling Michelin Tire Company on Ford Avenue.

“Prior to us being a [Catholic] mission, people [from Milltown, East Brunswick and North Brunswick] went into New Brunswick to St. Johns Church,” said Ann Marie Simons, who serves as the Our Lady of Lourdes Church’s (OLOL) historian.

Since January, Simons has shared the history in weekly excerpts throughout the year on the parish’s website.

In 1907, Milltown saw unprecedented growth with the arrival of the French rubber company.

“The Michelin brought many of their French Catholic workers with them,” Simons said.

In 1912, the Catholic mission in Milltown was created by the Bishop A. McFaul of Trenton and Father Devine from Sacred Heart Parish in New Brunswick, now part of Holy Family.

“Because there was no space to have mass, the Michelin Company was very generous for the use of their buildings,” Simons said.

The first mass was said in the French School House that was located on the property where the Milltown Pharmacy now stands.

As the number of faithful increased, the need for a large space caused the mission to move two more times. The Rev. Joseph A. Ryan at the time was authorized to acquire a site for a church, rectory, school and convent. The church property was purchased from John Van Liew Booream on May 19, 1919.

A campaign began to raise $40,000 for construction. Ryan and the committee sought the assistance of Mr. J. Hauvette-Michelin. He offered one dollar for every dollar raised up to $15,000.

The fund drive was well received by the community including the ministers of the Methodist Church and St. Paul’s German Reform Church. By June 1921, the mission raised $15,000 and church construction began. The men of the future parish were called upon to dig the basement and erect the foundation. Men volunteered their time in the evening after their day’s work.

The owner of the Marguerite Hotel, now the Golden Lion, sent sandwiches and beverages to the workers every night.

“And that was the start of us having a building,” Simons said. “Parishioners came home from work and they laid the foundation. The building was put up in seven months. … I don’t know if you could build a house in seven months.”

One hundred years brings many special anecdotes, including a story of two men working on the foundation who threw coins from their pockets on the right side of the church.

“That is where they wanted to sit, where the money they gave to the church,” Simons said.

On Oct. 21, 1921, the Milltown mission was formally incorporated under the laws of the state. Bishop Thomas Walsh of the Diocese of Trenton, assisted by Ryan, blessed and laid the corner stone on Oct. 30, 1921. Approximately 2,500 people were in attendance, including many dignitaries, and the Michelin Brass Band played at the ceremony.

The corner stone contained copies of the Home News, Sunday Times, Catholic News and Standard-Times of Philadelphia; a silver dollar, and fifty-, twenty-five, ten-, five- and one-cent pieces; the names of dignitaries at the time – President Warren G. Harding, Gov. Edward I. Edwards of New Jersey, Mayor Christian Kuhlthau; the names of those who made donations; as well as all those who contributed in any way to the erection of the church; and a transcript of the history of the parish up to that date.

Walsh spoke and reminded all Catholics in the vicinity of Milltown that they were to attend mass at OLOL, saving them from travel to New Brunswick churches.

Construction on the upper church began and in less than seven months the church was completed.

However, after the Depression, the Michelin Tire Company went back to France and many of the workers followed.

In the 1920s more than 2,000 people worked for Michelin in Milltown in 15 buildings that contained 475,000 square feet of factory floor. But Michelin’s market had a blowout when the economy collapsed, and the company closed its Milltown facility in 1930.

In 2016, many of the vacant factory buildings were demolished.

Simons, along with Bernadette Olson, an OLOL trustee, and the Rev. Ed Czarcinski, sat down with the Sentinel to reminisce about the past and discuss the plans for a yearlong celebration.

Church members kicked off the centennial celebration with a gala held on Oct. 16 at the Pines Manor in Edison.

Olson and her husband moved to Milltown in 1985.

“We both grew up in Hudson County,” she said, noting when they were looking for a house in Middlesex County, part of what appealed to them about Milltown was OLOL. “My name is Bernadette; it was a sign.”

Czarcinski arrived in 1995. He served as an assistant pastor until 2004 and then returned as pastor in 2006.

As the parish grew and grew, the Feast of Our Lady of Mercy saw the opening of the church’s school on Sept. 24, 1942. Four kindergarteners and seven first graders began classes in one of the front rooms of the rectory, today which is the rectory office.

School was held in what was called the Red Schoolhouse before a new building was built to accommodate a growing number of students. On Sept. 4, 1957, the new school building opened to welcome 400 students.

In 2006, the school was saved from closing after a successful fundraising campaign from the parish, school families, alumni and friends. However, the school closed indefinitely in 2013 due to financial reasons associated with declining enrollment.

“Over the years, it’s hardly been unoccupied,” Czarcinski said, noting Milltown and North Brunswick school districts have used the building.

Olson said as part of the centennial celebration, they are in the process of putting together a yearbook-like book, which will incorporate the history and what is going on currently and anything they do over the course of the next year.

In October, Milltown Mayor Trina Mehr presented a proclamation to honor OLOL’s 100 years. The church held its annual Christmas Baazar, which is organized by Olson, on Dec. 4.

The Milltown Historical Society commemorated the church’s 100 years on Dec. 11.

In the New Year, the parish has plans to take a bus pilgrimage to a shrine of Our Lady of Lourdes in Emmitsburg, Maryland. Czarcinski said they would have liked to take a pilgrimage to the shrine in France; however, they are not accepting any visitors because of the coronavirus pandemic.

To round out the year of celebrations, the parish plans for a family picnic in September 2022 and finish with a fun mass and reception with the hopes of Bishop James F. Checchio of the Diocese of Metuchen in attendance on Oct. 30, 2022.