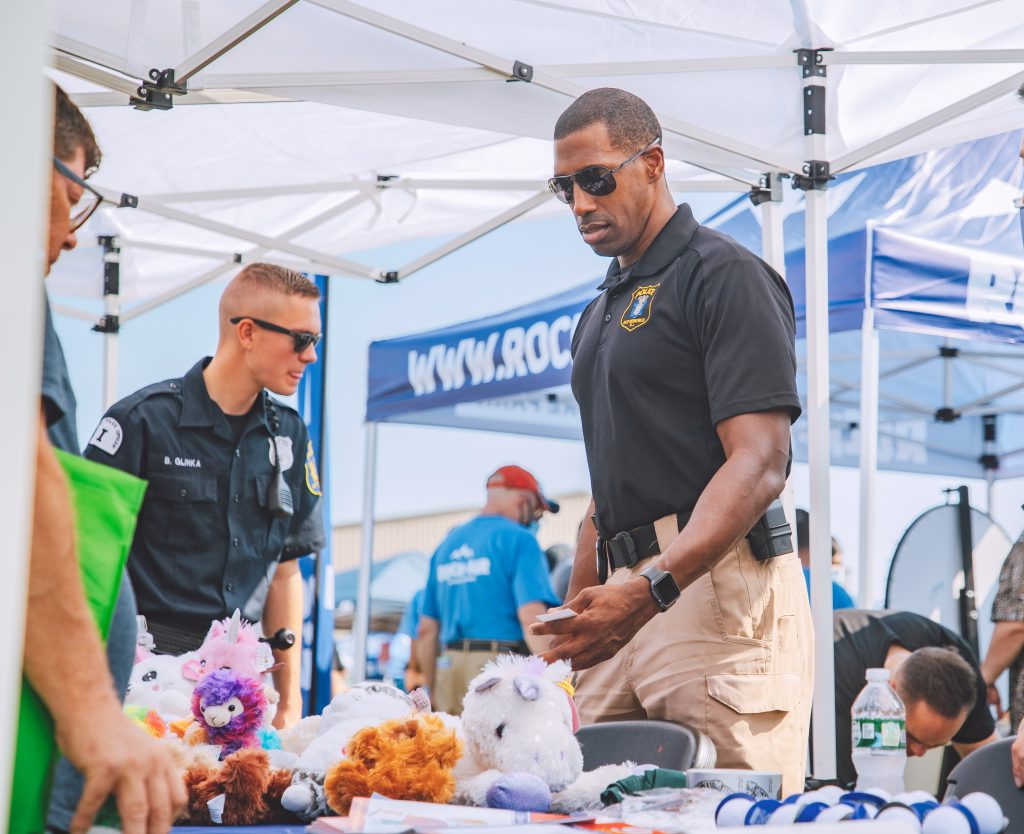 To proactively address the potential pitfalls that the youth of East Brunswick face, Officer Reggie Wright of East Brunswick’s Community Policing Unit serves as an instructor for a K-12 educational program known as L.E.A.D. (Law Enforcement Against Drugs & Violence).

However, before Wright took his oath to serve the public or entered a classroom to teach 600 fifth graders, he played professional basketball in Europe.

Following a successful collegiate career at New Jersey City University, he went overseas to compete in Slovakia and the Czech Republic.

After returning home during the offseason, a respected peer approached Wright with a question regarding his plans after basketball.

At this moment, he hadn’t yet determined or discovered what his role in life would be after athletics. However, as the conversation progressed, the topic of law enforcement was introduced, and a connection was made.

“I came home in the offseason and went to lunch with a friend of mine. He had recently become a State Trooper.

“He said, ‘Hey, what is that you plan to do after you finish playing basketball?’ I said, ‘I’m really not sure.’ But even though he was a peer, I admired him for who he is and how he conducted and carried himself. So, I asked him, ‘Why do you do what you do?’

“He said, ‘I want to be able to have an influence and impact change, especially in the minority community. We don’t really have a high view of law enforcement based on some stuff that’s happened in the past.’

“So, he said, ‘If I want to see a change than maybe I need to become a part of the change.’ That’s where the affections for law enforcement in terms of me getting on the job kind of birthed from,” Wright said.

In 2010, after spending five years with the Washington Township Police Department, Wright became an officer in East Brunswick.

In addition to serving as a patrolman, Wright is also a part of the Community Policing Unit. The unit is tasked with building community relationships by acting as the department’s liaison to the townships’ residents, businesses, schools and visitors.

“Some people are pro-police, some people are indifferent, some people may be weary of the police. I try to get out into the schools, whether it’s high school, the middle school, elementary school, or just different events that we may have.

“I really try to establish a positive rapport and build trust with the community. They get a chance to talk to me, ask me questions and to know a little bit about the man behind the badge,” Wright said.

Through the L.E.A.D. program, Wright says he’s able to make those personal connections by teaching a curriculum that emphasizes character development, self control, decision making, discernment, and accountability.

“The L.E.A.D. program is a character development, socio-emotional learning curriculum. I teach it for fifth graders. I have eight elementary schools and over 600 students.

“For me, the L.E.A.D. curriculum was vital and important because of the character piece. I feel like schools don’t really emphasize that. They emphasize academic achievement.

Currently operating in 40 states, over 3,000 local police officers, educators and prevention specialists have been trained to teach the 10-week program.

The curriculum focuses on deterring students from engaging in harmful conduct and criminal activity, while imparting wisdom on how to develop honorable and positive qualities.

Nick DeMauro, the executive director and CEO of L.E.A.D., explained that in 2014, a group of law enforcement professionals and local leaders met in New Jersey to discuss the deficiencies and disconnect that existed between communities, schools and police departments.

To remedy this problem, DeMauro stated that the group decided to “develop a very comprehensive organization for law enforcement agencies to support local communities.”

“Our entire focus is building relationships between schools and police. … My personal goal is to grow the organization to reach as many children as possible in the United States and beyond.

“I am honored and humbled to serve communities and offer them a solution for addressing drug abuse and violence. No other organization has put the time and resources to serve law enforcement in communities,” DeMauro said.

For Wright, the time and effort spent in the classroom is a worthwhile investment on both a personal and community level.

He vividly recalls how a student choose to dress up as him for Halloween. When Wright asked why he made that decision, the student said it was because, “You had the most impact on my life.”

From a community perspective, Wright believes the domino effect of the program’s lessons will help create functional families and respectable members of society.

“If I’m impacting this boy or girl who one day becomes a husband, a wife, a mom, a dad, or professional in whatever organization they work for … then that can change lives to come,” Wright said.

Although Wright is actively engaged in the community, he made sure to mention that it takes a cooperative village to raise and guide today’s youth.

“It’s a village. It takes all stakeholders to be involved in raising children. It’s not just solely the responsibility of the parents. It starts in the home first and then it branches out.

For more information on the L.E.A.D. program, visit www.leadrugs.org/.