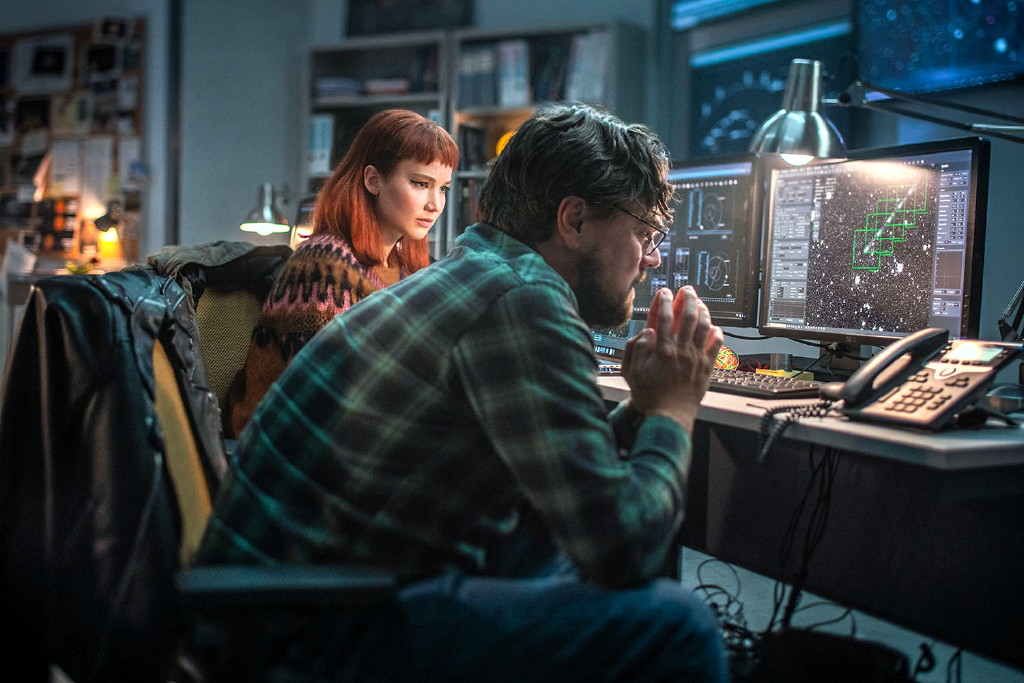 Politics today is a highly divisive environment. The arguments include “listen to us, don’t listen to them,” “we are good, they are bad” and “vote for us, don’t vote for them” — nobody ever compromises. Insert the possible end of the world, via a comet racing for Earth, and you have the backdrop for director Adam McKay’s quick-witted Don’t Look Up, in theaters now and on Netflix Dec. 24.

Kate Dibiasky (Jennifer Lawrence) is monitoring the skies as a grad student when she discovers something new in front her: the aforementioned comet is a planet-killer-sized object. Kate turns to her professor Dr. Randall Mindy (Leonardo DiCaprio) to confirm the calculations that lead both to the same conclusion — the comet is on a collision course for our home.

But discovering the impending disaster is just the beginning and in actuality the easiest part of the equation. To get the government and the population at large to understand and act accordingly is a monumental undertaking and much more difficult than discovering the unthinkable.

Kate and Dr. Mindy aren’t ready for the ride they are about to take. From meeting the uninterested president (Meryl Streep) and her chief of staff son (Jonah Hill) to making the media rounds that include visiting with talk show hosts Brie (Cate Blanchett) and Jack (Tyler Perry), the two are ill-suited to embark on the dizzying race to save the world. Can they step up to the challenge?

McKay (The Big Short, Vice) once again provides laughs that come within smart political discourse. As McKay has proven time and time again, nothing is off limits and while some of the humor present may make you slightly uncomfortable, it all feels ripped from the pages of every media outlet across the country. And it all drives home a simple point: Celebrity is more important than anything else.

Don’t Look Up brings together so many of the most talented actors working in Hollywood. DiCaprio and Lawrence both deliver in their leading roles, grabbing us as viewers to either root for or against their dilemmas. Together they are an unstoppable team who seem destined to change the world.

In their orbit, the uber-talented Streep has a unique role as she elicits smiles and more while viewers like me just wanted to punch Hill (and that’s a good result). Blanchett is the stereotype given to entertainment reporters while Perry seems vastly underused here, but the film was already pushing its outer limits for length.

I really enjoyed every aspect of the film and wanted to immediately rewatch it and there are very few films that fit that standard. The wit, the acting, the story — all were top notch and organized in an engaging and fun manner. It is one of my favorite films of 2021 and McKay remains able to hit the right buttons at every turn.

Is celebrity more important than life? For some there is no question that is the case. But whether you look up or not, we should still listen to each other. We might hear something that we can use to thrive by taking a little more time exposing ourselves to differing opinions.