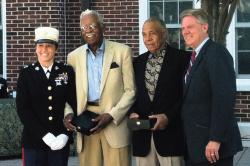 METUCHEN – The borough saw the passing of two significant members of the community in December.

Perrino was a lifelong resident of Metuchen. He was 102.

“I was privileged to spend some time with Chief Perrino during the last few years and in my conversations with him, I was struck by his devotion and love for the borough and for our nation,” Mayor Jonathan Busch wrote in a social media post.

“Chief Perrino was also an artist. His paintings adorn the walls of his home and, in fact, Chief Perrino painted the now-famous portrait of our borough namesake, Chief Metuchen, in 1965, which hangs in the office of Metuchen’s current police chief. A couple of years ago, Chief Perrino showed me a photograph of an apparent life sketch of Chief Metuchen from 1693 which inspired the painting.”

Perrino was born on July 8, 1919, in Metuchen to Vincent Sr. and Carmela Perrino. He began his life of service and valor when he became an active member of the U.S. Army and served during World War II.

While stationed in Guam in 1944, Perrino was shot by a Japanese sniper during his rescue of an injured soldier and spent 15 months recovering in various military hospitals. While injured, Perrino was able to save the lives of fellow soldiers, a platoon sergeant and a first class private, Busch had said when Perrino was awarded a proclamation for his service and celebrated his 100 years in 2019.

Perrino was awarded the Bronze Star, the fourth highest award military personnel can receive for an act of bravery and heroism, and the Purple Heart, which is given to anyone who has been wounded or killed in the line of service.

After his military service, Perrino was appointed to the Metuchen police force in 1946, and after being promoted over the years to the ranks of sergeant in 1953 and captain in 1965, he served as chief from 1976-85.

While on the police department, Perrino graduated from the FBI National Academy in Quantico, Virginia.

Perrino was a lifelong communicant of St. Francis of Assisi Cathedral in Metuchen, where he was an usher for 65 years and was a former member of the Italian American Club of Metuchen.

He was predeceased by his wife of 65 years, Theresa (Wagenhoffer) and siblings Francis, Anthony, Vincent Jr., Elizabeth and Marie. He is survived by his son Joseph Perrino Jr. of Milltown; two daughters, Janet Brown and her husband David of Olney, of Maryland, and Loretta Perrino of Florida; four grandchildren, Juliana, Daniel, Nicholas and Priscilla; and eight great grandchildren, according to his obituary.

Banks’ life was celebrated at the American Legion Hall in Metuchen on Dec. 29. He was 98.

In 2012, Austin F. Banks and Daniel E. Robinson, who happened to be neighbors in the borough at the time, were each presented with the Congressional Gold Medal, the nation’s highest civilian honor, for their service with the Montford Point Marines during World War II, during an outdoor ceremony in front of Borough Hall.

The ceremony in Metuchen was jointly hosted by the borough and the U.S. Marine Corps 6th Motor Transport Battalion, based in Red Bank. Congressman Frank Pallone (D-6) presented the medals to the former Marines.

At the ceremony, Banks said all he could say was thank you to the U.S. Congress for recognizing the Montford Point Marines.

According to the U.S. Marine Corps website, in 1942, President Franklin D. Roosevelt established a presidential directive giving African Americans the opportunity to be recruited into the Marine Corps. The United States had built a segregated basic-training camp at Montford Point — a satellite facility of Camp Lejeune, North Carolina.

After his service, he attended Howard University in Washington, D.C., on the G.I. Bill and later Rutgers University, where he studied management.

Banks had an impact on many in the borough where he lived with his wife Marion. He was a longtime member of the Centenary United Methodist Church. A post on the church’s social media page wrote “Austin’s impact on Centenary, and on the entire Metuchen community, knew no bounds.”

In 2013, Banks, along with Robinson, were honored with the MLK Outstanding Citizen of the Year award through the Metuchen Area Chamber of Commerce. Robinson had passed away before the award ceremony that year. His son, Daniel Robinson, IV, accepted the award for his father.

The chamber posted on its social media page “[Banks] will be well remembered by so many and his memory is indeed a blessing.”

In 2016, Banks served as the grand marshal of the Metuchen Memorial Day Parade.

1 of 4
Share
Facebook
Twitter
Email
Print
Previous articleNew Jersey’s minimum wage has increased to $13 per hour for most employees
Next articleLawrence schools on remote instruction Jan. 3-7