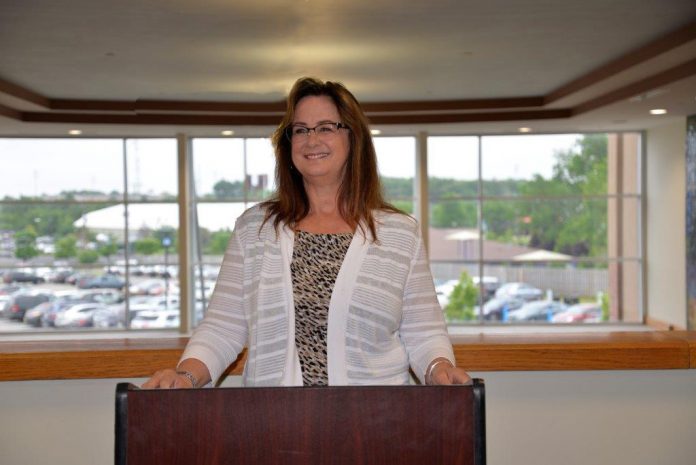 WOODBRIDGE – For those who knew Nancy Bader-Drumm, who was set to be sworn in to her third term as councilwoman for Ward 1 on Jan. 4, it was hard to miss her infectious smile.

As social media posts trickled in with the news of Bader-Drumm’s passing on Jan. 2, many were left with a loss of words as they posted photos of Bader-Drumm with her hard-to-miss smile.

Bader-Drumm, who battled a nine-month “courageous fight” with cancer, passed away at her home with her family by her side. She was 62.

“She was an amazingly positive person who lit up the room wherever she was,” Mayor John E. McCormac said. “She never spoke ill of anyone and nobody ever spoke bad about her. It was simply impossible to be sad or mad if you were around Nancy Drumm.”

McCormac added “Nancy was in politics, but she was not a politician.”

“Nancy was purely a public servant who thoroughly enjoyed her time on the council because she was able to help people which was her passion,” he said.

New Jersey Assembly Speaker Craig J. Coughlin (D-Middlesex), whose hometown is Woodbridge, said Bader-Drumm’s legacy will live on through all those she impacted.

“She was a strong, kind, and compassionate woman who cared deeply for her neighbors and took great pride in serving the people of Woodbridge Township,” he said, calling her a “truly positive force in our local community.

“From the promotion of local businesses to environmental sustainability, community arts and animal welfare, Nancy’s work on the council was central in turning the community-centric, quality of life vision for Woodbridge into a reality.”

“She really cared for people’s concerns, no matter how small,” he said.

Bader-Drumm was born in Perth Amboy on Feb. 22, 1959, to Thomas Bader and Sophie Dobos Bader and was a lifelong resident of Woodbridge. She was a 1977 graduate of Woodbridge High School.

She had been serving as Ward 1 councilwoman since 2013 and was re-elected to a third term in November.

She also served as membership director for the Woodbridge Metropolitan Chamber of Commerce for 10 years.

She is survived by her husband of 33 years, Hugh P. Drumm III; children, Lauren Drumm and her husband, Braden Bish, of Bordentown, and Patrick Drumm and his wife, Katherine, of Holmdel; mother, Sophie Dobos Bader of Woodbridge; brothers, Thomas Bader of Midlothian, Virginia, and Brian Bader of Howell; and grandchildren, Sophia Drumm and Hugh Drumm V.

Visitation for family and friends will be from 2-8 p.m. Jan. 5 at Costello-Greiner Funeral Home, 44 Green St., Woodbridge.

A Mass will be celebrated at 10:30 a.m. on Jan. 6 at Saint James Catholic Church, Woodbridge.