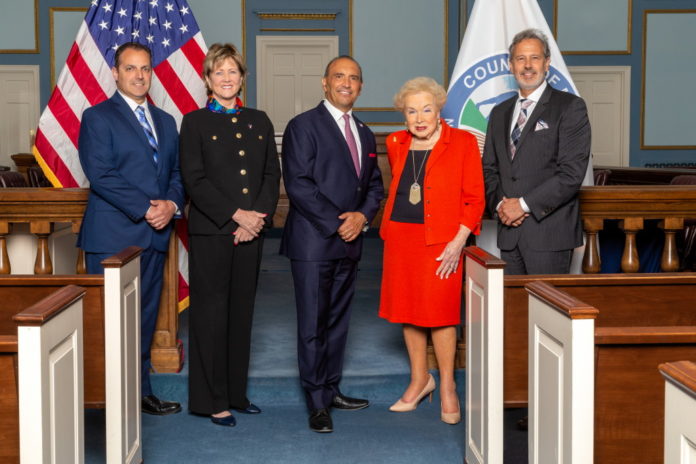 “I would like to thank the board for appointing me to serve as director in 2022,” Arnone was quoted as saying in a press release from the county.

“Today is a great day because I sit with four colleagues who are dedicated and committed to not just their departments, but to all departments in Monmouth County and this is why we come out so strong.

“In this upcoming year, I plan on continuing the great work we did in 2021 and I am so proud of the tough decisions we made which puts us head and shoulders above other counties. This is going to be a great year ahead in Monmouth County,” Arnone said.

“I want to thank sincerely all the Monmouth County voters for allowing me to have a second term as a commissioner, a job I truly love. And thank you to Director Arnone and my fellow commissioners for having faith in me to be deputy director again this year,” said Kiley.

“Throughout 2021, our employees worked tirelessly and they stepped up, took on new tasks and even risked their lives to help our residents. We would not be able to have accomplished what we did without them,” she said.

Prior to the selection of the board leadership, Monmouth County Surrogate Maureen Raisch and Kiley were sworn in to office by state Superior Court Judge Joseph W. Oxley.

“I am excited to be standing here as the Monmouth County surrogate and I am so honored to be following in the footsteps of Rosemarie Peters, whom I consider a friend and mentor,” said Raisch. “My immediate goal is to continue to improve the systems and processes to help those who need us.”

According to the Monmouth County website, the surrogate “has the authority to qualify executors and trustees named in wills, to appoint administrators for those who die without wills, and to appoint guardians for minors and legally incapacitated persons.

“The surrogate’s office is also responsible for overseeing the procedure in contested estate matters, in the declaration of incapacitation, in appointment of guardians, and in the granting of adoptions in Superior Court,” among other duties.

The county commissioners presented their annual reports for 2021 and their goals for 2022.

“One of my lifelong interests is American history and the role our military has played in it. Monmouth County has had a significant role in it from the beginning with the Battle of Monmouth,” said Commissioner Lillian G. Burry.

“I have been involved and it remains my ongoing privilege, with projects such as Naval Weapons Station Earle, Fort Monmouth and Solider On to restore, preserve and create resources for Monmouth County’s military heritage and to our veterans,” Burry said.

“It is an honor and a privilege to begin my third year as a member of the Monmouth County Board of County Commissioners,” said Commissioner Nick DiRocco. “I want to thank the residents of our great county for the opportunity to serve and I promise that once again this year I will work hard, along with my colleagues on the board, to promote and effectuate all of the values we hold dear in Monmouth County.”

“My first year as a commissioner has been learning a different form of government and I have been fortunate to be assigned some really phenomenal departments and some great directors who I have sat down with to give me guidance on how their departments run,” said Commissioner Ross F. Licitra. “It is truly an honor to serve as commissioner in Monmouth County.”