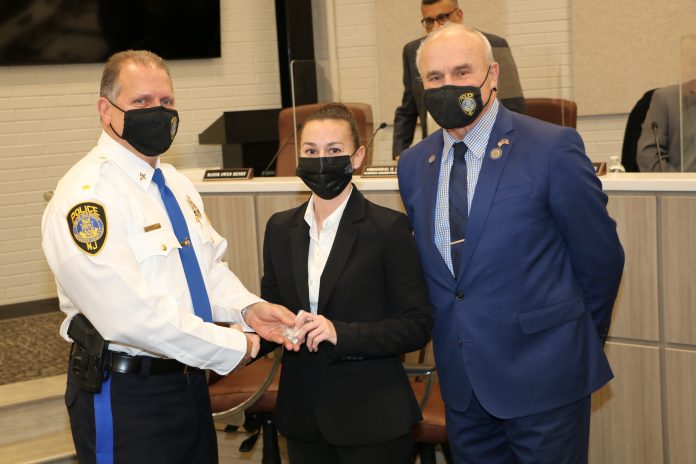 “These officers served the Old Bridge Police Department for a number of years,” Mayor Owen Henry said. “During their times of service, each received numerous letters of appreciation [not only from] residents in our community, but also residents from other communities.”

In April 2020, Higgins was transferred to the traffic and safety bureau as supervisor. He was appointed to acting lieutenant on July 31, 2021.

With the promotion as lieutenant, he will return to the patrol bureau.

Matikonis began his career with the department in 2000. In August 2017, he was assigned to the detective bureau where he remained until his appointment to acting sergeant on July 1, 2021.

With the promotion as sergeant, he will return to the patrol bureau.

The two promotions follow the retirement of longtime police Lt. Blaine Davis, who served the community for 36 years. He began his career in August 1985 as a patrolman. He was promoted to sergeant in September 2002. He remained in patrol as a patrol supervisor until his promotion to lieutenant in October 2011.

Sara Selvaggio was sworn in before the Township Council meeting on Jan. 11. The department now has six female officers.

Selvaggio attended Monmouth University and Brookdale Community College. She previously was employed as an accounts clerk for the Monroe Township Police Department for several years.

“She comes highly recommended from the Township of Monroe,” Mayor Owen Henry said. “Sara took the written test, scored very well and she took the physical test and she did better than some of the men.”

Donavan is a recent graduate of the Camden County Police Academy. He earned a bachelor’s degree in criminal justice from Rutgers University.

Serpico earned a bachelor’s degree in criminology from the College of New Jersey.

Donavan will begin with the department shortly while the other new hires will attend the police academy through June.

The new hires bring the department up to 104 sworn full-time officers.