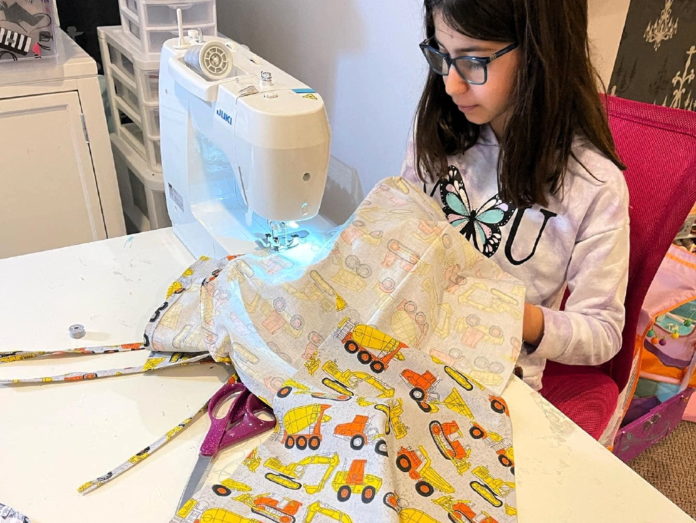 A young resident of Freehold Township is inspiring children who are battling pediatric cancer by designing and sewing custom-made gowns for them to wear.

Giuliana Demma, 11, is the founder of G’s Giving Gowns. Having learned to sew at a local fashion camp in 2020 and receiving a sewing machine for her 10th birthday, Giuliana said she creates the gowns with bright and colorful fabrics.

Giuliana received inspiration in 2021 from her cousin, who was diagnosed with pediatric cancer at the age of 10 months and spent nine months undergoing treatment after surgery. She said her family ordered Disney-themed hospital gowns for her cousin to wear, which she described as “bright and cheerful.”

“I decided that since I learned to sew on my own, I would create gowns for other young, brave children and donate them,” Giuliana said.

Requests for the gowns are often received through social media and on Giuliana’s website. Giuliana said she looks for fabrics that have prints with superheroes, princesses, flowers, butterflies, unicorns and other similar patterns.

“When I get a request for a gown through my website or through social media, I ask for the child’s size and mailing address and look for a cheerful bright pattern fabric I think they would love and would make them smile,” she said. “Sometimes, kids request specific themes, such as Disney characters or a certain color, and then I find that kind of fabric.”

In addition to individual requests, Giuliana has received requests for her gowns from the Liv Like a Unicorn Foundation, A Moment of Magic Foundation, Roar Philanthropy and Children’s Health at K. Hovnanian Children’s Hospital. Most recently, she was making gowns for RWJBarnabas Health.

“When I get a request from a foundation, I choose a bunch of different types of fabrics, like superheroes, farm animals, princesses, dinosaurs, trucks, flowers, butterflies and unicorns, and I make all different sizes,” she said.

To date, Giuliana has sewn about 130 gowns which have been sent to children in New Jersey, New York, North Carolina, Wisconsin, North Dakota, Florida, Mississippi, California and Canada.

The fabric is purchased by Giuliana with money donated from her community and from family members and friends. She also received fabric that was donated by a Girl Scout troop in Old Bridge.

“When I have the fabric, I cut it with a pattern for size and then I sew the gowns,” Giuliana said. “Once I have a lot of gowns sewn, I contact ImageFirst and drop off the gowns to them. They donate their services to me and clean, package and seal the gowns. Then I either mail the gowns or drop them off.”

Giuliana said she always includes a note to the children who are receiving the gowns she has sewn.

As Giuliana teaches her friends to sew so they can help with the gowns, her parents, Vanessa and Joseph Demma, also support their daughter’s project.

“We are very proud of Giuliana for dedicating so much time and passion to this project,” Vanessa and Joseph said. “We are grateful for the help our wonderful community of Freehold and beyond has given her by donating fabric and supporting her mission.

“We believe the kindness she spreads is contagious and when people hear about her project they want to help in any way they can.

“We are overwhelmed with emotion when we hear the stories about the children who are fighting for their lives battling cancer. The passion Giuliana has for helping others is inspiring and we hope she always continues spreading light to those fighting cancer,” Vaness and Joseph said.

Spreading light to people who are fighting cancer is what Giuliana hopes to achieve with G’s Giving Gowns.

“I want them to know there is a community of people they never met who are thinking of them and showing them support,” she said.