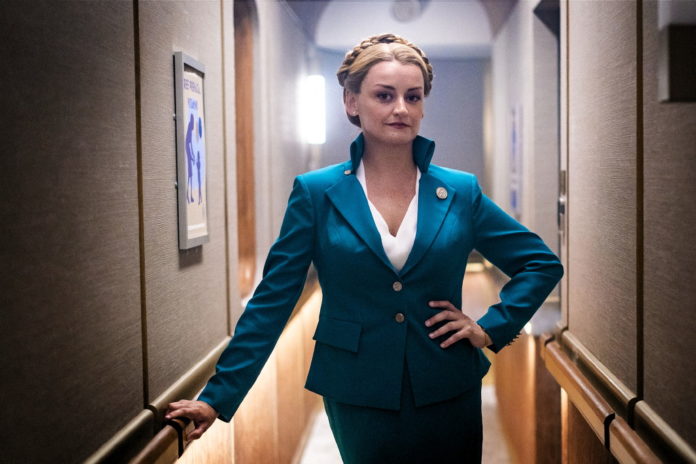 When we last left the divided group, Layton (Daveed Diggs) and Ruth (Alison Wright) plotted to take back Snowpiercer from the unhinged and sadistic Mr. Wilford (Sean Bean). Melanie (Jennifer Connelly) made it back to the research station after the train passed her by on her scheduled pickup, but it appears she didn’t survive the elongated isolation. Layton and Alex (Rowan Blanchard) are now on the 10-car pirate train, while Ruth got stuck with Wilford, leaving us very, very concerned.

Here, we catch up with Wright to get insights into her character’s predicament.

In Season 3, where do we pick up with Ruth?
Alison Wright: Well, we pick up with a little bit of a time jump when we begin Season 3, and we’ll see the new world that she’s existing in. Of course, she’s stuck on the train that she does not want to be on with her frenemy, Kevin, who she electrocuted with a cattle prod, and Mr. Wilford, who she has completely betrayed. And because, well, she knows everybody else is on that pirate train, when we start we find her a few months down the line, and we’ll see her existing as best she can and trying to stay hidden from Mr. Wilford.

What do you think would be her smartest move when it comes to surviving this?
We don’t really know the world that we’re going to find them in for Season 3. All we know is that the trains have split and that one train is, so far, it looks good that they’re going to manage to find Melanie and hopefully life.

And we don’t really know what the situation is going to be on the main train Snowpiercer. I think that it would be hard to imagine Ruth would be able to snuggle back up to Mr. Wilford at this point, but you never know. I think she’s been pretty seriously disillusioned by him and very disappointed by him not being the hero that she thought he was. So I can’t imagine she would be able to, but maybe she’ll be forced to stay in his good graces. We shall have to see.

Ruth’s journey has been so fascinating. She was a bit underrated at the beginning of the show, but so much has changed. How excited were you for this transition?
I loved her from the beginning. … I think it’s been an incredible journey that they were able to use Ruth’s character to show the devotion to Mr. Wilford and the love for Mr. Wilford and the belief that Mr. Wilford was this good person — he saved humanity. She was full of blind faith and did anything that was asked of her without really thinking about it too hard.

And then it’s kind of amazing that she got to meet this man who she thought was all these wonderful things and find out that he wasn’t and how wrong she’d been. He is not the person that she dedicated her life to. It’s shocking for her to try and fathom that and figure that out and what to do now when the curtain is pulled back and you realize the person you dedicated everything to is a monster. And realize that this is not a man she can align herself with anymore, and then she’s sort of alone and what does that mean?

She has to pick a side and try and stay in good graces. Try and keep her position by not being demoted to working in third class or something. She doesn’t necessarily have people she can really rely on to help her, because she’s done a lot of bad things in the name of her job. And to see her realize that, that she’s done all these terrible things and to deal with that and to realize that it was all a facade the reason that she was doing it. It’s a lot to work with.