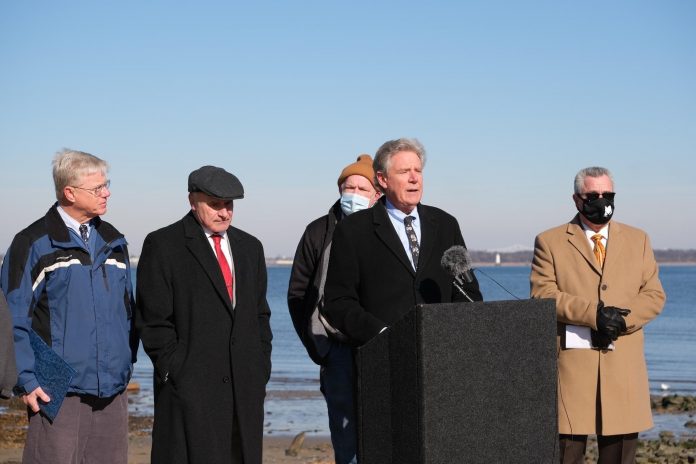 That is when Joseph Seebode, deputy district engineer and chief of programs and project management for the New York District of the U.S. Army Corps of Engineers, said they could essentially “start moving rocks.”

Pallone highlighted a number of projects through the Bipartisan Infrastructure Investment and Jobs Act, which the U.S. House of Representatives and U.S. Senate passed and President Joe Biden signed into law in November 2021.

“The infrastructure bill specifically authorizes $30 million … to rebuild the eastern stone rock jetty, which has subsided and unraveled after well over 100 years of service,” Seebode said, adding the project is 100% federally funded. “The jetty needs reconstruction because it is now mostly under water at high tide allowing sand to migrate and collect in the Cheesequake Creek navigation channel. This has seriously hurt vessels using the channel. We will be moving forward shortly with survey and assessment activities followed by engineering design work permitting and construction.”

New Jersey will receive nearly $1 billion in funding from the Bipartisan Infrastructure Investment and Jobs Act and the Disaster Relief Supplemental Appropriations Act, which was signed into law in September 2021.

New Jersey’s 6th Congressional District will receive $197.4 million in new funding. The infrastructure investments will protect coastal communities from flooding and the impacts of the growing climate crisis while strengthening the economy and creating good-paying jobs.

“This funding is also a major investment in our tourism industry,” Pallone said. “It will ensure our rivers remain safe and navigable for boaters to enjoy and that our beautiful beaches can continue to attract visitors.”

Included in the bipartisan infrastructure bill is $128 million for the initiation and completion of the flood control project in Highlands, which was one of the areas devastated by Superstorm Sandy in 2012, and $5.5 million for dredging and surveying of the Raritan Bay.

Rios said the reconstruction of the eastern jetty is the next logical step to ensure public access to the vital waterway.

“Reconstructing the jetty will help protect the shoreline from erosion while further rejuvenating and preserving this area of the bay and waterfront for generations to come,” he said.

Rios said they are appreciative of the support of Pallone and his team for every phase of making environmental improvements to the area “from contaminated areas of the park designated as part of the Raritan Bay Stag Superfund site to securing $4 million in federal funding from U.S. Army Corps of Engineers for dredging of Cheesequake Creek to [the announcement of] $30 million in federal funding of the reconstruction of jetty.”

He added securing funding for the dredging and surveying of Raritan River will help reduce the risk and impact of catastrophic flooding due to climate change while also improving the overall quality of the water for fish and other wildlife.

In 2020, the Cheesequake Creek inlet had to be dredged because it was shoaling due to the crumbling jetty, Pallone said.

“When you have storms hit against the jetty, it causes not only more crumbling, but more shoaling of the sand into the inlet,” Pallone said. “Eventually … it has to be dredged again.”

In addition to funds from the bipartisan infrastructure bill, funding from the federal Disaster Loan program provides movement of ongoing projects along the Bayshore on Monmouth and Middlesex counties.

This includes $3.2 million to reevaluate flood control projects that have been in place for more than 70 years in Laurence Harbor, East Keansburg and Keansburg, Pallone said.

“We have been writing letters to get anybody’s attention and to bring this situation to anybody’s plate that can help us,” she said. “We are very excited we finally got the right connection with Congressman Pallone and his office. This has been a long time coming and we can’t wait for it to get started and to get these boaters out into Raritan Bay where they belong.”

Reni, of Raritan Marina, said as marinas that have been struggling at the creek, they are “very excited at the opportunity a couple years down the road.”

“We are going to be able to really flourish on this creek again,” he said.

Cheesequake Creek, a shallow-draft recreational channel, serves as an inlet from the Raritan Bay near the south end of Staten Island, New York, behind South Amboy for hundreds of recreational vessels that use the five public marinas on the creek.

In recent years, sediment deposition in the creek has dramatically increased, impacting navigation, safety and overall usage of the channel. The problem was exacerbated by Superstorm Sandy, resulting in large amounts of sediment being deposited in the waterway and further impacting its depth, according to officials.

The last maintenance dredging of the Cheesequake Creek was performed in 1989 by the State of New Jersey, but no further maintenance has been performed in the last three decades. The Army Corps estimates that there are currently between 6,000 and 6,500 cubic yards of sediment required to be dredged to meet that authorized depth, according to officials.

Seebode said the historic Infrastructure and Disaster Relief acts include over $22 billion for Army Corps of Engineers projects nationwide.

“Astoundingly, nearly $200 million of that amount is identified for projects here on the Bayshore and on the Atlantic Coast in Middlesex and Monmouth counties,” he said. “Funding will allow for coastal storm risk management projects to proceed as well as navigation projects.”

Seebode said they look forward to working and collaborating with partners and key stakeholders.

“We have a lot to do, but all of the work before us is exciting and the corps of engineers is ready to get at it,” he said.