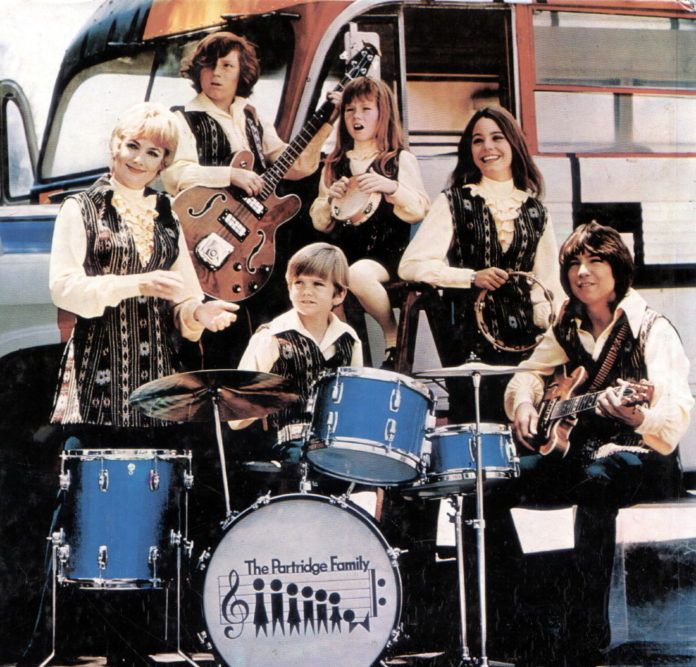 How The Partridge Family Came To Rule 1972.
By Johnny Ray Miller, ReMIND Magazine

If you could sum up pop culture in 1972 in one image, it would be the sunny faces of the Partridge Family smiling out from their Day-Glo bus. Ironically, the fake band featured in the hit ABC television series had far more recording success than many real bands that hit the music scene at the same time.

The Partridge Family came to dominate pop culture on both television and radio. In 1972, David Cassidy became the highest-paid live entertainer on the planet, with the highest likability rating on television, and Shirley Jones reigned as America’s grooviest TV mom.

Jones was looking to rev down her film career to spend more time with her kids, so she turned her attention to TV. After rejecting the role of Carol Brady on The Brady Bunch (it went to her friend Florence Henderson), she was the producers’ dream choice for Shirley Partridge in the ABC musical sitcom The Partridge Family. In December 1969, she arrived on the set at Columbia Ranch to shoot the pilot.

The show, loosely based on the group the Cowsills and The Sound of Music‘s Trapp Family Singers, was quickly picked up by ABC, debuting on Sept. 25, 1970. Soon Jones became America’s No. 1 TV mom, driving a freshly painted 1955 school bus from town to town with her five children, performing concerts.

While Jones was a highly desired commodity on the big screen, David Cassidy was a mere unknown. Behind the scenes, they were actually mom and stepson, but other than securing David a manager, Jones and first husband Jack Cassidy had little hand in David’s success. David had some great acting chops, not to mention charisma, good looks and an incredible singing voice. The teen-zine honchos were already taking notice, running his picture in the magazines after spotting him in several TV guest appearances shortly before The Partridge Family debuted.

From late 1969 to early 1970, Cassidy appeared on a half dozen popular television shows including Bonanza; Medical Center; Marcus Welby, M.D.; The Mod Squad; Adam-12; and The Survivors. The roles were all dramatic in nature. Cassidy took a beat when he was first offered The Partridge Family, afraid that comedy, and the wholesome simplicity of the show, would take his career in the wrong direction. But his trusted manager, Ruth Aarons, felt strongly it was the best move, so Cassidy hesitantly signed on.

It certainly changed the direction of Cassidy’s career, not just as an actor, but in his pursuit of music as well. Cassidy did not sing at the audition (nor was he looking for a singing opportunity), but he was later asked to audition his vocals when prominent record producer Wes Farrell came onboard as the Partridges’ music producer. Farrell knew what he had in terms of a teen idol if Cassidy could actually sing, so they convened in the music studio, and the rest, as they say, is history.

When filming began for the show, the original vision focused more on Jones because of her experience and star power. But when Cassidy proved to be a singer, the dynamic of the show and the music changed. Always the professional, Jones was thrilled her stepson could have the opportunity as the family’s lead singer and supported him with great enthusiasm.

For musical numbers, The Partridge Family had the greatest songwriters in the business. Bobby Hart (the Monkees), Cashman & West (Jim Croce), and Mike Appel & Jim Cretecos (Bruce Springsteen) all contributed tunes. In 1971, Jones and Cassidy appeared at the Grammy Awards for the Partridge Family as a nominee for Best New Artist.

In addition to the great music on The Partridge Family, Executive Producer Bob Claver wanted a smart show, with stories occasionally focused on social issues including the near extinction of whales, racial injustices and religion. The 1971 Christmas episode became the cast’s favorite, in which the Partridge bus breaks down in a ghost town on Christmas Eve. Episodes showcased top-notch guest stars including Jodie Foster, Louis Gossett Jr., Dean Jagger, Arte Johnson, Howard Cosell, Johnny Bench and an unknown Farrah Fawcett.

The show ran from 1970 to 1974 and held a respectable place in the Nielsen ratings, but it was the Billboard charts where the Partridge Family peaked. “I Think I Love You,” the group’s first single released in August 1970 before the show’s premiere, initially failed to get airplay. It finally took off at a small Iowa radio station that began playing the record. Meanwhile, Cassidy and Jones were out on publicity junkets, traveling from town to town promoting the new music designed to match the show’s image, and Bell Records even designed a duplicate tour bus used strictly for promotion.

After the show premiered, “I Think I Love You” zoomed to No. 1 on Nov. 20, 1970 — nine episodes into the series. It won the National Association of Recording Merchandisers award for the bestselling single of 1970 (beating out the Beatles’ “Let It Be”). It was truly an overnight sensation, and none of the cast was ready for it.

Jones took the lead as mother both on set and behind the scenes. She sat all the young actors down one day and gave them a lesson on the importance of sticking together and supporting each other much like a real family, teaching them show business survival skills in true, old Hollywood style.

Young Danny Bonaduce, troubled by real-life family issues, latched on to his TV family with force. Jones and Cassidy grew close during these years, not just as family but as friends who could talk and confide in one another. Susan Dey became a real sister figure for Cassidy, who needed someone to ground him during the week after rigorous weekends of nonstop touring.

Groupies and teenyboppers chased Cassidy with relentless fervor. In 1972, his fan club grew to the largest in history, surpassing those of both the Beatles and Elvis. The phenomenon known as Cassidymania was selling out concerts around the world, but it eventually became too much for David when a young girl died at his 1974 concert at White City Stadium in London.

The Partridge Family ruled the airwaves for four solid years, releasing eight studio albums and two compilation albums for Bell Records between 1970-74. It’s been 50 years since the Partridge Family dominated the world, and fans are still loving it.

3,529FansLike
4,429FollowersFollow
Sign up for our newsletter
Special Sections