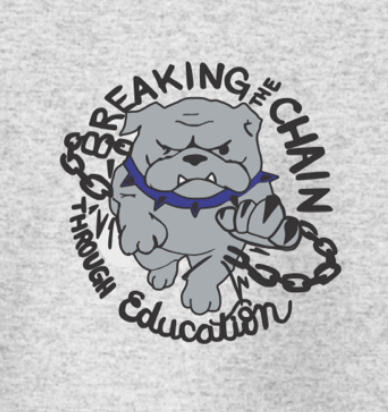 METUCHEN – The ability to sponsor a victim of child trafficking in Ghana has taken on “a whole new level” for Metuchen High School students in their efforts to raise funds for Breaking the Chain Through Education, a non-profit charitable organization dedicated to ending child slavery in Africa.

“It’s just a completely different experience from throwing money at a cause to giving money and seeing the direct effect of that money,” said Grace Regan, a senior at the high school.

Regan, 18, who has been with the club since freshman year, is currently sponsoring a woman who is 20 years old.

“We’re so close in age, yet she has a child and has this whole different life than me,” she said.

Sponsoring a child is just one of the many new fundraising efforts that has essentially kept the Breaking the Chain Through Education (BTCTE) club alive through the pandemic.

“We have about seven student sponsors,” said Senior Sophie Lunt, who has been with the club since freshman year. “Honestly, it’s really cool. The child I’m sponsoring, I was able to call her and talk to her on the phone at one of our meetings because Mr. [Evan] Robbins is always talking to them. We were just talking about school, how different it is for us, me here and her across the ocean. It was insane to actually speak to her.”

Senior Matt Pichalski, who joined the club this year when he heard about the sponsorship program, said he is sponsoring a boy for $30 a month for food and items.

“He sends me videos of his gratitude and it’s heartwarming,” he said. “You can see the effects on the kids.”

Regan, Lunt and Pichalski, who serve on the Public Relations Committee for the club, came together to discuss the sponsoring a child program along with the many events the club has been working on.

The BTCTE club is one of the largest clubs at Metuchen High School (MHS), making up 10% of the student body.

On any given Tuesday afternoon, some 70-80 students filter through the high school’s library where the BTCTE club meets afterschool.

The participation coming out of the pandemic is exciting for Robbins.

“It’s been really fun this year … especially after last year, it was so hard,” he said, noting the club has a consistent 50-60 students and a rotating 30 students, all depending on student schedules and sport seasons.

“Last year the only purpose was to keep [the club] going so we had something this year.”

Regan said throughout the pandemic they continued to meet virtually with a maximum of about 10 students.

“Just us being able to come out of pandemic and get this much participation has really been exciting for all the possibilities,” she said. “We were able to create the Merchandise Committee and do so much more with the involvement.”

The club’s dance benefit is one of the organization’s biggest student-run fundraisers. It’s set to make a comeback at 6 p.m. on Feb. 11 for its 10th year at the MHS auditorium.

“It’s definitely interactive with the community and we raised a couple thousand dollars two years ago,” she said.

“We had a bunch of our sweatshirts in storage and kind of revitalized and found new ways to sell them,” Lunt said, noting setting up the merchandise in the lobby before school has been successful. “We made almost $1,000.”

Student Jaya Rao, who is in the club, helped them design a new logo for a new sweatshirt.

“We wanted to draw a logo that incorporated the school and the organization,” Lunt said. “The logo is a bulldog breaking through a chain for education. The bulldog is our mascot and it’s something that people will buy. We hope this will bring in as much as the merchandise sales have been bringing in especially since those sales have been stuff that has been sitting in our closet for years.”

Members in the committee are planning a dinner at an African restaurant for club students to get engaged with the African culture with the food they eat.

“It’s a way we can connect with the kids we care for on a new level,” Lunt said.

Club members organized a world game day for students at Campbell Elementary School. This year’s event was held in October at the elementary school. Participants paid $10 for the event.

Members in the committee had a movie night scheduled for Feb. 4.

In October, the club held its fourth annual Sam Liss Memorial 5K Run/Walk, which involves a lot of student volunteers from the club.

BTCTE first began in 2006, when Robbins first read an article about a 6-year-old boy enslaved in the fishing industry of Lake Volta in Ghana, according to the organization’s website. The child was malnourished, barely clothed, slept on a mud floor and spent 14 hours a day on a rickety fishing boat bailing water.

As a father with a 6-year-old at the time, Robbins felt compelled to take action to help save the lives of the defenseless children. He brought the issue to his high school students, and they embarked on a quest to learn more about modern-day slavery and raised funds to fight child trafficking, according to the website.

The funds raised over the years has helped over 150 students. Right now, the club is caring for 90 students, who range from ages 12 to late 20s.

“We send money for student’s education, pay for their technology, help get them new computers so they are successful with their schoolwork, help send money for their college after school and help them get a job,” Lunt said. “Once they are able to secure a job that is when we stop caring for them. It’s all about bringing them through their education to gain some independence.”

Robbins said the children they help have lost 10-12 years fishing on boats.

“It took a lot longer for them to become independent,” he said. “They are not going on a normal trajectory like these guys when they can graduate college at 21-22. They had a long interruption so a lot of them have been moving to trades because it was just too hard to be successful academically.”

Robbins noted to get into the education system in Ghana, a person must be good in all subjects.

“It’s so frustrating … it’s much harder to get into university there, just like here some people do far better financially with a trade than they do with a college education,” he said.

Three-and-a-half years ago, Robbins decided to open an office in Ghana, allowing him to work directly with the children.

“I have a staff of four people in Ghana, two staff in America and we talk 5-6 times a week,” he said, noting the staff works on marketing, consulting and bookkeeping. “I got frustrated with the organizations not doing well enough because I wasn’t their priority. I wanted things to be done the way I wanted it and really care for the children better so the office made all the difference.”

Robbins made his 10th trip to Ghana in July 2021 and he plans to go again this summer for three weeks to check up on things and see how the kids are doing.

“The visit this past year was great,” he said. “I couldn’t go the year before in 2020 in the middle of the pandemic before vaccines. It was good to be there this year and it was nice to see everybody. We had some dinners, got together and saw my kids I’ve known for years.”

Along with all the fundraising efforts through the school club, Robbins holds an annual donor sponsorship dinner. The dinner was held in West Orange on Nov. 17. He invited students to the dinner to help him collect funds. The dinner raised around $60,000.