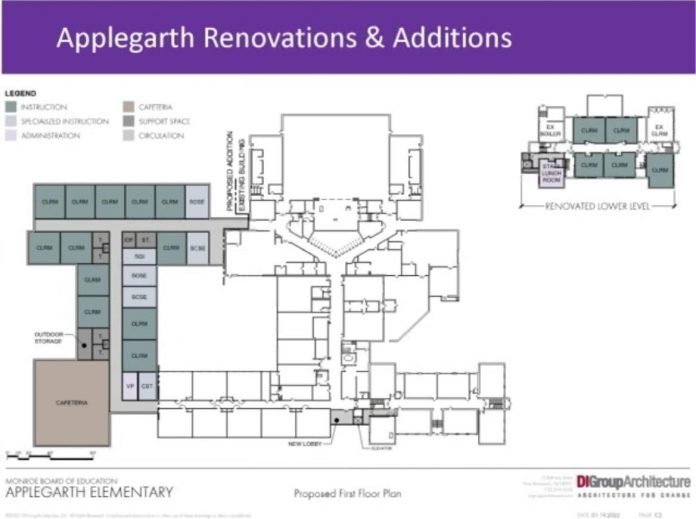 MONROE – Development of a third referendum to address the needs of facilities to house more than 1,400 unhoused students in the Monroe Township School District is underway.

“This is a culmination going through the last 10 years,” Board President Chrissy Skurbe said. “We have had various ad hoc committees that have looked at many different plans. They have contemplated taking ninth grade out of the high school and putting it back into the middle school and taking the sixth grade out of the middle school and putting it back into the elementary school.

“There has been a lot of work over the last 10 years trying to develop plans that the community would accept. We’ve had two failed referendums despite all of our efforts to get new schools built. So instead of going back out a third time with a plan, clearly the community did not support, of new facilities, we really wanted to take a look at what we could do, be fiscally responsible and add onto our buildings that currently exist.”

Rich Alderiso, chief operating officer at DIGroupArchitecture, presented the proposed additions and renovations of the three schools at a Board of Education meeting on Jan. 26.

A two-story addition is proposed for the front of the middle school, which will essentially create a new identity for the school with a new entrance way, Alderiso said.

“[The addition will] make it look like a new building school and also function as one,” he said. “We are taking advantage of existing place and keeping core spaces together. It enables us to really maintain the things that work well about the plan, it creates a new identity in a nice, tight compact way.”

The new 67,000-square-foot addition will add 32 classrooms for approximately 800 students. Also proposed is 8,300 square feet of renovations within the existing building to create more space with new administrative spaces and an expanded cafeteria.

“We are proposing a sizable addition to the north side of the building including classrooms, special education classrooms, (small group instruction) space, and a new cafeteria,” Alderiso said. “We also will take advantage of the current space in the original wing of the basement and renovate to create five classrooms there.”

The 20,030-square-foot addition allows for the creation of outdoor learning space in the courtyard and will create 17 classrooms for 475 new seats, four special education rooms and special group instruction and child study team spaces.

The basement space is about 5,000 square feet and creates spaces for music and art rooms.

A 6,500-square-foot addition is proposed for the high school on the north side to generate six classrooms for 150 seats.

“The space really lends itself to a nice addition,” Alderiso said, adding the addition will be an outgrowth of the existing building.

The estimated costs of the addition and renovations is between $4-5 million. The costs include both hard and soft costs.

Alderiso said they will develop the plans into three separate projects and submit them to the New Jersey Department of Education (NJDOE) for review and approval.

“They (NJDOE) generally review these plans for educational adequacy when you are modifying a building and footprint of students,” he said.

The developed plans will include each space with furniture and explain its purpose, size and proposed load for the space.

Skurbe said the updated demographic study is expected to be ready for the board in February.

“Once the NJDOE approves the submissions, which has a cost estimate for each school, they will come back to the district with a preliminary eligible cost,” Alderiso said. “They will indicate what state share is for each school. The numbers we included does not include the state share you would get. The state share would come off the top of these numbers and then from there, once approved and once you accept preliminary eligible costs, you move towards a referendum.”

Alderiso said the state share is calculated by the school funding formula, which takes into account renovations and additions, socioeconomic makeup of each school district, unhoused students, and square footage.

“Depending on actual renovation and addition amounts, it may wind up with more favorable numbers,” Alderiso said, adding it’s best to follow NJDOE facility standards.

Past referendums and studies

Last year, the administration had engaged in a limited design study to explore design costs for the construction of a new school facility at the site of Applegarth Elementary School similar to the Claremont Elementary School in Franklin Township, Somerset County.

In 2018 and 2019, the Monroe district attempted to address the dire needs of student enrollment growth through referendums; however, voters defeated both referendums.

In 2018, a $68.8 million referendum that proposed the construction of a new middle school was defeated by 143 votes. A third proposed referendum was deferred due to the novel coronavirus pandemic.