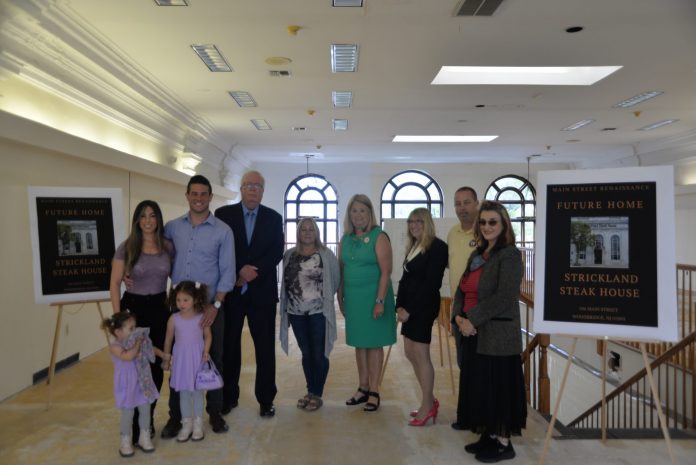 WOODBRIDGE – Six years ago, township officials made a commitment to invest in a transit village development for the business district in downtown Woodbridge in efforts to not let the district “wither away and die.”

Fast-forward as township officials embark on a new year, the business district is far from dying with the hard-to-miss construction going on around Main Street.

“Main Street in Woodbridge is poised for a fantastic year as new luxury apartment complexes start to open up along with the retail stores and restaurants on street level,” Mayor John E. McCormac said during the township’s 16th annual State of the Township address on Jan. 31.

The address was held virtually again due to circumstances surrounding COVID-19.

Time and time again, officials have said “luxury apartments would speed up the enhancement of our downtown on Main Street and it is happening right before our eyes,” McCormac said.

“Our Woodbridge train station is the focal point of this development and people want to live in Woodbridge because of that accessibility to Jersey City and New York City, plus the Jersey Shore,” McCormac said. “People also want to work and shop and dine in Woodbridge and the train gets them there. Just ask Dillon Music whose international customers come by plane to Newark Airport and then train to Woodbridge with a two-block walk to his shop.”

In June, Mike Strickland, a renowned New York restaurateur and lifelong resident of the Port Reading section of Woodbridge, signed a lease on the former Woodbridge National Bank building on Main Street to bring Strickland Steakhouse to the heart of town.

“He owns the West Shore Inn [Steakhouse], which was voted Best Steakhouse on Staten Island (New York), and his plans for our downtown are amazing,” McCormac said.

Strickland Steakhouse, a premier, upscale casual steak house, will serve as the cornerstone for the continued redevelopment of Main Street and the Downtown business district.

The downtown has seen the opening of Siwa Thai Restaurant along with the Daffy’s Holy Cow Donuts & Ice Cream store.

Ward 1 Councilwoman Sharon McAuliffe started renovations on her building on Main Street to bring back the iconic Knot Just Bagels, Shinko Japanese Steakhouse is about to open next to Vito Mazza Spa & Salon, and the owner of the corner building on Route 35 is about to start a full facelift of the building.

“The most famous project though, will be Eric LeGrand Coffee House, which is a couple of months from opening at Avenue and Green where Quick Chek was,” McCormac said. “Work has started and the plans are beautiful, but you don’t have to wait because you can get LeGrand coffee online.”

LeGrand is a former Rutgers football, who became an entrepreneur, motivational speaker, sports analyst, philanthropist, and author after his spinal cord injury in 2010.

Another large multi-million-dollar corporation is about to announce the opening of an office on Main Street, McCormac said, noting the business started in the township incubator program 10 years ago.

With all the development comes help with traffic improvements. In October, the state committed $9 million toward intersection improvements at Route 9 and Main Street/CR 514 and for a new traffic light at the intersection of Main Street and the Wegmans shopping complex.

Middlesex County, which owns Main Street, will be partner with the township for the project, McCormac said.

Route 1 in Avenel has seen progress moving away from “the unsightly structures” of motels and bars, McCormac said, with the opening of the orthopedic offices of Dr. Kenneth Swan plus White Oak Dental & Orthodontics.

The former Bud’s Hut site, which closed in 2015, will now house Bubbakoo’s Burritos and Smoothie King.

A national hotel chain called Cambria is replacing the City Motel and the decrepit bar in front of it, the mayor said.

The township is also working to replace a junkyard off South Inman Avenue with a future warehouse, which has been in the works for years.

Plans of a waterfront restaurant, a tiki bar, ice cream shop, fish market and expanded dog park with a walking track surrounding a boat storage area are on the horizon in the Sewaren section of the township.

With the successful purchases of the Pirate’s Cove and Captain Hook marinas in late 2020, the township has 77 boat slips.

“We will also have a bridge to connect our land across Smith’s Creek with [Alvin P.] Williams Park that is owned by the county,” McCormac said. “Significant engineering work is being done now on additional dredging of Smith’s Creek as well as the reconstruction of bulkheads and pilings on the Pirate’s Cove site that fell into tremendous disrepair over the last 20 years. We have $6 million in state and county funding for the project with the promise of several million dollars more to come.”

The financial incentive of PILOTS continues to increase economic development in the township which has allowed the township and Woodbridge Township School District to invest well over $150 million into the school district’s infrastructure over a 10-year-period.

“The township covers the cost of all of this construction and improvements because of our successful economic development efforts which have produced two power plants, dozens of warehouses and several transit village housing projects which pay PILOTS to our budget,” McCormac said. “The Board [of Education] finances the work, and we cover the annual debt service by allocating just 25% of the funding we receive from these PILOTs so that everyday taxpayers do not have to foot the bill for this work.”

In 2018, voters overwhelmingly approved a $57 million school referendum and in 2020, an $88 million referendum.

“We will have significantly expanded schools at Lafayette Estates No. 25 in Fords and Matthew Jago School No. 28 in Sewaren,” McCormac said. “Separate buildings at Lynn Crest School No. 22 in Colonia and Kennedy Park School No. 24 in Iselin are now combined to make it easier and safer for students to travel between classes without exiting their buildings into the often nasty elements.”

All schools will also have enhanced security, improved technology and various projects for air conditioning, electricity, classroom capacity and enhanced athletic facilities both inside and outside of the buildings.

In an article McCormac wrote for New Jersey League of Municipalities about the benefits of improvement PILOTS in 2014, he explained the township developed an unofficial policy of sharing 25% of PILOT revenue every year to meet the various needs of the school district.

The township and school district found the option to pass a bond ordinance to achieve a large-scale investment in the school district and to borrow the funds to make expenditures using the annual 25% payment to pay debt service on the borrowing allows for many more significant projects to be accomplished on an accelerated timetable.

The township’s investment must benefit not only the school district, but every resident of Woodbridge, McCormac said.

And unlike regular taxation, there is no limit to the amount of PILOT revenue a town can anticipate.

“At a time when court fines and hotel taxes and fees from other sources are still depressed because of COVID, our PILOTs provide a constant and steadily increasing source of revenue which helps us maintain a surplus balance of over $20 million every year and which help us keep the burden on our homeowners as low as possible,” he said.

McCormac said many do not understand how PILOTS work and “many have deliberately cast dispersions on the concept in an in an attempt to provide misinformation and false facts to the general public.”

“Every new business and residential home in Woodbridge pays property taxes, period,” he said. “Nobody is exempt other than non-profit entities. However, some projects cannot be financially feasible to the redevelopers, so we offer tax discounts to those entities to help them cover extraordinary costs such as environmental cleanup.

“Simply put, without a tax break, our brownfield sites would never be cleaned up and we would not attract new jobs for our residents without the financial incentive of PILOTs.”

The former Stern Senior Towers site paid no taxes in the past, but now will pay $23 million over 30 years, McCormac said.

“The land at Hess on Main Street with only solar panels paid minimal taxes and now will generate $48 million over the same period,” he said. “The strip mall across from Town Hall with several vacant storefronts paid less than $200,000 a year and now will pay $35 million over 30 years and the Avenue and Green project where Quick Chek and [Rug’s and Riffy’s Bar and Grill were [along Rahway Avenue] will pay just short of that.”

The 1.2 million-square-foot warehouse at the former site of the Woodbridge Developmental Center will pay over $2 million per year in the township’s largest PILOT to date.

“When added to the $44 million in profit the township made selling land for $51 million that we paid $7 million for, this project alone will fund the entire 2020 school referendum, which was highlighted by a brand-new school 4/5 in Avenel,” McCormac said.