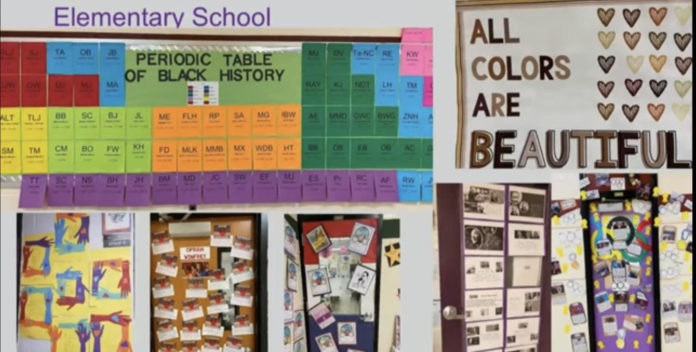 OLD BRIDGE – Teachers and staff across Old Bridge Township Public Schools found creative and interesting ways for their students through curriculum to commemorate the achievements of African Americans during Black History Month.

“We celebrate, commemorate African Americans this month, but we do it in a way to make sure the things we focus on in English and Social Studies, reading and writing, and good research are being done at the same time,” said Rocco Celentano, supervisor of Social Studies and Secondary English for the district.

Celentano presented how the district incorporates Black History Month, which is celebrated in February, into the curriculum at a Board of Education meeting on Feb. 15.

He said the district uses many sources, from handheld textbooks to electronic platforms.

In the elementary schools, students researched important African American figures from Jackie Robinson, the first African American to play in Major League Baseball, to Louis Armstrong, one of the most influential figures in jazz music, to Dr. Mae Jemison, a former NASA astronaut, who became the first Black woman to travel into space.

James A. McDivitt Elementary School holds a door decorating competition every year, which is judged by administration and leaders around the district. This year’s theme was on Black History Month.

At Old Bridge High School, students focused African American writers and poets in English class; and in Social Studies, the focus ranged from court cases that made a difference in Civil Rights to major figures in world history.

Costello said Grade 9 World History teacher Ashley Waldman found an app,where she took photographs of important figures from art museums and transferred them to pieces of paper for students.

In a drama class, the class discussed “The Color Purple,” a novel by Alice Walker, about an African American woman living in the South who survives incredible abuse and bigotry.

Students at the high school were also encouraged in their classes to walk through a gallery of African American authors and poets. The gallery included QR codes where students utilized their phones to get teacher assignments and worked through Microsoft platforms to answer questions.