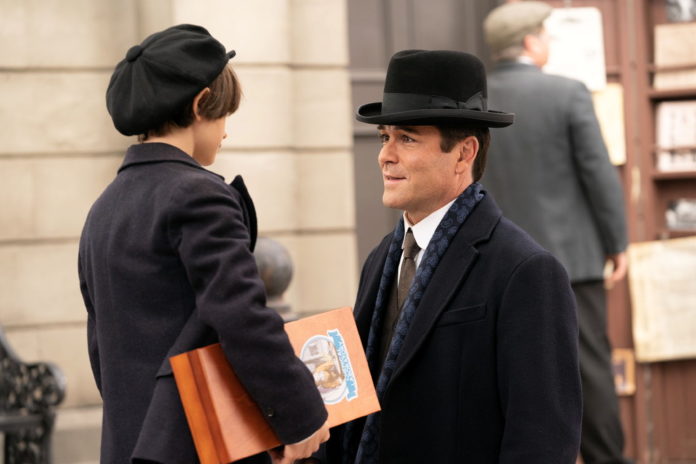 The 15th season of Murdoch Mysteries, the popular Canadian-produced drama set in turn-of-the-20th-century Toronto, has almost completed its run in Canada but is just beginning in America. The new season kicks off this Saturday evening on Ovation, which is the exclusive linear cable home for these episodes in the United States (they will also stream weekly on the Acorn TV service starting next Monday, Feb. 28).

Season 15 is Murdoch Mysteries‘ longest to date, with 24 episodes. It includes two directed by star/Executive Producer Yannick Bisson, who has played Detective William Murdoch since the show’s start in 2008, and one written by Maureen Jennings, on whose novels the series is based.

The two-part Season 14 cliffhanger finale revealed that Murdoch had a young son with his former lover Anna Fulford, whose murder he was out to avenge. Season 15 also begins with a two-part episode, which finds Murdoch journeying to Montreal hoping to find and protect that son, Harry (Etienne Kellici), from the Black Hand gang.

There is also plenty of additional drama and mystery as the first two episodes explore more of George (Jonny Harris) and Effie’s (Clare McConnell) dangerous situation with deranged twin sisters Dorothy and Amelia (both played by Sarah Swire); slowly start to reveal the ways that Violet (Shanice Banton) is dealing with her not-so-new husband; and continue the question of where Inspector Brackenreid’s (Thomas Craig) son, now escaped from jail, has gone off to. Some of these stories will continue at least partly into the season, according to Bisson.

“It’s not just a mystery-a-week type of show,” said the actor, who spoke while he was filming episodes 21 and 22 of the new season. “There are some continuing story arcs that do actually get deeper. … There’s some good stuff that’s lasting throughout the whole season. And there were a couple of surprises for me, I’ve got to be honest. … The Murdochs [William and his wife, Dr. Julia Ogden, portrayed by Hélène Joy] have some pretty wonderful surprises in store.”

There are, of course, some compelling mysteries to be found in each episode, as well. This combination of ongoing character development along with classic, stand-alone mystery investigations in some episodes is part of the appeal that has gained Murdoch Mysteries the long-standing popularity it enjoys.

Another attribute that keeps the show freshly creative even at 15 seasons is its period setting, which has allowed for the introduction of famous historical figures into some episodes. This season is no exception; psychiatrists Sigmund Freud and Carl Jung, silent screen actress Mary Pickford and James Naismith, inventor of basketball, will be among the notable early 20th century personalities making appearances.

“It’s a lot of fun,” Bisson says of being able to bring these famous names into the show. “We actually aired the Sigmund Freud episode this week [in Canada] … and it was a huge, great reaction. A lot of people were really happy in the way that turned out. And then that we’re able to keep weaving those characters in there.”

Featuring personalities like these has not only brought a verisimilitude to the series that further draws viewers into its world, but has also offered some historical education, both on a general and, as Bisson is proud to point out, a Canada-specific level.

“I’d have to say I learned something every episode, to be honest with you,” the Montreal native explains. “It’s a bit of a point of pride, and we do exploit that a little bit. … [The series] is set very unapologetically in Toronto. The city is one of the characters in the story, and we used to not do that here so much. We used to apologize for that, or pretend we were in another city. … [Now] we want Canadians to be proud of their country, their history and this show.”