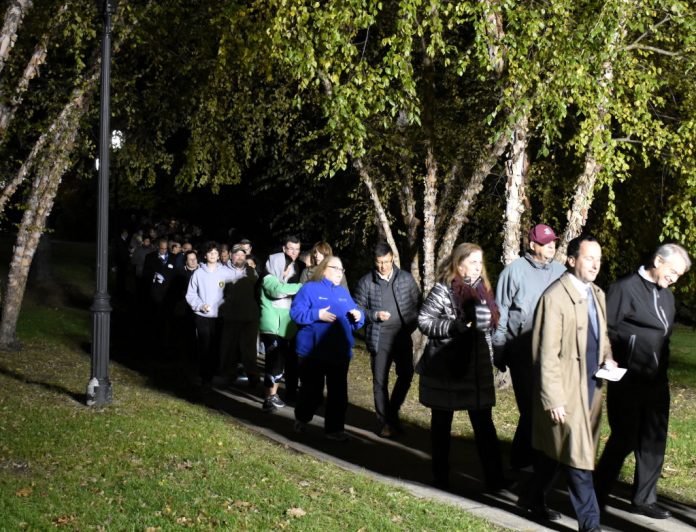 “How far would you walk to get a good cup of coffee? What if you are exploring secret paths or scenic routes while making new friends?”

On Sunday, Feb. 27, Princeton Future will host its first “I Walk to Coffee” neighborhood walk, a series of community events that aim to explore local issues in Princeton neighborhoods.

The idea came to Rubina two years ago when Alain Kornhauser, Princeton’s director of the Program in Transportation, spoke for Princeton Future and “put into words what [she] already subconsciously knew: driving kids to school is incredibly unsustainable.”’

“When I drive my son to school and back, that’s two trips to get one person to his destination,” Rubina said. She “continued to drive and feel guilty,” until last fall, when instead of driving back home after dropping her child off to school, Rubina left her car at the Princeton Shopping Center and walked to her office at TigerLabs on Nassau Street.

“I couldn’t believe how pleasant it was,” she said. “When I arrived at my office, Small World Coffee was right there. So here I was on my first ‘walk to coffee.’ ”

To Rubina, the Princeton Shopping Center had always seemed far from her home in the center of Princeton. Her morning walk to coffee got her thinking, “What if people who live a bit further don’t realize that they have the option to walk to fun things once in a while?”

A few months ago, Rubina met Coulson at a lecture by Jeff Speck, an urban planner and author of “Walkable City: How Downtown Can Save America, One Step at a Time.”

“I knew that Eve was a strong supporter of all things walkable and sustainable, and that she loves her neighborhood,” Rubina said. “On our test walk, Eve and I explored beautiful streets, got stuck in thorny bushes, climbed in muddy creeks, tested a hypothesis about an alley of trees and had to turn around multiple times. Can you tell we had a blast?”

Sheldon Sturges, one of the founders of Princeton Future, said he is excited to participate in the first “I Walk to Coffee” event. He said he believes that “we’ve become such a car-centric country” that sometimes we forget how enjoyable walking can be.

“Walking is a wonderful and healthy way to get exercise,” Sturges said. “There’s a huge focus in the urban planning world around the idea of walkability, and most people agree that a 15-minute walk is the best distance.”

Princeton Future’s mission, Sturges said, is to “openly bring together the people in the town that actually really know things and want to do something.”

Before COVID, Princeton Future would hold weekly meetings in the community room of the Princeton Public Library, and they have since switched to the virtual video conferencing platform Zoom.

Sturges started Princeton Future in 2000 with Robert Geddes, dean emeritus of the Princeton University School of Architecture, and Robert Goheen, former president of Princeton University. Since its founding, the volunteer urban planning group has helped advocate for the building of the garage in downtown Princeton and the creation of Hinds Plaza. When the COVID pandemic hit early 2020, Princeton Future organized weekly community Zoom calls with former Mayor Liz Lempert to discuss Princeton’s responses to the pandemic.

“The neighborhood walks are a new way for neighbors to get to know each other and discuss what they would like to see happen in Princeton over the next 20 years while simultaneously getting some exercise,” Sturges said.

Rubina hopes to connect “neighborhood ambassadors,” people who are interested in leading a walk and exploring different Princeton neighborhoods, so that in the future, Princeton Future will get to explore other neighborhoods that people do not necessarily think of as walkable. She asked, “Is it possible to get from Littlebrook to Small World Coffee on foot? Where can we start and get to LiLLiPiES Bakery in a reasonable time?”

For the walk on Feb. 27, Rubina has planned a street route from the Hun School to Sakrid Coffee, and on the way back, a scenic, park-like route, though she explains that “there are no set agendas apart from discovering new paths, questioning our notions of ‘walking distance’ and sometimes getting our shoes muddy.”