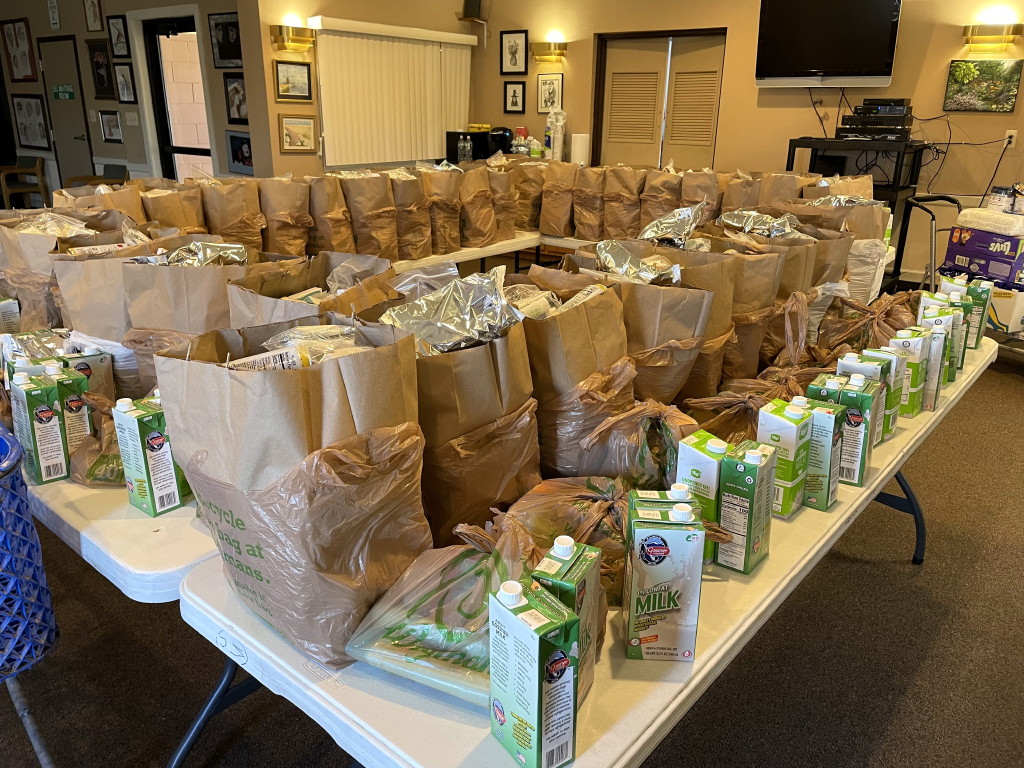 MANALAPAN – On a recent Saturday morning, vehicles lined up in front of the Manalapan Senior Center on Freehold-Englishtown Road as the drivers waited for a delivery of food that would continue to sustain them and their families.

And that food was brought out to every vehicle by the charitable individuals who volunteer their time to support the Samaritan Center, which has been assisting people in need for almost 40 years. The center has no paid staff and relies on volunteers to operate.

The Samaritan Center began as a joint ministry of St. Thomas More parish and the Old Tennent Presbyterian Church, both in Manalapan. It operates a food pantry whose purpose is to provide supplementary food for the poor and underprivileged in Manalapan, Englishtown, Marlboro, Morganville and Millstone Township.

Martha Amato is the executive director of the Samaritan Center. She coordinates the volunteers and the food pick-ups, which are held every two weeks.

The Samaritan Center is overseen by a Board of Trustees and the president of the board is Tony Morelli, a former longtime resident of Manalapan who served on the Manalapan-Englishtown Regional School District Board of Education and on the Township Committee.

As Amato and the volunteers went about the task of handing out shopping bags packed with food, Morelli said in an interview that the mission of the Samaritan Center in 2022 remains what it was when the organization was founded in 1988.

At that time, Morelli said, individuals in need were reaching out to local churches and those requests for assistance led to the formation of the Samaritan Center. The original location was a building on Harrison Avenue in Englishtown.

Although the communities being served were suburban in nature and the residents were mostly self-sufficient, there was then and remains now a portion of the population that requires assistance. In 2000, for example, 17% of the population in Manalapan was living below the poverty level, Morelli said.

“We do solicit contributions from the community,” Morelli said. “Those contributions allow us to survive. We get our food from Fulfill, which is the food bank of Monmouth and Ocean counties, and from donations.

“We especially appreciate the food drives local schools hold to support the Samaritan Center. Those food drives are valuable because they teach the children there are people in their community in need,” he said.

During the height of the coronavirus pandemic, the Samaritan Center was forced to suspend its operation, but federal funds that were being provided to families helped to sustain people in need, Morelli said.

Now the federal assistance is ending, inflation has hit the United States and people in the area are once again reaching out to the Samaritan Center for assistance, he said.

“Mayor Susan Cohen and the entire Manalapan Township Committee has supported us. During COVID, we put food at town hall because people were calling her,” Morelli said, adding that Knights of Columbus Council 5903 in Englishtown and the Yorktowne Social Club in Manalapan have also been supporters of the Samaritan Center.

Morelli said donations of funds and food are gratefully accepted. Donated funds help the Samaritan Center pay for expenses that include buying food, paying for insurance and paying to operate a vehicle. Since the Samaritan Center is a 501(c)3 organization, all contributions are tax deductible.

The Samaritan Center does not discriminate against anyone because of race, color, creed, sex, religion, age, mental or physical impairment, national origin or military status.

The Samaritan Center recommends that individuals who are in need of food call to make an appointment prior to a pickup.

For more information regarding donations to the Samaritan Center, call 732-446-1142 from 9 a.m. to 5 p.m. Monday to Saturday. After hours, leave a voicemail.