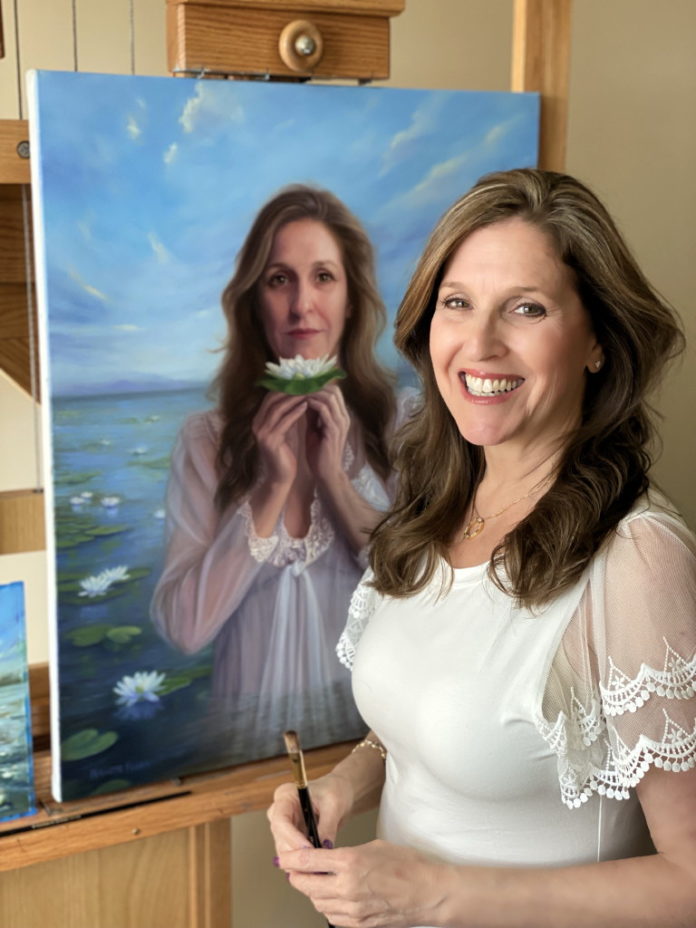 Portrait artist Nanette Fluhr of Matawan has been selected as the winner of Manhattan Arts International “HerStory” 2022.

Fluhr’s oil painting “A Lotus Grows in the Mud” was selected from worldwide entries based on originality, innovation and technical skill; art that has a significant impact on the viewer, inspires contemplation and insight, and transforms individuals, according to a press release.

Judge Renee Phillips wrote, “It is an honor and pleasure to have selected Nanette Fluhr as one of the exhibiting artists in the Manhattan Arts International ‘HerStory’ 2022 exhibition with her painting ‘A Lotus Grows in the Mud.’ I also presented Nanette with an Artist Showcase Membership Award.

“Upon receiving her entries it was immediately apparent she has superior artistic talent in realistic portraiture in addition to her masterful landscapes and still life. Her extraordinary attention to capturing the essence of her subjects with technical prowess claimed this top award. I was also impressed when I learned about Nanette’s many professional achievements.

“Furthermore, Nanette uses her talent to contribute to bringing positive change to the world. She donates a portion of her fees from her portrait commissions to Smile Train, the largest worldwide organization committed to repairing cleft palates,” said Phillips, who is the founder, director, editor of Manhattan Arts International.

With more than two decades of professional experience, Fluhr has created portraits that hang in public and private collections worldwide, according to the press release.

Known for her sensitive portraits and exacting technique, Fluhr has received awards from prominent institutions including the Art Renewal Center, the Portrait Society of America and the School of Visual Arts, where she studied the techniques of the old masters under John Frederick Murray.

Most recently, American Women Artists honored her with their Distinguished Achievement Award.

Fluhr’s work has been featured at the European Museum of Modern Art in Barcelona, the Butler Institute of American Art and the Wausau Museum of Contemporary Art, as well as in a six-museum exhibit on contemporary American realism in China, according to the press release.

Manhattan Arts International curates “HerStory,” an annual exhibition of art by women artists. According to the press release, its mission is to continue to present annual “HerStory” exhibitions until there is a fair and equal balance of women artists represented by art museums, galleries, art book publishers, major private and public collections, auction houses and the media.

To learn more about Fluhr and to view her artwork, visit www.nanettefluhr.com