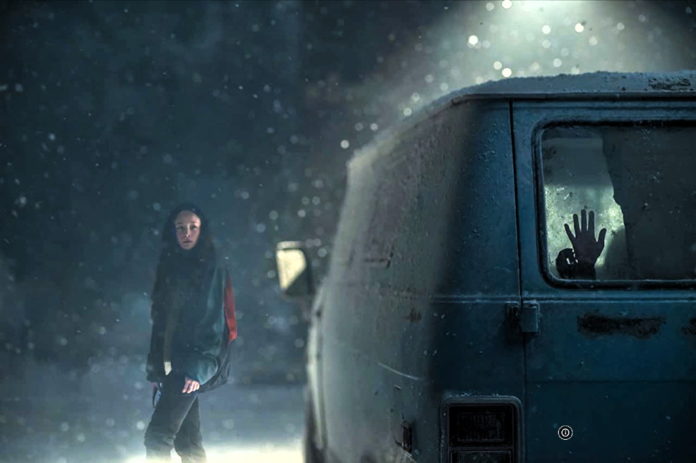 Snow: A fresh, new, layer of white powder can cover the worst of the winter landscape. Blizzards, however, create chaos to all trapped within, hiding the obvious from discovery. In the new film No Exit, now playing on Hulu, as a blizzard shuts down the local interstate, the sheriff opens a roadside visitors center as a temporary respite for a group of weary strangers looking for shelter from the storm.

Darby (Havana Rose Liu) is trying desperately to reach her mom. In fact, Darby left the care center she was being treated in and set off in the middle of the blizzard in an attempt to reach her mom’s hospital. When the roads become impassable, Darby joins a group of strangers to ride out the weather together in the building which is undergoing renovations.

Waiting for her there is Ed (Dennis Haysbert) and Sandi (Dale Dickey), a couple traveling for a special getaway to Reno. Lars (David Rysdahl) is headed home to Nevada. And Ash (Danny Ramirez) is also headed home, to a city outside of Denver.

During a break from the card game that is started, Darby heads to the parking lot in hopes of finding a cell signal, only to be left in the cold. She does come across something else — a girl’s screams emanating from a locked van. Someone inside must have knowledge of this girl, who appears to have been abducted — either that, or someone else may be lurking around the center. She can’t run, can’t hide, but can she survive the night?

No Exit is a tense and unexpected delight. A film that is so simple, spending little time bringing these strangers together, is layered in complexity that goes beyond one building on this fateful night. Liu is tasked with being the focus of a room filled with mysterious strangers, and she exhibits the paranoia and fear that one would expect. Her portrayal of Darby transforms the audience into anxious viewers and hopeful cheerleaders for a positive outcome.

Haysbert provides a unique combination of comfortability and knowledge in the midst of the mayhem. His calm yet stern demeanor provides Ed with an aura of power and control that translates to the audience. While Liu and Haysbert lead the way, it takes the efforts and delivery of a talented cast inserted into tight quarters to establish the tone for the audience. Anyone who has experienced the claustrophobic nature of a blizzard will feel trapped right alongside these individuals.

The confusion of being lost in a blizzard creates a thrilling setup for No Exit. There can be clarity in the chaos, and it is clear that No Exit may lead to nightmares, but these are the bad dreams we enjoy.