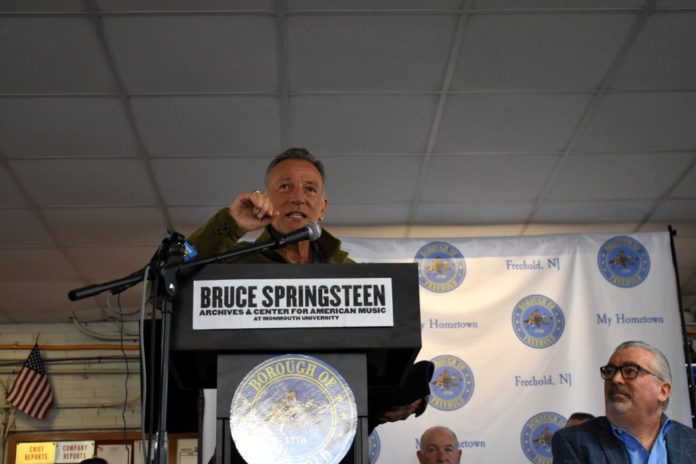 FREEHOLD – As if Bruce Springsteen was not already leaving enough of a legacy in his hometown of Freehold Borough, now he will leave one in brick and mortar.

The Bruce Springsteen Archives and Center for American Music at Monmouth University, West Long Branch, in collaboration with Freehold Borough municipal officials, have announced a plan to renovate the Freehold Fire Department headquarters, 49 W. Main St., and turn it into My Hometown: The Bruce Springsteen Story Center.

The plan was announced by Mayor Kevin Kane, members of the Borough Council and Eileen Chapman, the director of the Bruce Springsteen Archives, during an event on the morning of March 8 in the firehouse.

Springsteen attended and spoke at the event and said it was his longtime friend Mike Wilson, who served as Freehold Borough’s mayor for more than 25 years, who brought the idea to him several years ago.

A committee that includes former mayor Roger Kane, the father of the current mayor, has quietly been working on the initiative since the idea was first mentioned.

Springsteen, who grew up in houses on Randolph Street, Institute Street and South Street, said he consented to the idea of an exhibition space that is expected to include artifacts, photographs, multi-media displays and interactive displays.

Several speakers acknowledged that Springsteen landmarks in the borough already draw visitors to the community. Two of the homes in which Springsteen lived are still standing; the home on Randolph Street is not.

Freehold Borough officials recently announced plans for the fire department – which is celebrating its 150th anniversary – to move out of its longtime headquarters and into a new facility, but did not immediately disclose what use would fill the fire department’s space.

The fire department’s move to a location to be determined is part of the Freehold Center Core Redevelopment Plan on which municipal officials are moving forward.

In remarks at the event, Kane said he “could not wait to get out of bed” on March 8 to share the news with Freehold Borough and essentially the rest of the world.

“This (exhibition space) will serve as the catalyst for the redevelopment of the borough,” the mayor said. “It will bring people from around the globe to the Boss’s hometown.”

Monmouth University President Patrick F. Leahy addressed the packed firehouse, and noting that with Springsteen joining the guests on the dais and waiting to speak, said, “For the rest of my life, I will be able to say I opened for Bruce Springsteen.

“This is an incredible opportunity for Monmouth University and the Springsteen Archives. I am looking forward to a decades-long collaboration with Freehold Borough,” Leahy said.

Glenn Cashion, who is Springsteen’s first cousin and a commissioner on the Monmouth County Historical Commission, said the announcement regarding My Hometown: The Bruce Springsteen Story Center is “awesome” and “will celebrate his enormous contribution to American music.”

Kevin Coyne, who is Freehold Borough’s historian and who will curate and program the exhibition space with the Bruce Springsteen Archives and individuals with significant ties to Springsteen, said during his remarks that the singer-songwriter is “the defining storyteller of the last half-century.”

Chapman said, “The Springsteen exhibition in Freehold will allow us to provide not only exciting exhibits that tell the story of Springsteen’s early years, but also dynamic educational and public programs with strong ties to the community and area schools.

“This exhibition will be an educational resource for teachers, with pre-tour activities for school groups. In addition, visitors will come from all over the world to see the exhibit,” she said.

As he made his way to the microphone, Springsteen accepted a sweatshirt from Kane with “The Boss” stitched across the front.

Speaking in front of a friendly audience, he said Wilson brought the idea for the Freehold Borough exhibition space to him. Calling the firehouse “the coolest building in town,” Springsteen said he consented to the idea if everyone involved could “agree on how it’s going to work.”

“The bottom line is you can’t get away from the fact it feels bizarre. I sat three blocks from here and came up with a few songs and things that I liked and the idea that 50 years later anybody was going to be interested in them at all, I mean what are the odds, folks? They’re very small.”

Springsteen said his memories of Freehold Borough “remain an essential part of me (and) I could not even tell you why. I don’t know why. All I know is that is has. That’s the reason I’m skipping breakfast to be here today. All I can really do is thank everybody, Mike (Wilson) and everyone here on the stage, you guys are all the best …

“It’s been wonderful having this town as the center of my art and of my life. I look forward to doing that until they put me in a box. Thanks,” Springsteen said.

Kane, Leahy and Springsteen then signed a memorandum of understanding which links the parties and puts into motion the plan for My Hometown: The Bruce Springsteen Story Center.