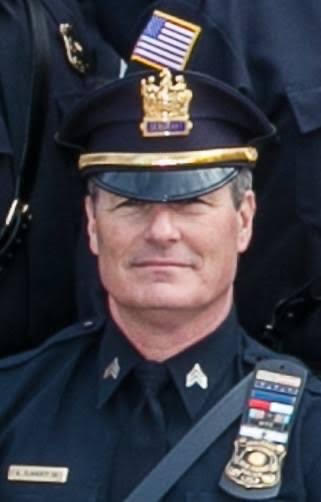 METUCHEN – Come June 1, the Borough of Metuchen will say goodbye to the “chief of the chiefs” and welcome a new police chief to the role, who council members said “personifies community policing” at its best.

The Borough Council approved a resolution to appoint Arthur M. Flaherty Sr. to the top role at a meeting on March 28.

“We reluctantly accepted the retirement of long-time police chief David Irizarry a few meetings ago,” Mayor Jonathan Busch said. “He has served the borough for more than 30 years and was our chief for seven of those years.”

Busch called Irizarry, who has also been serving as chief of the New Jersey Association of Chiefs of Police for the past three years, “a class act” and “tremendous asset” to the borough.

“He taught me about law enforcement in ways I never understood. He answered every question I had,” he said.

And although Irizarry is leaving, borough officials said the man who is replacing him could not be any more “honorable.”

Councilman Tyler Kandel said Flaherty is always willing to volunteer his time to do whatever it takes to make the borough a better place to live.

“He bleeds Metuchen royal blue through and through,” he said.

Councilwoman Linda Koskoski called Flaherty a “100% solid human being” who always helped her on different subjects.

Councilwoman Dorothy Rasmussen said Flaherty is a fount of knowledge when it comes to state statutes and has always been there to either help or provide advice.

Flaherty started his law enforcement career as a patrolman with the Metuchen Police Department in 1993. He did time on bike patrol and plain clothes patrol.

Through the years, he moved up the ranks to serve as corporal, detective, patrol sergeant and administrative sergeant. In 2017, Flaherty was promoted to patrol lieutenant.

Flaherty is a lifelong resident of the borough. He graduated from Metuchen High School in 1985. He attended the University of Vermont on a basketball scholarship for one year and then transferred to St. Peter’s University in Jersey City where he played basketball and studied from 1987-90.

After graduating, he worked for Pershing Division of DLJ Securities on Wall Street in New York until December 1992.

He is currently studying to earn a master’s degree from St. Elizabeth University in Morristown.