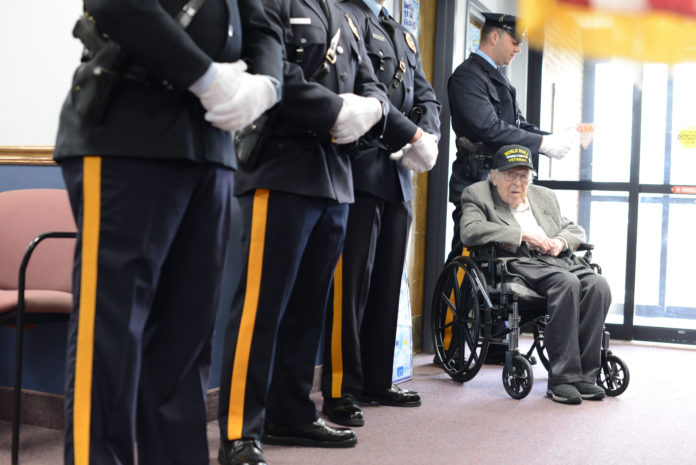 MONROE – At age 98, Seymour Nussenbaum was “finally” recognized for his service with the 23rd Headquarters Special Troops, known as the Ghost Army, during World War II.

The Army veteran is one of nine remaining living members of the 23rd Headquarters Special Troops, known as the Ghost Army, to recently receive a Congressional Gold Medal award through the efforts of The Ghost Army Legacy Project, whose mission is to preserve the legacy of the men.

“This has been going on for a few years,” Nussenbaum said of the push for the award. “We are all now in our upper 90s.”

Nussenbaum was a member of the 603rd Engineer Camouflage Battalion – the largest of the four sub-units in the 23rd Headquarters Special Troops – whose job it was to build fake tanks, jeeps, airplanes and artillery to disguise the actual location of advancing allied forces and fool the enemy.

“We would come in during the night to position inflatable equipment,” Nussenbaum said.

There were 1,100 soldiers in the entire unit.

President Joe Biden signed legislation last month awarding the Gold Medal to the Ghost Army units, a long-overdue recognition of the dangerous and heroic exploits of the Ghost Army, which is credited with saving thousands of lives during the war, according to The Ghost Army Legacy Project.

“It was nice,” Nussenbaum said of the special ceremony held on March 26 at the Monroe Township Municipal Building.

“Mr. Nussenbaum is one of an elite group who served our country in a brave and heroic way,” Dalina said. “Monroe Township is home to many brave men and women who served in various capacities as part of the United States Armed Forces. It was my honor and pleasure to join the recognition ceremonies to thank him for his service.”

Nussenbaum entered the U.S. Army in 1942 when he was 20 years old. When the war started, he was attending college at the Pratt Institute, a private university, in Brooklyn, New York, in hopes to become an illustrator.

There he took a class in camouflage to prepare for the Army, which was seeking artists trained in visual observation to serve in the camouflage unit. His instructor was in the Army.

When Nussenbaum entered the service, he informed them of his preparation. However, he was first assigned to the artillery outfit in Virginia. After sending a letter making his case again to serve in the camouflage unit, he was finally transferred into the unit in Fort Meade, Maryland. The unit trained at Fort Meade and Camp Forest in Tennessee.

“We were told our job was top secret and we were told not to tell anybody,” Nussenbaum said.

When the war ended in 1945, Nussenbaum spent the rest of his service in New York, Mississippi and back to New York before being honorably discharged in November of that year.

After leaving the Army, Nussenbaum went back to school. In 1947 he got married to Vera and they went on to have two daughters. They lived in Brooklyn for 10 years and when he got a job in New Jersey, the family decided to buy a home in Old Bridge where they lived for 40-plus years.

During the time he entered the Army and left the Army, illustration had evolved into photography, which changed his course of study.

“Photography is not what I did,” he said.

“My kids used to get a kick out of seeing my work,” he recalled.

His two daughters and their families with his three grandchildren attended the ceremony. Nussenbaum received letters from the state senators, a flag that flew over the U.S. Capitol, a proclamation from Monroe Township, and a letter from Biden, along with a picture of the president signing the bill.

The ceremony also included the Honor Guard from the Monroe Township Police Department and the Color Guard of American Legion Post 522 in Monroe.