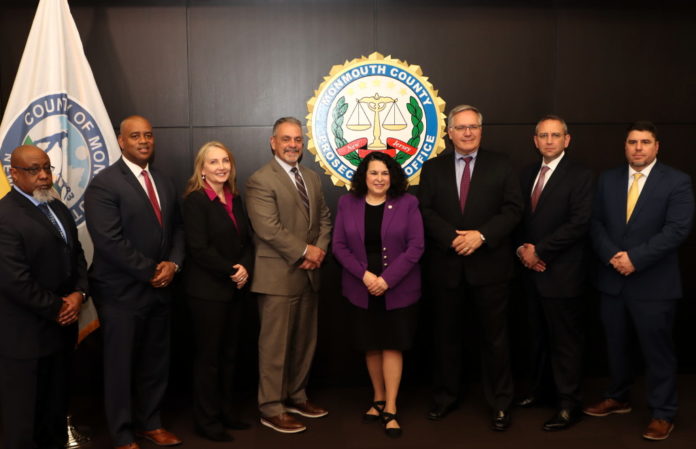 “The individuals so honored constitute the very best of us and we all feel deeply privileged to have such talented and motivated investigators installed into positions of leadership,” Linskey said. “They have already made us proud, but we firmly believe that for each, their best is yet to come.”

With the promotion, Morgan became just the third woman to hold the title of deputy chief for the office, with all three serving since 2006. Now in her 21st year with the prosecutor’s office, Morgan started as a detective in the Crime Scene Unit on Sept. 4, 2001.

One week into the job, she and her fellow investigators traveled to Ground Zero in New York City to assist with rescue and recovery efforts following the Sept. 11 terrorist attacks, according to the press release.

In her prior roles, Morgan has participated in or directly supervised many of the most high-profile investigations in the county over the past two decades.

In addition, she has served as the Child Abduction Response Team commander on missing child investigations, oversaw a comprehensive audit and revamp of the office’s evidence vault, and served as a mutual aid staging coordinator during periods of unrest or emergency, such as the aftermath of Superstorm Sandy in 2012.

The additional promoted investigators will be fulfilling the following roles:

• Capt. Chapman will supervise the Criminal Investigation Section. He joined the prosecutor’s office in 2003 after serving with the Asbury Park Police Department.

Formerly the office’s lieutenant in charge of the Major Crimes Bureau, directing its day-to-day operations and supervising a staff of 19, Chapman also oversaw the Homicide and Property Crimes units, the Fatal Motor Vehicle Accident Unit and the Child Abduction
Response Team, among others.

Chapman received the 200 Club of Monmouth County Merit Award in 2015 for saving the life of a man who was threatening to commit suicide by jumping off a bridge, calmly talking him down from a high ledge after about 15 minutes of conversation, according to the press release.

• Lt. Hilton will supervise the Trial Support-Fugitives-Juvenile Crime-Administrative Service Bureau. He joined the prosecutor’s office in 2014, having spent the previous 27 years as a special agent and group supervisor with the federal Drug Enforcement Administration.

Previously the sergeant overseeing the Trial Support Unit, Hilton also has also managed the Narcotics Strike Force, running its day-to-day operations and supervising eight detectives. In addition, he has managed the office’s equipment supply and distribution operations, according to the press release.

• Lt. Weisbrot will supervise the Major Crimes Bureau. He joined the prosecutor’s office in 2012 and now has a total of 20 years in law enforcement, having previously served as
a detective with the Burlington County Prosecutor’s Office, a police officer with the
U.S. Capitol Police and a Special Law Enforcement Officer with the Long Branch and Avon-by-the-Sea police departments.

Previously, Weisbrot served as the sergeant supervising the prosecutor’s office Asbury Park Satellite Office; in that capacity, he also oversaw the Monmouth County Arson Task Force, served as an investigative liaison to the Monmouth County Emergency Response Team and Rapid Deployment Force and was an assistant with the Child Abduction Response Team.

Previously a detective assigned to the Major Crimes Bureau, investigating violent crimes, he joined the prosecutor’s office in 2014, previously serving as a patrolman and detective with the Point Pleasant Beach Police Department.

Petruzziello was assigned the role of lead detective on State v. Caneiro, a quadruple homicide that took place in Colts Neck in 2018. For the last year he has served as the office’s instructor for the Integrated Communication and Tactics and the Active Bystandership for Law Enforcement training regimens.