Marion Vinyard, early supporter of Springsteen, passes away at 87 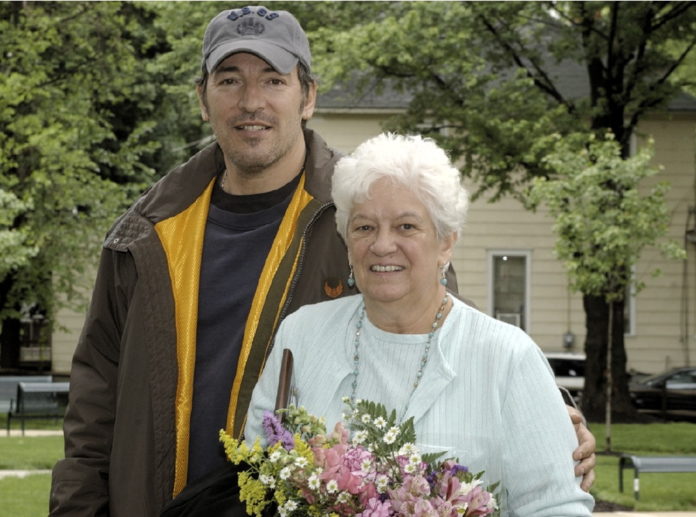 Marion Vinyard, who along with her late husband, Gordon “Tex” Vinyard, provided support and a space to practice for the Castiles in their Freehold Borough home in the 1960s, has died.

The Castiles were a popular local band who counted Bruce Springsteen and the late George Theiss among their members. Springsteen, 72, is the last surviving member of the Castiles.

Vinyard, 87, died on Jan. 5. She was a lifelong resident of Freehold.

Her passing was announced in a March 30 post on Facebook by her niece, Barbara Keune, who wrote, “It is with a very sad heart that I share my aunt’s passing. I feel very grateful to our Lord that he gave me these last few years to help and comfort her.

“We shared many old family stories and spent many days a week riding to the pond to see ducks and visiting the family with flowers at their graves. She was a fighter and her last year was battling cancer.

“I miss her and our afternoons together. I hope Aunt Marion and all her brothers and sisters are having one heck of a reunion with Grandma and Grandpa.”

Private services for Vinyard were held at the Higgins Memorial Home, Freehold Borough, and internment was at the Brown family plot in Maplewood Cemetery, Freehold Township.

According to her obituary, prior to her retirement, Vinyard was a 50-year employee of the Monmouth County Board of Elections. For 39 of those years she worked in the office of the Superintendent of Elections/Commissioner of Registrations.

Vinyard was a member of the First Presbyterian Church of Freehold, where she dedicated herself to working the Sunday School program and serving as a deacon. She belonged to the Children’s International Organization and sponsored several children in Guatemala.

In 1965, Tex Vinyard, who died in December 1988, was the manager of the Castiles and the Legends, both from Freehold.

According to Marion Vinyard’s obituary, “This group of young boys gathered at (the Vinyards’) Center Street duplex, wrote songs and practiced daily. This was the beginning hometown roots of Freehold’s Bruce Springsteen. Marion and Tex had no children and Marion looked over, guided and cared for these young people, thinking of them as her own boys.”

On May 18, 2002, Freehold Borough officials dedicated property at the corner of Center and Jackson streets as Vinyard Park as a memorial for the contributions and dedication of Tex and Marion Vinyard. Springsteen and Theiss joined Marion Vinyard at the dedication ceremony.

Vinyard was predeceased by her parents, Elwood and Dorothea Brown; and all of her brothers and sisters, Donald Brown, Woodrow Brown, Margaret Hurley Wright, Dorothy Burdge, Phyllis Smith and Carolyn Schue. She is survived by 17 nieces and nephews and numerous great nieces and nephews.

Prior to the dedication of Vinyard Park, Marion Vinyard spoke with staff writer Clare Marie Celano. Below is part of that article:

“When asked to go back to the beginning, Marion said that all she knew was that her dining room was gone for good. Memories flooded over the face of the woman who said she knew in her heart that Springsteen would make it.

” ‘He always said he was going to make it,’ Marion said. ‘I believed him.’

“She remembers when the ‘boys,’ as she endearingly referred to the members of the band, would practice while their sisters and girlfriends prepared food for them.

” ‘We gave them a lot of tuna fish,’ Marion said, laughing. ‘The girls would also make pizza and hot dogs and sometimes biscuits, too.’

“Soon many other kids started arriving to watch the show.

“From Marion’s description, the small duplex swelled with both the music of the boys’ playing and the audience would be tapping their own brand of rhythm to the sounds they heard.

“She said she doesn’t remember anyone complaining about the volume of the music.

“Marion said she enjoyed the kids in all of the bands Tex eventually ended up managing.

” ‘We built a whole family over the years,’ she said.

“Springsteen thanked the couple during his November 1996 concert at St. Rose of Lima School.

“In dedicating ‘This Hard Land’ to Marion Vinyard, Springsteen said of the couple, ‘They let us play loud. When Tex would come home, he’d somehow have an extra microphone that we needed. I can’t say how valuable that support was. Marion, I love you very much.’

“When asked how she and Tex felt as they watched Springsteen’s rise to fame in the 1970s and 1980s, she said she always knew he would make it.

” ‘Tex was tickled pink,’ she said. ‘We were both so very proud of him. His success made us both very happy.’ ”

Newspaper Media Group reached out to Springsteen for a quote and he responded, saying, “Without folks like Marion Vinyard, rock and roll would’ve had no place to gather, grow and nurture itself.

“Marion generously turned over her dining room to a bunch of 15-year-old punks from the neighborhood so they’d have a place to go and hone their craft. The debt I owe her can’t be overstated,” Springsteen said.