Referendum on track for November in Metuchen; full-day kindergarten is proposed 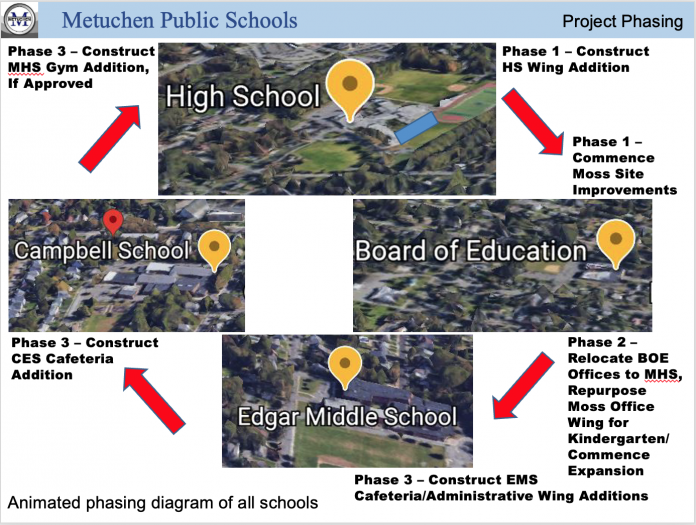 METUCHEN – The Metuchen School District is planning to use the 22.23% increase in state aid to offset operation costs associated with proposed additions and renovations to all four school buildings, which is on track for a referendum in November.

“We are going to deposit [the additional state aid] to a capital reserve and other surpluses that we have and put it into a reserve account that can be used to offset [the proposed additions and renovations],” School Business Administrator Michael Harvier said.

The subtotal of the proposed additions and renovations is $1.5 million, he said.

The referendum is proposed to include three questions, which the board divided in terms of “wants” and “needs.”

The district had to include the proposed operating costs as part of the budget application to the state, Harvier said.

The Metuchen Board of Education (BOE) approved the tentative $45.5 million budget at a meeting on March 22, to fund the operation of the school district from July 1, 2022, through June 30, 2023.

The amount of school taxes an individual pays is determined by the assessed value of his home and/or property and the tax rate that is set by the school district.

The district is projecting additional state aid from an addition of 100 students for its proposed full-day kindergarten. Currently, the district, with part-time kindergarten, students account for only half a point towards state funding.

Additional funds also include anticipated payment in lieu of taxes (PILOT) funds from the Gulton Tract redevelopment and elimination of the six period stipends for the kindergarten teachers for the extended days.

State aid is just one factor influencing the tax rate. Fund balances, ratables and the effect of enrollment on appropriations are also contributing elements.

A public hearing and final adoption of the budget is scheduled for April 28.

Board member Jonathan Lifton, who chairs the referendum committee, updates the public on the proposed referendum at the monthly board meetings.

Over the last 30 years, the student population has grown approximately 50%.

“Even since the last referendum in 2005, the student population has grown 20%,” Lifton said.

The referendum would allow for a grade alignment to create more space at Edgar Middle School and Campbell Elementary School by moving the fifth grade from Edgar to Campbell and move first and second grades from Campbell to Moss School.

Officials said the district grade alignment is more “socially and academically appropriate” and would provide improved traffic safety at the schools.

Lifton said the board has heard the request from the public for full-day kindergarten, which has been wanted since former Schools Superintendent Terri Sinatra’s administration.

He said Edgar Middle School is the most crowded school among the four schools.

Each school is proposing a new cafeteria and/or expansion, which would allow students to eat at “healthier times in a healthier environment” and air conditioning at each location.

Metuchen High School is proposing a new gym and the possibility of lights and turf for the football field.

Board offices are proposed to move from Moss to the high school.

A tax impact summary will be available in the coming months. The board is waiting for state aid for constructions.