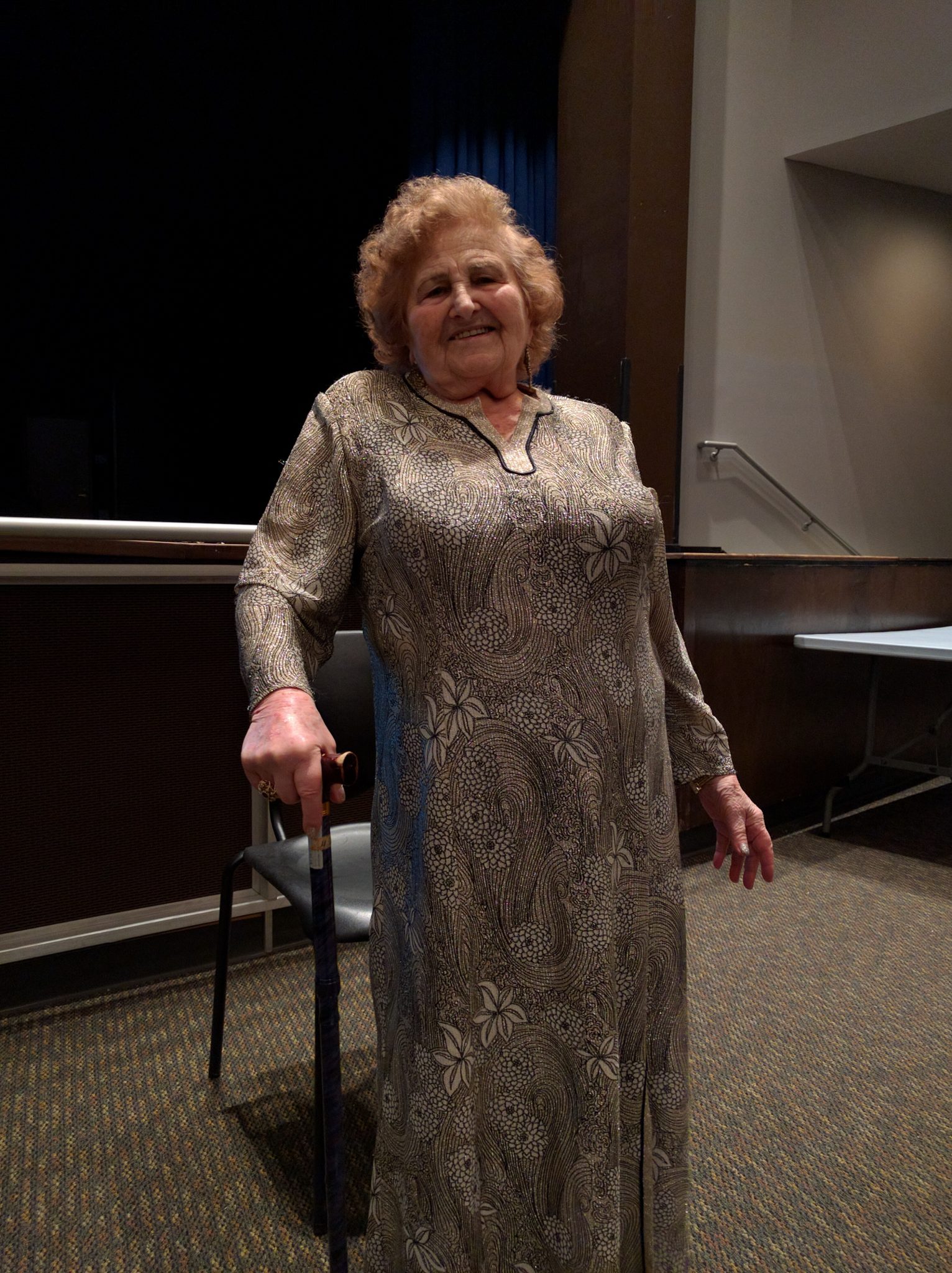 NORTH BRUNSWICK – Even into her 90’s, Frida Herskovits made it her mission to tell the story of her life, making sure young people learned the lessons of the Holocaust and pledged to be kind and hopeful.

Herskovits visited North Brunswick Township High School more than 20 times over 10 years and spoke to a total of about 4,000 of Beth Passner’s students over the years.

Herskovits was one of 10 children. At about the age of 14, she was forced onto a train from her home in Czechoslovakia. She said her non-Jewish neighbor wanted to hide some of the children, but her mother did not want anyone to separate; at the time, no one knew what loomed ahead.

However, once aboard the train, her father, who was in World War I, knew it was headed the “wrong way,” i.e., to Poland where the Nazis had set up concentration camps.

Herskovits found herself all alone in the Birkenau Reception Center, sleeping on wood with five other people to a bed “like sardines.”

Herskovits was about 16 when she was liberated by the British from the Bergen-Belsen concentration camp. She was shuttled to Cyprus because Jews were not allowed to go to Palestine. She found her way to Israel and got married. She eventually made her way to the United States with her husband and her 6-year-old son to reconnect with a relative.

Herskovits passed away in September 2021 at 95. As part of a commemoration of Yom HaShoah, Holocaust Remembrance Day, Passner and her students presented a video tribute to Herskovits to her daughter, Hannah, during the North Brunswick Public Schools Board of Education meeting on April 27.

“We pay tribute to the strongest and most inspiring person I have ever met in my lifetime,” Passner said. “Students heard not just about her story of survival, she also shared with them messages of hope, messages about acceptance and about tolerance, and about perseverance.”

Passner said Herskovits was a bit of a local celebrity, allowing students to take photos with her and write her letters.

“She always wanted to make sure she was having an impact on the students, that her story was told so that the memories of those lost in the Holocaust were not lost in vain,” Passner said.

Nicole Fosko, a 2011 graduate, said Herskovits was a strong woman of short stature who had a big personality. She spoke about resilience and about how to move forward while honoring the past. She wanted to show the better side of humanity.

“It’s one thing to learn about the Holocaust in a textbook, but to hear a personal account is unparalleled,” Fosko said.

Sarojani Rao, a 2015 graduate, said Herskovits had so much love despite the hardships most people cannot fathom.

Melanie Barnes, anoter 2015 graduate, said she learned that “what you have endured is something other people can relate to” and “your experience is your truth.”

Passner then read a letter from Emely Morales to Herskovits, which said, “Listening to you speak about your experiences made me realize that (people who are) young need to give more thanks to the opportunities we have. We need to be thankful we have opportunities to have a good life and go to the right path if we want to. That we are free and that we are respected just the way we are.”

Superintendent of Schools Janet Ciarrocca commented that especially with the atrocities occurring in Ukraine, “we need to realize that this can’t happen again.”

Barry Duran Harris, president of the school board, said Herskovits had a way of making students appreciate what they have, understand the struggles and acknowledge opportunities.

After a proclamation by the board was read honoring Herskovits’s life, her daughter said she was concerned about the mental toll public speaking would take on her mother, but her mother was determined to continue sharing her message.

“Actually understanding that it made an impact on people who are learning about history and learning about the unjust (actions) of all types of races and ethnic groups, they can see the problems if they are more accepting, that we could have less problems in this world, and I learned that from the students who were in the audience of my mom’s,” Hannah said.