Press box at Lombardi Field at Bob DeMarco Stadium to be named after ‘Mr. Old Bridge’ 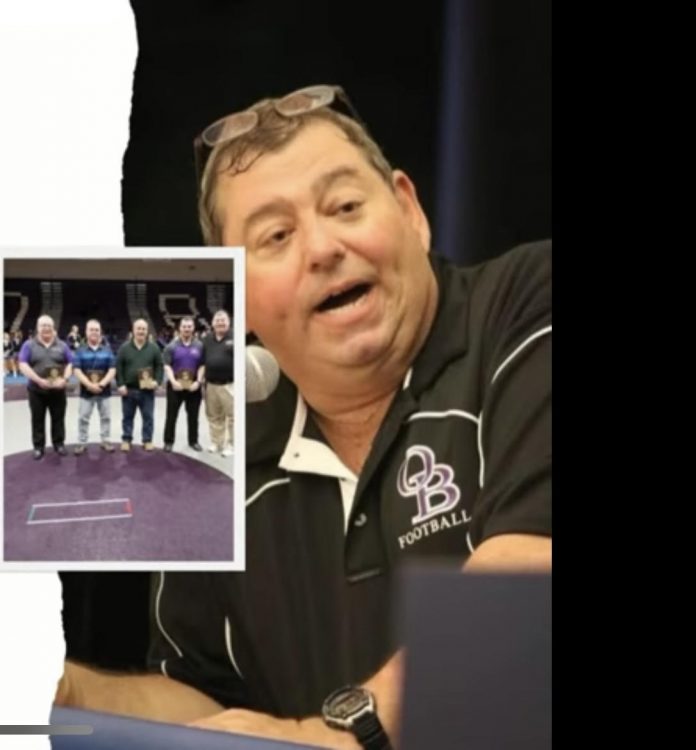 For 28 years, Mazzola could be found announcing the Old Bridge High School (OBHS) football games every Friday night from the box.

That is why school officials said it was fitting to name the press box after Mazzola, who was known as “Mr. Old Bridge” and the “voice of Old Bridge football.”

For Schools Superintendent David Cittadino and Schools Athletic Director Dan DiMino, “the only regret is not doing it sooner.”

“We didn’t know how much time we had with Ron,” Cittadino said. “We had plans to name [the press box] after him so he could see it and sit in the box named after himself.”

The Board of Education (BOE) supported the administration’s move to name the press box after Mazzola at a meeting on April 28.

DiMino shared who Mazzola was to the community as a coach, mentor, director and volunteer.

“Ron was always willing to help celebrate our students,” he said. “Through his company [Prestige Imaging], he provided trophies for games, T-shirts for causes and promoted fundraisers throughout the community.”

“He’s given his skills, talents, passion and literally everything he had to offer,” he said.

Mazzola was a lifelong resident of Old Bridge. He attended Old Bridge public schools and graduated from Madison Central in 1978.

As a young adult, he volunteered his time in Old Bridge youth sports as a coach and board member.

Before his very first OBHS football game as an announcer, Mazzola stayed up for two days and painted the end zone in a purple and white checkerboard pattern.

He was a member of the National Association of Sports Public Address Announcers and was once voted GMC’s best public address announcer.

His involvement in GMC’s wrestling garnered him multiple “Man of the Year” awards.

Mazzola was also elected to the OBHS Hall of Fame for his involvement in the schools.

“We have been so lucky to have Ron in our lives,” DiMino said. “He dedicated his life’s work to our schools and community.”

Board member Jill Cali said Mazzola was the go-to guy for the town.

“If there was something he couldn’t get, he knew somebody who could get it for you,” she said, adding Mazzola made their BOE shirts when she served as board president and made her daughter’s sweet 16 shirts. “He was such a lovely guy and gave the best hugs.”

Board President Frank Weber said he has known Mazzola since the early 1980s when his boys started playing in the township basketball league.

“He was a very unique guy, he did a tremendous amount for the community and I’m sure he won’t be replaced for a long, long time,” he said.

Cittadino said one of his favorite memories of Mazzola was when he was in his first or second year as principal of Jonas Salk Middle School. He said he had a student who wouldn’t stay in class and would walk in the hallways during class.

“One day I found him staring at the trophy case,” he said. “He was talking about how much he liked trophies, so I asked him if he heard about the attendance trophy.”

Cittadino went on to tell the student the attendance trophy is awarded to the student who attends class every day. He even told the student a made up named student was in first place. Lo and behold, the student stayed in class and would ask if he surpassed the student in the lead.

When Mazzola heard about the story, he asked if he could make a trophy.

“It was the largest trophy I have ever seen,” Cittadino recalled.

On the last day of school that year, the student was presented with the first and only attendance trophy.

School officials expect to unveil the renaming of the press box for Mazzola on Sept. 1 for the beginning of the 2022-23 football season.