Howell officials will dedicate ‘Wall of Heroes’ on May 12 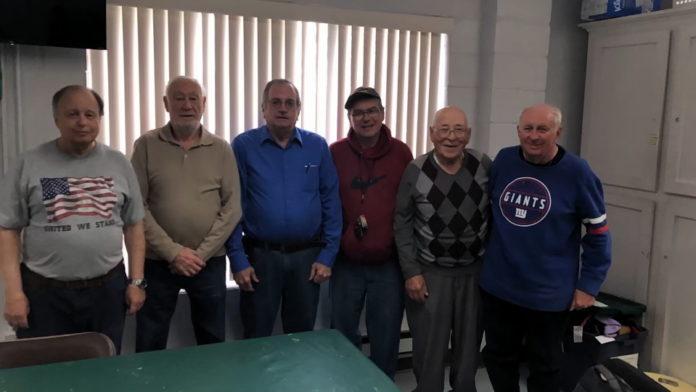 HOWELL — Local men and women who served the nation as members of the U.S. armed forces will be honored with the dedication of a “Wall of Heroes” tribute at the Howell municipal building on May 12.

Thus far, some 53 men and women with ties to Howell are included in the patriotic display that has been created to honor their service to the nation during times of peace as well as conflict.

Deputy Mayor Pamela Richmond is spearheading the tribute to local veterans, which
will begin at 10 a.m. May 12 at the municipal complex, 4567 Route 9 North.

Alison Gee, administrative assistant to the township manager, has been instrumental in coordinating the tribute.

Following a ceremony in the main meeting room, attendees can visit the tribute that has been installed in the foyer of the municipal building where images of each honoree and their military service information will be on display in a scrolling format on a large screen TV.

Richmond said she had been searching for a fitting concept for a tribute wall at the
new municipal complex.

“Being on the Township Council you have the opportunity to work with people and network
and find the right place to bring a concept to life,” she said. “So we threw around a
couple of ideas.”

The result, she said, was a plan to create a tribute honoring the military service of
Howell residents and people with ties to the township.

Richmond enlisted the help of Howell Public Works Director Paul Novello, who was
the commander of the 108th Civil Engineer Squadron based at Joint Base McGuire-Dix-
Lakehurst in south central New Jersey and who served in the U.S. Air Force and in the N.J. Air National Guard. He retired at the rank of lieutenant colonel after 38 years of service.

Richmond and Novello visited neighboring towns to develop a plan for Howell’s own veterans’ tribute.

Novello said he and Richmond began looking at ways to recognize Howell veterans.

“We went to look at a couple of different options and I took them to Jackson and
showed them the wall they have with photos at town hall and they have a Missing
Man Table. (Richmond) liked that idea and took it to Brian Geoghegan, our township
manager.

“We came up with a superb idea,” Novello said. “Instead of hanging photos on a wall, we put up a flat screen television and the TV scrolls the photos. Once we got the scope of the project, I ordered the letters identifying the project as the ‘Howell Township Wall of Heroes.’

“Then I ordered military crests: Army, Navy, Marines, Air Force, Coast Guard and Space Force,” he said, adding that he also suggested the addition of stanchions to connect the components of the tribute.

Novello credits the teamwork involved in creating the concept for the “Wall of Heroes.”

“Alison Gee has been very proactive in reaching out to residents and having them submit a form,” he said. “She came up with a form to make it very simple and it’s online. When you put a couple of heads together a lot of good things happen.

“I came up with everything for the Missing Man Table, my office staff went above and beyond to find everything needed; things like an artificial lemon wedge, you have a lemon on the table for the bitterness of the loss.

“Everything is symbolic,” Novello said. “Salt on the plate to symbolize tears of those who
have lost a loved one. You have an empty chair for the member who is missing, an
inverted wine glass. We need to remember them, especially now. Howell is a big town with a lot of veterans and it’s nice to give them recognition.”

According to Gee, applications will continue to be accepted and veterans or family
members of deceased veterans who were born or who lived in Howell are eligible to
apply.

Applicants are asked to complete and submit the Military Memorial Application Form that is available at town hall and on the municipal website at www.twp.howell.nj.us

“We posted an application online to be included in the ‘Wall of Heroes’ and posted
information at our senior center and kind of used word-of-mouth,” Gee said. “The veterans can fill out the application themselves or it could be a family member who fills it out if the veteran is deceased, or someone who sponsors them. They just have to complete the application, include a photo and use the form.”

According to Gee, the branches of service represented include the U.S. Army, U.S. Coast
Guard, U.S. Navy, U.S. Marine Corps and U.S. Air Force, and there are multiple medal
winners.

Gee created the slide show and continues to get the word out by posting the
application on the website, at the senior center, on Facebook, through networking
and at the municipal building.

“We have gotten a great response so far and it’s going to be ongoing,” she said. “We chose a slide show because we can keep adding to it. … All Howell residents are welcome to be included if they would like.”

A group of Howell veterans whose tours of duty ranged from Fort Dix to Vietnam
gathered at the senior center recently to share their stories. All of the veterans said they are grateful to be included in the township’s new tribute.

“I’m happy to be honored,” said Morton “Mort” White. “There are thousands more
who should be honored.”

“It’s nice to be honored,” said Marvin Siegel, who was a New Yorker when he enlisted in 1969. He served as a U.S. Army Private E2 at Fort Dix in New Jersey.

Vito Calamusa, who emigrated to the United States, said he was called to service in the U.S. Army from 1960-62 during the Cuban Missile Crisis.

“It makes you proud,” he said. “This became my country.”

Jim McHugh, who served as a U.S. Army Specialist 4, agreed.

Dave Chmielewski served in Vietnam during 1971-72 and operated a radio teletype unit at Camp Eagle near Pho Bai. His collection of scrapbooks from that time are filled with photos of life at the camp, heavy military Howitzers and the many stray dogs that lived among the soldiers.

Some people, like Jerry Johnson, who was drafted into the Army in 1968 to serve in Vietnam, paid a price; the lasting impacts of Agent Orange. But Johnson’s sense of humor remains intact.

The impromptu drill drew a burst of hearty laughter from the group.