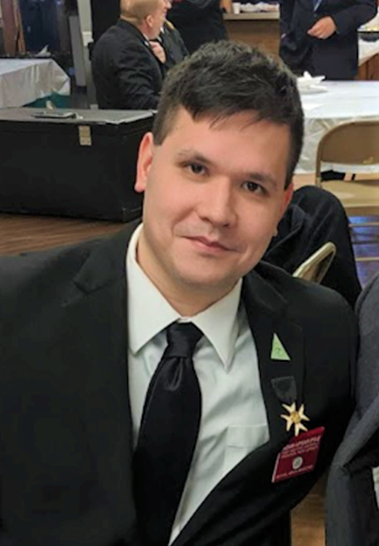 Adam Apgar Pyle of Princeton passed away on May 5, 2022. Born in Hong Kong on August 24, 1985, he was the son of Molly and Thomas Pyle. Adam graduated from Princeton High School in 2003 and completed terms at Rutgers University, Mercer County Community College, and Pratt Institute.

Adam was an extensive traveler in his earlier life, visiting China, Malaysia, Thailand, Philippines, and Australia, and frequently visiting relatives in Singapore. Later he journeyed with classmates and family to England, France, Belgium, Luxembourg, Netherlands, Germany, Switzerland, Austria, Poland, Czech Republic, and Hungary, and went on a safari in Kenya with his father.

Throughout his life, Adam was keenly intellectual, an assiduous autodidact of many subjects. From BMX biking in high school, to history, art, esoterica, religion, and post-punk industrial music, Adam was an engaging expert. He was admired by his family, teachers, and friends for his depth of knowledge and passionate discussions.

In 2007, at age 21, Adam was diagnosed with schizophrenia. Over the subsequent 15 years, many, many challenges ensued, including increasing isolation and depression. Nevertheless, he avidly and stoically continued his intellectual interests, despite increasingly intense intrusions of his illness.

In 2013, Adam was baptized and received into the Plainsboro Presbyterian Church. In 2016, Adam developed an interest in Freemasonry. Together with his father, they were raised as a father-and-son pair to the sublime degree of Master Mason in November 2016 as members of Mercer Lodge No. 50 in Trenton. Received, welcomed, and fully accepted “on the level” by the world’s oldest fraternity, Adam found in Masonry such camaraderie, acceptance, and opportunities for esoteric knowledge that his illness had hitherto robbed of him.

Adam’s illness irrevocably worsened, despite all possible efforts to contain it. Increasingly overwhelmed by harrowing illusions beyond his control, Adam determined not to careen into the abyss, but instead to offer himself unto God. On May 5, 2022, Adam laid his burden down and in God’s arms was taken up to his final rest and much deserved peace.

A memorial service will be held at 11am on Wednesday, May 18th at Trinity Church, 33 Mercer Street, Princeton, New Jersey, 08540. ARRANGEMENTS UNDER THE DIRECTION OF THE MATHER-HODGE FUNERAL HOME. For more information, visit: www.matherhogde.com

3,529FansLike
4,429FollowersFollow
Sign up for our newsletter
Special Sections