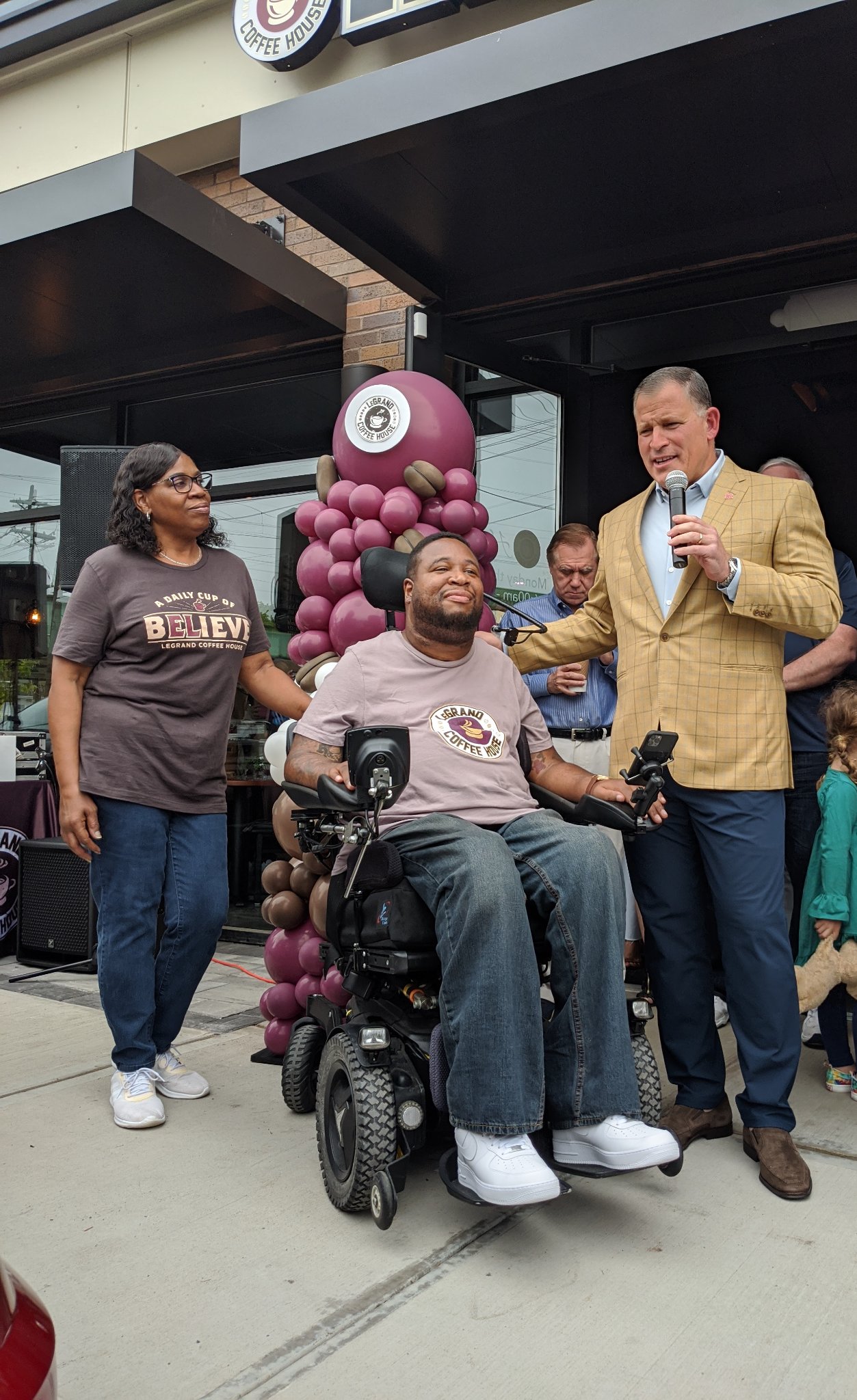 With much fanfare, Eric LeGrand, with his mother Karen by his side, officially opened his brick-and-mortar operation at 10 Green St. on May 14 with the village that essentially carried him from the age of 5 growing up in the Avenel section of the township through college on that fateful day when he suffered a spinal cord injury in 2010 to where he is today.

“I remember when the idea came across in July 2020 and people thought I was crazy. … I thought I was crazy, too, because I didn’t know anything about coffee,” said LeGrand, whose comments brought laughter from the crowd. “But through just all my hard work that I grew up with learning, I said, ‘If I put my mind to it, we can make this happen.’ ”

And made it happen he did, even though he only had his actual first cup of coffee in August 2020.

Through LeGrand Coffee House, he hopes to inspire and provide those who come in a “Daily Cup of bELieve” that will remind them to attack their goals each and every day.

“We have been waiting for this for a couple of years,” he said. “We’ve been working on the downtown bringing in apartment complexes and trying to work on bringing in retail and restaurants.”

The opening of the LeGrand Coffee House is the first tenant opening for the entire downtown development.

Schiano said sharing in the grand opening of LeGrand’s coffee shop is a “proud papa right here” moment for him.

LeGrand has described Schiano as his rock ever since he played football for Schiano at Rutgers. Schiano was with him in October 2010 when he sustained a spinal cord injury to his C3 and C4 vertebrae during a game at MetLife Stadium, and was instrumental in signing him to a symbolic National Football League (NFL) contract as an undrafted free agent in May 2012 with the Tampa Bay Buccaneers when Schiano was head coach for the team.

Schiano shared when he initially made his first move from Rutgers to the Tampa Bay Buccaneers his twin children were devastated and asked, “What about Eric?”

“I said, ‘We’re going to bring Eric with us,’ ” he recalled, which led to the symbolic NFL contract.

Schiano, who came back to Rutgers during the 2020 season, also shared that he and LeGrand have a promise together when a cure comes around: they will go back to the fateful spot on the 25-yard line at MetLife Stadium and jog off the field together.

LeGrand smiled and nodded as Schiano hugged and kissed LeGrand on the head. During his words to the crowd, LeGrand said he may have to sprint and show coach how fast he is. His comments brought applause from the crowd.

Since those days with Schiano, LeGrand has become a motivational speaker, sports analyst, philanthropist, author and now an entrepreneur.

The coffee at the LeGrand Coffee House has caught the likes of local moms Amanda Barcellona, Kelli-Anne Cimino and Jennifer Mazza, who posted their recent experience on their Instagram page The Coffee Fairies.

On the page, they share their experience with visits to different coffee shops and share “what’s tasty with each other and their followers.”

“It’s been forever since Woodbridge has had a local coffee shop,” Mazza said. “We may be partial, but we think it’s something every town needs. And the fact that it’s being opened by Eric LeGrand just adds to our enthusiasm. We’ve been following his journey since his life-changing injury to now and honestly, he’s such an inspiration to all of us. And isn’t that what we all need in the morning with our coffee? A little inspiration. Also, his Sumatra blend is top notch.”

Barcellona said since LeGrand initially began selling his coffee online in 2021, they have always had a bag at the house.

“The coffee is remarkably good,” she said.