For Shaun Sexton, who comes from a Gold Star family, Memorial Day is personal.

That’s because Sexton’s uncle was killed in action during the Vietnam War on Dec. 3, 1969. He was just 20 years old. Gold Star families are those that lost an immediate family member in the military in the line of duty.

Sexton, who is a Lawrence Township police sergeant, was the keynote speaker at Lawrence Township’s annual Memorial Day ceremony May 28 at Veterans Park. He is a veteran of the U.S. Army and served in Operation Iraqi Freedom from 2004 to 2005.

“What is Memorial Day? What is it? Getting stuck in traffic going to the beach, having a picnic? I used to feel that people did not give reverence to Memorial Day when I was younger,” Sexton said.

But as he grew older, Sexton said, he began to realize that the people with whom he served in the U.S. Army would not have objected to it. In fact, “that’s what they would want,” he said.

The U.S. Army is a volunteer army and when enlistees sign up, they raise their right hand and undertake a contract to serve, Sexton said. The contract comes with the understanding that they may have to sacrifice their own lives.

“A general once said, ‘Nobody hates war more than a soldier.’ Lives were lost and lives will continue to be lost. Ask a soldier who lost his life if he would do it again, and he would. That’s how strong the drive (to serve) is,” Sexton said.

Quoting the English philosopher John Stuart Mill, Sexton said, “‘War is an ugly thing, but not the ugliest of things. The decayed and degraded state of moral and patriotic feeling which thinks that nothing is worth a war is much worse’.”

“‘A man who has nothing which he is willing to fight for, nothing that he cares more about than his personal safety, is a miserable creature who has no chance of being free, unless made and kept so by the exertions of better men than himself’,” he said.

“‘As long as justice and injustice have not terminated their ever-renewing fight for ascendancy in the affairs of mankind, human beings must be willing, when need is, to do battle for the one against the other’,” Sexton said.

In his remarks, Lawrence Township Mayor John Ryan reminded the attendees that Memorial Day is about honoring military servicemembers who died in battle. It is a time to reflect on that fact, he said.

“Freedom is not free. As we all come together today, we need to teach the younger generations about the true meaning of Memorial Day,” Ryan said.

The soldiers, sailors, airmen and Marines who gave their lives in war “are true heroes who fought for us, and we should not forget them,” he said.

A visit to Arlington National Cemetery in Arlington, Va. will bring home the fact that the military servicemembers who are buried there “gave us our freedom. (Visitors) will understand why this day is so important. They are all veterans. All gave some, and some gave all,” Ryan said.

Lawrence Township Councilman Christopher Bobbitt, who served as the master of ceremonies, also emphasized the message that Memorial Day is a day to remember those who made the ultimate sacrifice.

“Ask yourself, how could someone do that? The instinct is to save yourself. Look around. I understand why they put their lives on the line. It’s for all of you. They went out and paid the ultimate sacrifice,” Bobbitt said.

The ceremony included reading a list of names of members of Lawrence Township’s American Legion Post 414 and the 112th Field Artillery Association who died during the past year. The artillery association also is based in Lawrence Township.

A wreath was placed at the memorial in Veterans Park, followed by an artillery salute from the 112th Field Artillery Association’s cannon crew. They used a howitzer cannon from the National Guard Militia Museum, which is based in Lawrence Township.

Former Lawrence Township Mayor Frank Nerwinski and his son, Municipal Manager Kevin Nerwinski, raised the U.S. flag on the flagpole at Veterans Park. The elder Nerwinski, who is 89 years old, is a U.S. Navy veteran who served in the Korean War. 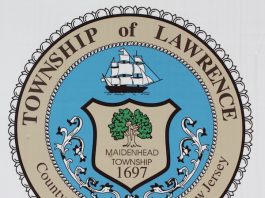 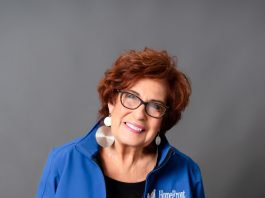