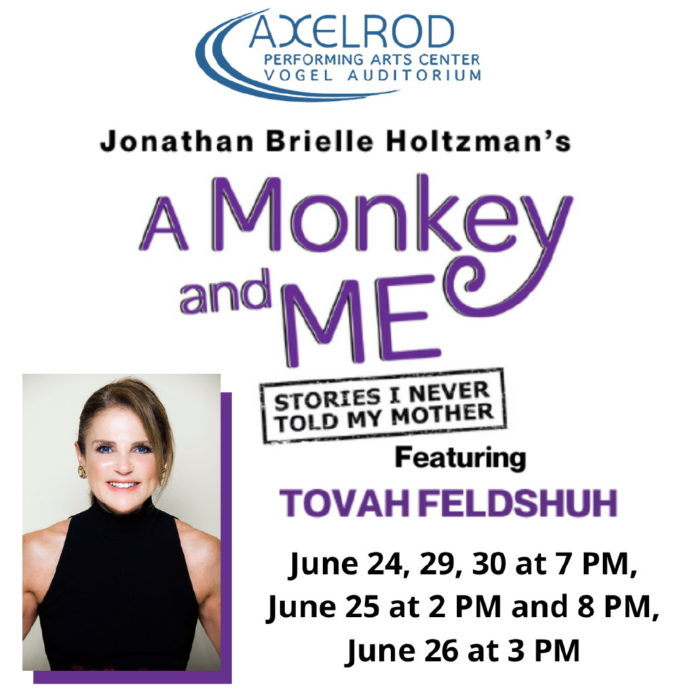 BROADWAY WRITER FROM THE JERSEY SHORE

JONATHAN BRIELLE HOLTZMAN’S “A MONKEY AND ME”

The Axelrod Performing Arts Center will present A MONKEY AND ME: STORIES I NEVER TOLD MY MOTHER, a new musical comedy by New Jersey playwright, composer and lyricist Jonathan Brielle Holtzman, from June 24-30. In this show, Holtzman portrays himself opposite TV and Broadway legend Tovah Feldshuh as his mother. It also stars the award-winning actress, Veanne Cox, as his “monkey.”

Feldshuh’s long list of accolades includes four Drama Desk Awards, an Obie and five Tony nominations on Broadway for Lend Me a Tenor, Golda’s Balcony, Yentl and Sarava. Her work on television has earned her two Emmy nominations (Law & Order and Holocaust). Cox, a Tony, Emmy and Helen Hayes-nominated actress, is the recipient of an Obie and Drama Desk Award and can be seen this season in The Marvelous Mrs. Maisel. Her leading roles on Broadway include An American in Paris, La Cage aux Folles, Caroline or Change and Company.

Holtzman, known professionally as Jonathan Brielle, wrote the music and lyrics for Foxfire on Broadway and for Off Broadway’s Himself and Nora. In A MONKEY AND ME, a semi-autobiographical musical about growing up in Brielle and Deal and graduating from Asbury Park High School, Jonathan wrestles with a monkey from his Las Vegas extravaganza and his theatrical Jewish mother, all in the name of learning to love yourself to find love.

“After developing this piece at the O’Neill Cabaret Festival, it’s wonderful and bittersweet to come home and collaborate with the Axelrod Theater to launch the world premiere two blocks from where my Mom and Dad lived for so many years,” says Holtzman.

“Providing a forum for writers to present new works is one of the goals of the Axelrod PAC, and Jonathan is one of the most respected composers in the Broadway field, serving on the board of the Johnny Mercer Foundation and as the Founder/Writer in Residence of the JMF Writers Grove at Goodspeed Musicals,” says Artistic Director Andrew DePrisco. “I stumbled upon Jonathan when I discovered his wonderful Off Broadway show Himself and Nora. I was stunned to discover that he’d grown up right here on the Jersey Shore. He’s one of the most prolific and creative theater writers I’ve ever known, and the ‘Monkey musical’ is a true work of genius. It will make Broadway lovers sit up and cheer!”

Playing for six performances only, between June 24 and June 30, A Monkey and Me takes place at the Vogel Auditorium at the Axelrod Performing Arts Center, 100 Grant Ave., Deal Park. Tickets are available by calling the box office at 732-531-9106, ext. 14, or online at www.AxelrodArtsCenter.com. Visit the website for the most up-to-date information on COVID protocols at the theater. Ample free parking and group rates are available. For more information, visit https://www.axelrodartscenter.com/a-monkey-and-me.