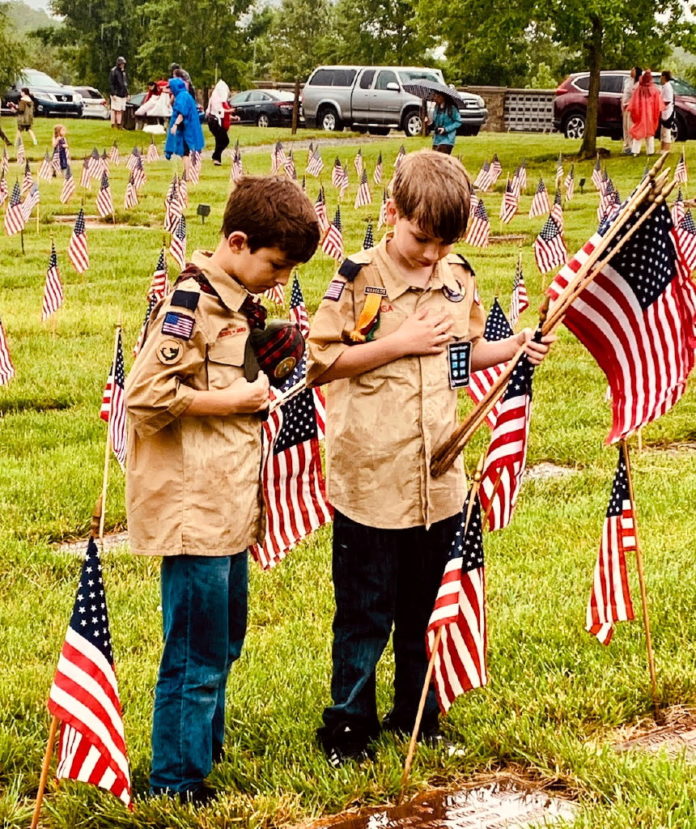 JACKSON — With reverence and respect, a troop of Jackson Cub Scouts will retire worn and tattered American flags at a campfire ceremony on June 11.

According to Cheryl Gerrity, Cub Master for Pack 152, which is based at the H.C. Johnson Elementary School, the flag retirement is an annual tradition that takes place during the troop’s annual camp out.

“The flag burning will be conducted at our private spring camp out,” said Gerrity. “The boys will all be getting their final awards for the year and bridging into the new rank for next year.”

Pack 152 includes 19 boys in kindergarten through fifth grade. The pack is sponsored by the Johnson School PTO.

“We take on service projects pretty often,” Gerrity said. “This time of year it is very patriotic so we do flag placement on graves at Brig. Gen. William C. Doyle Memorial Cemetery in Wrightstown, which is a veterans cemetery, and we also marched in the Jackson Memorial Day parade.

“One of our Scout laws is to be reverent to God and our country. In our pack we all have different religions, but we are reverent to our country, which is a lot of patriotism from every single one of our rank years. So kindergarten, first grade, second grade. Every year has their requirement and one of their badges is to do something a little patriotic.

“And it might be just to attend a patriotic event like the Memorial Day parade … By the time you get into second grade you are learning how to fold a flag, learning how to raise it. And our oath also is, ‘Do my duty to God and my country’ as well.

“We are a very patriotic organization and at our camp out we retire flags; we take in flags that are no longer suited to be flown and do a little speech about them and why we want to be so respectful when we retire them, we don’t want to just toss them in the trash. And then we burn them in the campfire.”

“We usually have some of the older scouts, the fourth- and fifth-graders, read just a little paragraph about the flag and what it stands for and what it represents and why we fly it.

“And also another paragraph about why it is that we retire it the way we do and also how we want to show it respect just as we would show a soldier respect.

Gerrity said the scouts are visibly moved by the ceremonial rite.

“They all seem to get it, even the little ones,” she said. “And it is really quite amazing because they will be quiet.”

According to Gerrity, the Cub Scouts take on other service projects as well.

“We do a food drive around the holidays, usually in November. We just did a clothing drive collecting old clothing and blankets. On occasion we will do a litter pickup,” she said.

“So there is plenty of service involved and each time it teaches another lesson, things about your community that you need to take care of.

“There are many aspects of scouting. We have Scout Law, it has 12 points to the law and that law teaches the kids to be trustworthy and loyal and helpful and friendly, courteous and kind, clean and obedient, thrifty, brave and reverent.

“And each one of those that we give them, after awhile of doing these lessons, you kind of become that person,” she said.

A major focus is on earning badges.

“They all have requirements to them,” Gerrity explained. “So you might be doing a badge called Backyard Jungle. That is one of the younger badges. You go out and see what’s in the backyard, what kind of animals live there and you learn to be kind to them, you learn to respect that it is their home as well.

“We might be doing a teamwork badge, there are some badges that are more geared to learning about each other. So you might play games and learn to work with one another like teamwork challenges.

“There are community badges as well, which are the ones that would teach you to clean up your neighborhood and to do service projects,” she added.

“When you put it all together and look back at the year, you have done so much. You have probably learned about the history of your town, there are many historic sites we can go to around here. You might have learned a little bit about growing, maybe planted a garden, made a birdhouse …

“We go to the firehouse and the police station or they come to us. We have had EMTs come to meetings, and the first aid squad. We have a few emergency room nurses in our pack who have done things for the kids as well. One time we had a police officer come in and do a fingerprinting activity with them. So we get to know our community and everything that goes into being a part of that community,” she said.

“Do they do seem to get it, that they are soldiers’ graves? Yes they do,” Gerrity said. “Before we put the flags out we are like, ‘OK guys, let’s be reverent to these grave sites and remember we are here because of the fallen, because of all they have done for our country.’

“They also see people come in who will leave coins. If you leave a quarter on (the grave) that means you were there when the soldier died; if you leave a penny it means you visited the grave; if you leave a dime you went through basic training with them; and for every coin there is something. So they see that and they ask questions. It is a lot about country,” she explained.

According to Gerrity, girls and scouts up to 18 years old can now join a scout pack.

“There are family packs in the area, the same thing with the older scouts, they call them ScoutsBSA, it stands for Boy Scouts of America. Cub Scouts goes until fifth grade. You can join Scouts BSA when you are 11 to 18. Scouts BSA is for troops, it’s just another level of the program.”

To join a pack, visit BEASCOUT.org and enter a ZIP code and whether you want to join Boy Scouts or Scouts BSA. Local units and contact information will be provided.