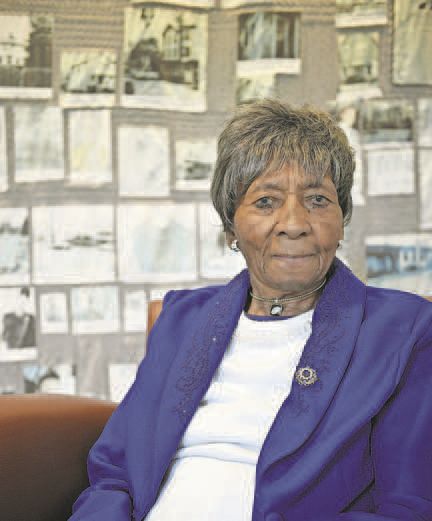 If there is one thing that defined Laura Wooten, it was her unwavering dedication to the election process in her community and in the United States of America.

For 79 years until her death in 2019, Wooten – the longest continuously serving poll worker in the U.S. – sat behind the voter check-in table, first at polling places in Princeton where she grew up and then for 30 years at polling places in Lawrence Township after she moved to be close to family.

That dedication to service is why Princeton University – where Wooten worked for 27 years, checking meal cards at the entrance to Butler Dining Hall – is renaming Marx Hall on Washington Road in her honor effective July 1. The building is the home of the University Center for Human Values.

“The addition of Laura Wooten’s name to the tapestry of our campus will recognize Princeton’s history, the breadth of our community and the positive impact that one remarkable person can have through lifelong dedication to public service and civic values,” said Princeton University President Christopher Eisgruber.

Wooten’s status as the longest continuously serving poll worker in the U.S. is a “rare and exceptional achievement” that offers an example of how ordinary citizens can provide extraordinary services to the country, said Beth Lew-Williams, who is the chairman of the Council of the Princeton University Committee on Naming and an associate professor of history.

Melissa Lane, who is the Class of 1943 professor of politics and director of the University Center for Human Values, cited Wooten’s “unparalleled record of civic service.”

“Studying in a building named for her will inspire the work of students in the University Center of Human Values’ Program in Values and Public Life,” Lane said.

Last year, Gov. Phil Murphy signed into law “Laura Wooten’s Law,” which requires civics instruction to be taught in the middle school. The law directs the state Department of Education to require at least one course in civics or U.S. government as a requirement for middle school graduation, which began this school year.

Wooten started as a poll worker in the former Princeton Borough in 1939. She did not miss an election – for school board, the political primaries or the general election – until 2018. She was 98 years old when she died in March 2019.

In a 2016 interview with The Princeton Packet, Wooten said she enjoyed being a poll worker. She described herself as a “people person,” and said she liked to be around people. It’s also why she continued to work for more than two decades at Princeton University’s Butler Dining Hall.

Wooten became a poll worker at the suggestion of her uncle, who was seeking election to become a justice of the peace in Princeton Borough.

“My uncle, Anderson Mitnaul, was running for justice of the peace and he talked me into being a challenger,” Wooten recalled. A challenger makes sure that a citizen is eligible to vote and checks off that person’s name in a book that lists registered voters.

When she began as a poll worker in 1939, Princeton was a small town where people knew one another, Wooten said in the 2016 interview. She moved to Princeton from Goldsboro, N.C. when she was 4 years old and grew up in the Witherspoon-Jackson neighborhood.

Paper ballots were in use when she began helping out at the polls in 1939. When the polls closed, someone had to turn a knob on the voting machine to get the county for the candidates. A poll worker signed the results. Now, ballots are counted electronically.

Wooten commented on the low voter turnout in the 2016 interview with The Princeton Packet. She had said “it’s a shame because so many people are registered to vote.”

“I try to tell people to vote because it is necessary. They don’t exercise their right to vote. They think, ‘My vote won’t help,’ but it does. They say they are not voting, but they complain nothing gets done. Their vote does count,” Wooten said.

And as for her uncle, Mitnaul, had won his bid for reelection as a justice of the peace in Princeton Borough.