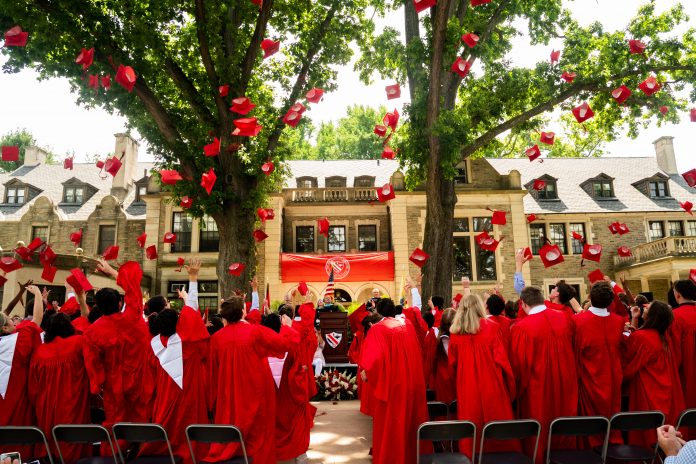 The Hun School community in Princeton celebrated the accomplishments and achievements of 154 members of the Class of 2022 during the School’s 108th commencement.

This year’s commencement also celebrates 50 years of girls and women at Hun.

“All of us who appreciate the benefits of living today in Hun’s thriving co-educational environment owe those first girls a debt of gratitude,” Head of School Jonathan Brougham said in a press release from the school on June 10.

But he also acknowledged the challenges the 2022 class has faced during their tenure at Hun, including the loss of a classmate during freshman year. His cousin accepted an honorary diploma in his honor.

The Class of 2022 was in their sophomore year when the pandemic began, launching students into remote learning and then hybrid instruction their junior year.

Valedictorian and Student Body President Gabe Huang reflected on his high school career, calling it “a series of hills,” according to the press release.

During freshman year, he took a public speaking and debate course that challenged him to create and execute debates against sophomores with more experience. His hard work paid off, and he continued working hard through the remainder of his time in the Upper School, especially when, according to him, he wasn’t the smartest student in the class.

Gabe told his classmates to, “charge up this hill. And then charge up all the other ones.”

Salutatorian Cici Liang, editor of the School newspaper and an accomplished STEM (Science, Technology, Engineering and Mathematics) scholar, reminded her classmates that uncertainty will always be a part of life, but that they must not let it paralyze them.

“As long as you are moving, no matter if it’s sprinting forward or crawling forward, you will arrive at the place that is right for you,” she said, in the press release. “Therefore, don’t be afraid if you don’t know what to do next. Give yourself a chance to stay and explore uncertainty, and the best is yet to come.”

Cici will matriculate at Georgia Institute of Technology in the fall.

Student speaker Kiera Hahn, who Broughman described as ‘a friend to everyone,’ reminded her classmates about the feelings they had when they first came to Hun. For her, those feelings were anxiousness and nervousness about beginning a new chapter in her life, as a boarding student. But she quickly found her footing at Hun; the dorm parents who baked cookies while she talked, the teachers she would pop in to say ‘hi’ to and the community she felt at dinner, according to the press release.

“I’m leaving behind memories and people, and life will never be the same as it is here,” she said. “While this makes me sad, I know that those moments, which become memories, are with me always. They shape who we are, who I am, and remind us of what we can make it through.”