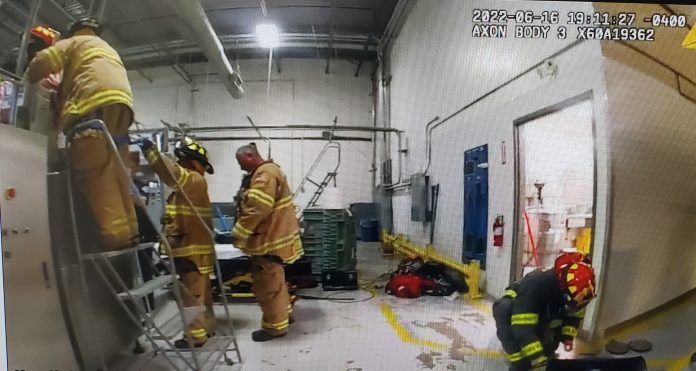 SOUTH BRUNSWICK – First responders had to “develop several plans” and use “a number of different manual and powered tools” to help free a Loving Pets’ employee whose forearm got trapped in a machine, according to Monmouth Junction Fire Chief Scott Smith.

First responders arrived to find a 54-year-old female employee with her forearm impaled and trapped in a machine in the production area of the business. The worker was standing on a portable stair when she put her arm into the top of the machine, apparently to clear material inside when a rotating bar moved and she was impaled through her forearm, according to police.

EMTs and paramedics stabilized the patient while firefighters worked to free her arm. Firefighters first secured the power, then used hand tools to disassemble the section of the machine where the worker’s arm was trapped. After disabling the rotating bar, firefighters used several different powered cutters to remove the bar from the machine to free the worker, which took approximately 45 minutes, police said.

EMTs and firefighters placed the employee on a backboard to lower her from the stairs. She was then placed on a stretcher where her arm was packaged for transport to Robert Wood Johnson University Hospital in New Brunswick, where the mixing bar that impaled her arm could be safely removed, police said.

Smith said the call was “a challenging rescue for first responders.”

“The worker was in an elevated position, so firefighters had to work from ladders to access the top of the machine where her arm was trapped,” he said. “Due to the construction of the machine and limited access, we had to develop several plans and use a number of different manual and powered tools to free her arm. Everyone did a great job under tough conditions.”